Few countries in the world have produced as many artist-potters as Japan: and of these, Shoji Hamada stands out as one of the greatest.

The present handsomely-produced book takes the reader at an unhurried pace, by means of a dialogue between Bernard Leach and Shoji Hamada, through fifty-five years of life and potting experiences. In the world of pottery, Leach and Hamada have been messengers between cultures on opposite sides of the earth: Bernard Leach mainly through his writings, and Shoji Hamada by the practical example of his work.

This book, by means of words, photographs and lively sketches, offers the opportunity to become acquainted with the man behind the pots - a man who has been designated 'A National Living Treasure' by the Japanese government.

For the lay reader without knowledge of Cornwall and the characters mentioned, the early part of the book must seem like Cornish heavy cake - full fare! Gradually an enrichment takes place, with ideas and a philosophy matured over a life-time. They discuss (among many other things) 'work harmony'; 'the life in the object'; 'receiving and growing'; 'taste and feeling'; 'work from the whole body'; 'mingei - the concept'; 'clay'; 'facility, form and signatures'.

Shoji Hamada by his thinking, his approach to his work and pots, is an example that offers relevant, suggestions of 'a way' to contemporary craftsmen coping with problems of the twentieth century. He is concerned about the role of the artist-craftsman today and believes in using the power of healthy: traditions as a source and spring-board. 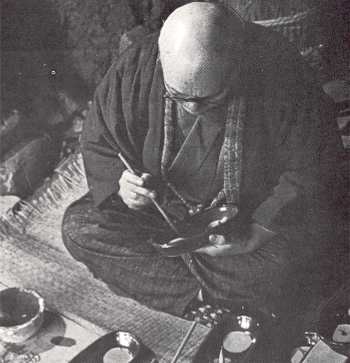 The virtues of Hamada's pots are the virtues of the man himself. His pots are assured, warm, spontaneous, robust and earthy in feeling. The modulations of his pot forms are intuitively determined. Hamada wants to keep his pottery simple and uncomplicated. He has gone back to three sources...

First: he has recognised that the character of pottery is almost entirely dependent on good natural materials - and that this should be the fundamental conviction of every potter.

Second: he is convinced that the beauty of pottery finds its fullest expression only when it is linked with utility.

Third: it has been his aim to restore the making of pottery to its former position as an open craft in which anyone may share.

It is Hamada's way to draw as close as he can to the world that is natural, common and simple.

Pictures of pottery are but a limited substitute for the essential need to touch and handle pots: but the high standard of the forty colour plates and forty-eight black-and-white photographs in the Thames and Hudson book offers more than a suggestion of the character of Hamada's pots. At first glance his work may appear to some to be crude. It represents great care, thought and spiritual concern however. The boldness of decoration and stunning abstract beauty of the glaze trailed dishes (plates 16 and 17); the beauty of materials metamorphosed and enriched by fire in a bold partnership with the forms as in plates 12 and 13; or the strong form of the bottle (in plate 7), finely balanced with a softness of line and unmistakable plasticity of clay, are just a few of a wide range of fine pots illustrated.

Those of us in New Zealand who had the opportunity during 1965 to watch Shoji Hamada working on the potter's wheel realised how his mind works through his body. A flow of unhurried, decisive movements from his hands or the bamboo tool determined the thrusts and curves of his pot forms. Behind the hands and eyes his mind, warm and cool at the same time, made fast intuitive decisions. The spinning form of the pot responded and became an energy-charged expression of the man.

At his workshop at Mashiko the atmosphere of work is related to living: there is a rhythmical flow. Hamada will decorate more than five-hundred pots in a working day. His better pots are set aside until late in the afternoon.

Of himself, Hamada has said that it was after reaching the age of seventy that he began to feel mature. In talking about his approach to pot-making he has commented that techniques are difficult enough to learn: '... it took me ten years to learn them but twenty years to forget them... it is the experience - how the experience is accepted - that is important... knowing things sometimes impedes the power of the observation. .. "Good taste" is a formula, but it is not so with "feeling" . . . I often wish that people would take a step further and apply non-established, non-accepted standards and select work that has the true directness of feeling, even if it is lacking in the expected taste. .. If we reflect on our motive for making pottery we can make a start without mistakes.'