Stephen Bambury Small Paintings 1977-1978
Many people expect abstract paintings to be big; to occupy a lot of wall-space; to state their presence primarily by size alone. This is implicit in Stephen Bambury's statement accompanying his exhibition of fifteen small abstract pieces. To quote: 'My production of small works falls within two distinctive areas of concern. There is the work that is conceived and executed with complete regard to the making of small works. I have no intention of 'scaling up' these paintings. Secondly there is work that I regard more in the nature of 'test pieces'. Although these works do not transpire directly into larger paintings, they nevertheless inform the making of such larger work. In both cases however, I regard the work as completed statements.'

So what did we have? Three 'themes' were being pursued. There were a number of Area Co-ordinates. One, subtitled Grey and Pink, featured a rectangle of purplish colour, through which the ground occasionally emerged, one canvas that seemed to have been slightly roughened. Two very small oblongs, one pink, one grey, intruded into this space from the top and left edges: a spare basic image the success of which depended on the 'rightness' of the placement of the various segments and the interrelationships of colour and texture. There is little margin for error in this sort of work, and not surprisingly some of the Area Co-ordinates didn't really come off.

These were the earliest works and seemed tentative in comparison with the other two later types. The Dichromatic paintings on steel were much more assured and interesting pieces - again rectangles, both horizontally and vertically disposed, divided into segments, some enamel painted, some left bare. For instance, in one, a purplish area with touches of red glimpsing through was set against an equal-sized steel area, slightly weathered, with rust marks beginning to appear. The whole was mounted on a black board. The resulting interplay of textures, materials and colours was most sensitive: likewise the third type  - so-called Co-ordinates on board. For example: Vertical Six comprised six segments, one on top of another, variously coloured in whites, greys, pastelly pinks, oranges and blues - with either tiny oblongs or pencil-line thin arcs or diagonals contributing to the ensemble - a series of elegant interactions. 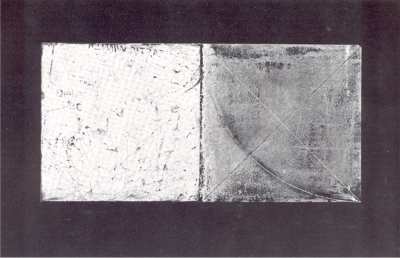 In all these paintings the limited means, the severe 'geometricisation' of structure; the mechanistic titles, provided necessary counterpoints to the complex play of almost pretty colours and the delight in textures that otherwise might have been merely 'decorative'. My favourite painting in the exhibition was Dichromatic Diagonal. A rectangle of arid, almost flaky white, cracked, with some red underpainting showing through and some touches of blue on top, was juxtaposed against another 'rectangle'. In fact the latter was made up of two triangular pieces of board divided by a narrow diagonal channel from left bottom to top right hand corner that at first glance seemed as superficial as a balancing painted silver diagonal from bottom right to top left. These triangles featured delicate pinks, mauves, light blues, mottled (with some fugitive lettering) newspaper imprints - further complicating the surface play.

It is nice to see an abstract painter creating images that 'work', that have some presence. That's his job. It's not an easy one. Stephen Bambury with this exhibition joins the small band of New Zealand abstractionists, most of them very dedicated, who have produced goods worth looking at.