The Turnbull Library and the Public

The Alexander Turnbull Library is a State research and reference library. This in itself creates something of a paradox. Not a public library, the Turnbull is owned by the people of New Zealand: so it is open to all, free of charge. But by its very nature as a research library its holdings cannot be immediately accessible. It is one of the very few 'closed access' libraries in New Zealand, no direct borrowing being allowed. As well, only a small proportion of the holdings are on view and of these very few are available on the open shelves. The user of such a library has to know what information he wants; and then he needs the assistance of specialist staff to be sure that he gets it all. For the casual visitor, although the situation will change radically when the new National Library building becomes available, in the present temporary premises there is relatively little to see apart from the regular exhibitions in the main display area. 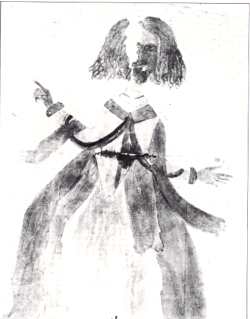 One of a collection of Maori sketches illustrating dreams taken from the body of Aporo under a waterfall at Poripori, 23 January 1867, by Captain Gilbert Mair

As a public institution the library has long recognised that it has a special obligation to make the collections more accessible to the general public in ways that are appropriate for a research library. The collections are taken to the public through the innumerable publications at all levels that draw on the library's resources - from the academic study and the school textbook to the popular illustrated account of New Zealand history or the school or church or family history; through the media in all forms, and through touring exhibitions or items lent for exhibition in other Institutions.

It is likely that for most New Zealanders their contact with the library will be at some remove. Those who want a more personal contact may join the Friends of the Turnbull Library, who arrange meetings at the Library and publish the Turnbull Library Record twice a year, as well as greeting cards and other publications from time to time.

In spite of this apparent remoteness of the Library's collections from the general public, New Zealanders have always had a warm relationship with the Turnbull as evidenced by the thousands of donations and bequests received over the last fifty years or so, ranging from single photographs or letters, to large libraries or an entire estate. The Alexander Turnbull Library Endowment Trust has benefited from substantial cash bequests and in its turn has regularly assisted in making major purchases beyond the normal resources of the Library. In the last six years the Trust has contributed in excess of $150,000 towards important acquisitions. Part of the Endowment Trust's funds comes from profits from the sale of the annual series of colour prints reproduced from original paintings in the collections.

The Endowment Trust is about to initiate an ambitious programme of research scholarships, grants and seminars to encourage greater research use of the Library's collections. This emphasis (a new one for the Endowment Trust) on scholarship based on the Library's collections is in line with the policy of other great research libraries throughout the world. The value of any research library is measured by its contribution to knowledge, to the next generation of books produced by the scholars who work with research collections.