The Two Worlds of Omai

The Two Worlds of Omai was an attempt at a trans-cultural essay built round the story of a Tahitian who was carried back to Europe in 1774 by Captain Furneaux. The show was a mixture of success and failure.

The concept behind it, the inter-relationship of European and Pacific art, was very good. In fact, the comparative understanding of these cultures is crucial to our imaginative future as a Pacific, yet European people. There was a suggestion in the exhibition of the complex interweaving of these two world visions. Also, there was implicit in the presence of the Maori carving the fact that New Zealand was part of the Oceanic world of Omai, though distance made for the development of distinctive cultures within that world. All these facts of our past are so self-evident that they are generally forgotten.

There is a Polynesian past; a past of which New Zealand is a part; a past which we ignore at our peril if we are concerned at all with the evolution of an integrated social and artistic consciousness in the Pacific Basin.

The soul-identity of New Zealanders, their symbolic life, has long been a matter of introspective, almost morbid concern to them. If we discovered ourselves to be not so much insular beings living within the brooding influence of a landscape we fear to comprehend, and saw ourselves as part of an oceanic world whose space and perspectives approach the feeling of infinity: if we could grow towards this we would grow through a new aspect of our humanity. 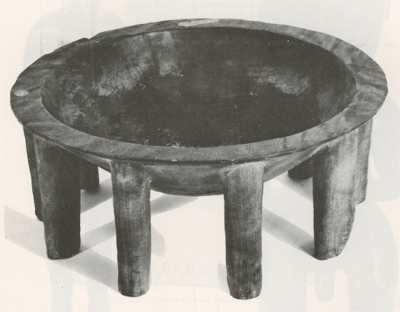 An exhibition which touches on this theme should touch significance. But there were glaring weaknesses in the expression of the theme. The show as a whole is disjointed. One of the prime reasons for this was the lack of a catalogue, and this lack I felt particularly when looking at the Pacific artefacts. They needed far more dating and in-depth explanation than they received. As it is, the theme of the show is fragmented.

What was possibly needed was a three-dimensional essay that showed the actual process of cultural interchange and transmutation. This might have involved a display reaching right into contemporaneity, revealing the gradual disintegration of Pacific culture, as well as the ways in which it affected the European tradition. For me a painting by Tony Fomison is as much an expression of the meeting of Omai's 'two worlds' as anything else. A good photographic essay on Papeete or Ponsonby could also reveal part of the process. The modification of Omai's native culture, its eventual near-destruction, are not obvious from this exhibition. A full-scale articulation of the theme of two worlds should have perhaps included material on the steam engine, the evangelical revival in the English Church, the firearm, the jet plane and the whiskey bottle. All in their varying ways were to end the native culture.

So the show was inert as an essay in culture contact. But individual works in it, particularly the Pacific artefacts, were very strong.

The European pieces, which provide a very incomplete background to the 1770s and the expeditions that explored the Pacific, were of documentary rather than artistic interest. There was little amongst them that revealed the deeper cultural processes of the time. The Omai portrait was more symptomatic than most in this respect. We were shown its evolution from a narrative drawing to the idealisation in which Omai stands as a Levantine superman, gazing down the perspectives of his destiny. 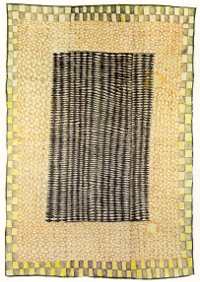 This 'noble savage' is eloquent of a cultural self-consciousness that was part of the mental life of Europeans by the second half of the eighteenth century. In a way it is the beginning of an anthropological outlook by which native cultures, though idealised, were thought worthy subjects for study in their own right.

The metaphysical life of Polynesians is carved into the three silent dimensions of their wooden structures and implements. Totemism is stamped on everything. And this is our clue to the multitudinous worlds inhabited by Polynesians throughout Oceania. They express style. And this style is nothing less than the implicit belief in the mythological shape of the world: a belief disappearing from the European world.

In these various societies ornament and function were usually inseparable. A god-figure or an anchor stone, a spear or lintel all had a purpose which was at once physical and metaphysical, functional and symbolic. Form springs immediately from nature: the curvilinear, the slightly asymmetrical ornamentations arise from experience not as yet conditioned by mechanical exactitude and scientific perspective. 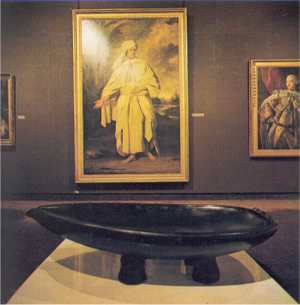 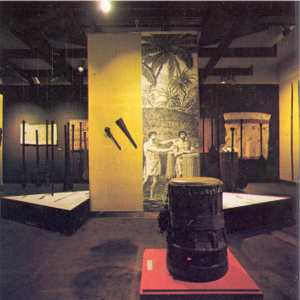 There were objects of spectacular beauty: a sacred bowl of black dolerite, Tahitian in origin, intricately ornamented ceremonial paddles and spoons from Raivavae, some beautiful tapas. There was no lack of fine work, drawn mainly from the collections of the Auckland Museum.

It is these artefacts rather than the collective impact of the exhibition that made a visit to The Two Worlds of Omai well worthwhile. But the idea of multi-cultural exhibitions with an historical perspective that points to the inner form of our cultural evolution is not wrong. It is right, and it should be developed more adequately than it was in this case.

The Auckland City Art Gallery did in fact publish a well-designed and expensive catalogue to the Omai exhibition about a week before the exhibition was due to close, and after Denys Trussell had written his article.