An ad hoc assembly of artists whose annual collective exhibition formed a high point in the Christchurch exhibition calendar for years, has wound up its affairs. For a good part of half a century of existence 'The Group' provided an important forum for young and not so young artists alike. But time had taken its toll. The 'Group' exhibitions - heterogeneous collections of the most diverse work - had become memorable more for their quaintness than for anything else. Although in the catalogue to a November retrospective 'Group' show at the Robert McDougall Art Gallery, Trevor Moffitt, a staunch member, could write of 'The Group'; '...by ceasing to exist it will allow the focus to fall elsewhere', in reality it had already done so many years ago. The demise of 'The Group' is simply the outcome of a recognition by its members that it kind of activity, highly significant in the 'forties, 'fifties and early 'sixties, was no longer appropriate to the changed conditions of the late 'seventies.

The occasion was marked in Christchurch by two recent exhibitions. One was the final Group Show in the traditional venue, the Canterbury Society of Arts Gallery. The other was an anthology show of works taken from 'Group' exhibitions of the last fifty years, and was mounted by the McDougall Art Gallery. 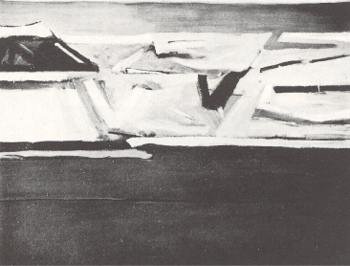 The C.S.A. show was no better or worse than those of previous years - the same large assortment of disparate works amongst which individual pieces of merit could be found. Olivia Spencer-Bower showed a small cycle of polychrome linocuts, which, although dependent to some extent upon Cleavin's latest Jeanette etchings for their imagery, were quite remarkable pieces. Strong and assured, they were exciting evidence that Spencer-Bower, the grand lady watercolourist of Christchurch painting, still possesses a vitality and willingness to tackle new problems.

Although Cleavin did not show any of the Jeanette etchings, four of his remarkably delicate contour-line life drawings of Jeanette, in fine pencil upon a hard white paper, were included. Fomison was represented by three small paintings, strongly geometric in their organisation. large plane areas of tone dominated small shadow-bound mysterious figures. Philip Clairmont occupied an entire bay with a triptych and three other pieces. Gutsy, powerful painting to be sure, but, by now, very familiar. Hotere showed three superb lacquer panels, and Bracey two small magnificently controlled works on paper with the flying fragments on a green field which has characterized his response to the landscape since returning from Tasmania a few years ago. MacFarlane, Hanly and AIbrecht, each in their own unique Nay, revelled in the sensuous glory of paint - and very successfully too. Outside of that group it was dull, predictable and easily forgotten.

The McDougall show, by contrast, contained more of interest. Perhaps that was because of its historical nature, the works being drawn from the period 1926 to the present day. Certainly it was not because of its installation. In his introduction to the McDougall catalogue, Bruce Robinson suggests that 'The Group' was originally formed (in part) as a reaction against the 'bazaar-like' exhibitions of the Art Society. How ironic that that should turn out to be the very nature of much of this retrospective show mounted by the McDougall. With two other exhibitions on at the time, the gallery demonstrated, for all to see, its startling spatial inadequacies. The centre court was crammed until it took on something of the nature of a claustrophobic flea market. Works were compelled to compete with each other, with a clutter of screens and a dominating architecture, in a struggle to catch the visitor's attention. It was a bewildering and wholly unsatisfactory experience.

In spite of the disadvantages of the environment, many works were able to hold their own; and certainly some exceeded that, in itself not inconsiderable, achievement. One hundred and seventeen works, not always the best examples one felt, represented the life of this exceedingly diverse group of painters. It was an interesting and worthwhile effort, but both the exhibition, and more so the catalogue, fell short of adequately documenting the 'Group' phenomenon. The task, in important one, still remains to be done.

In a sense it is sad to see the end of 'The Group' - it was the last remnant of an era which most remember warmly. 'The Group' was synonymous with the Durham street art gallery and a special kind of excitement and enthusiasm: one which I remember vividly from the tail end of its vital years - the late 'fifties - and the early 'sixties - years when it was already beginning to become evident that The Group' had reached a peak and begun the first steps of descent.

Removed from Christchurch, McCahon, more than most 'Group' members, was aware of what had begun to happen: 'I became a member in 1940 and went up to Christchurch to see this first showing. I was bowled over by the spaciousness and some hanging of the exhibition - you could see the paintings'

...from '47 to '52 I was at the various openings - cider and beer - plonk and beer - and this strange insurgence of the wealthy, and to be asked to a Group opening was to put you one step up the social ladder. The rot started. The elite's society of art - this move bred all sorts of changes ending in a tragic marriage with the Art Society. The Group began as a worker orientated gathering of artists and became top heavy - a true art society. The Group wasn't made by a revolution, but it did become revolutionary; and died as respectability forced the doors'.