Max Gimblett's a New Zealander. This show, first seen at Barry Lett Galleries and later touring several public galleries, is his first in New Zealand. No artist when he left in 1959 - he was twenty-four - he's returned (briefly) very much the professional painter. Five years in New York have seen to that.

He brought with him four medium-sized (60" x 70") canvases and a number of works on paper. The format for all is as follows: a single colour-field is interrupted by two thin bands of the same shape, size and colour. One band runs parallel to, and at a short distance from, the vertical edge of the field, but stops short of the top and bottom edges. The other does the same along the opposite edge. The paint, matt acrylic, is applied in quick, broad and even brush strokes. The bands are formed with the help of masking tape. 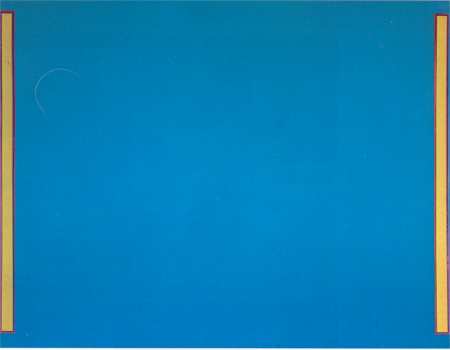 This simple, hard-edged format lends force to the intense combinations of 'clashing' non-complementary colours. In these instances, variations on red/yellow and blue/red. Burn - Homage to James  Baxter is a red field with blue bands, New Zealand Blue, a blue field with pink bands. Shiva - Shakti a yellow field with red bands, and In the Pink - Left and Right a pink field with yellow bands. first impressions are of hard, fierce, rather nasty pieces of work. There's a vulgarity about the colours and the scale doesn't leave the eye much room to rest between the bands.

On the other hand, these paintings do not mean to take the viewer by force. Painting and viewer are equally matched, because of the scale. Really large works effectively deny the viewer the single viewpoint implied by the scale of conventional easel painting, but Max Gimblett's paintings are not so large as to stop the viewer taking a position and getting their measure from there from that point on these paintings begin to relent. Each, it appears, has a past. Gaps in the field - mostly along the top and bottom edges - reveal vestiges of a previous field - mostly the same colour at a lower intensity. Similarly, vestiges of paint along the edges of the bands chronicle other lives in which field and band must have been composed of quite different colours. Move closer to Burn and you'll find traces of yellow, green, red and blue. I say these paintings relent because such revelations of process embarrass the single-mindedness of the works as we first find them. Each painting could be many other paintings and is open to interrogation on that basis.

Edges, then, are where the action is. There are three kinds of event (1) the 'clash' of non-complementaries (2) the story of successive unmaskings of the bands (3) the revelation of the penultimate colour-field. Compared to works which precede these, the latter two events are severely understated. This effectively separates them, one from another. for example, the impact of the yellow on green in Chinese Emerald (see illustration) is less than it might be because of the colours chosen but also because of the calculated interpolation of distinct vestiges of red and black areas. The vestiges on the edges of bands in Burn, on the other hand are simply the natural result of repeated use of tape.

Consequently, in Chinese Emerald (1) cannot be experienced separately from (2), but in Burn it can. If, as I assume, the process aims at the consummation which is the present life of the painting, the earlier painting seems comparatively contrived, nostalgic. The events are worth separating because each indicates the past and present of the painting in a different way. That is, the unmaskings of the band is understood tactilely and theoretically as much as visually. (1) and (3) are understood visually but they activate the field differently, (1) through juxtaposition and (3) through the overlaying of not quite opaque colour.

Max Gimblett works on several paintings at once, for about six months. The quality of feeling each possesses would seem to depend on the artist's ability to identify with the work's coming into being, to recognise when it has a life of its own and when it is time to stop. At least that's the conclusion I draw from the most satisfying of his paintings. In works like Chinese Emerald the rules for making the painting have been elaborated so that the artist is tempted to interfere more than he ought. The rather simpler procedure for works like Burn tempts him to finish off a painting rather than let it be at the right time. The longer looked at the four paintings in this show the more I came to prefer Burn  and Shive - Shakti to In the Pink and New Zealand Blue. The latter two seemed all impact, finished, the former two fine-tuned and alive. The trick, I decided, was to set up between the almost unstated archaeology of the work and the loud proclamation of its presentness, a reasonance that was like the emergence of a feeling. With Burn and Shive - Shakti that's what happened.

This was Andrew Bogle's first one-man show. It was not tight. The etching and acquatint cloudscapes are relatively uninteresting and don't appear to bear much on the screen prints. Actually, the show draws on a number of years' work. Had you Bogle's prints at heart then the looseness might trouble you. I don't. I've no great interest in print-making, reckoning as I do there's little future in it. I like the drawings much the best and since they were also the most recent, I'm inclined to look for Bogle's future in them. The prints provided a background, a run up, to them. 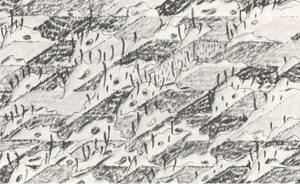 As print-maker, Bogle is less involved in the image produced than in the processes by which images are brought into being. As his titles suggest - Nocturne, Rainbow, Mandala - a certain evocativeness is not denied. That it's somewhat incidental, however, is indicated by the use of the same motif in works as disparate in mood as Skid, Cancellation Proof and Rainbow. Most of the screen prints have their origin in a kind of doodling, a letting materials do their thing - Spill, Nought and Nocturne use screens made from photographs of ink spills. Then the resources of the print-maker come into play. Into play, but self critically. For the print-maker can do anything he likes. While Bogle exercises his freedom fully he is always setting the fluidity and the 'naturalness' of material and gesture against the fixities of shutter and screen. The best prints head either towards the delicate balance of Equilibrium or the cunning ironies of Cancellation Proof. This latter, from another angle, admits a certain defeat. Shutter and screen capture more than they release.

These drawings have scale. The medium here (ballpoint or graphite, and coloured pencil), less knowing, more casual, suits their size. They are more modest and intimate statements than are the prints. Some element are familiar. Out of lightly sketched grids poke irregular fluid or spiky (growing) shapes. They have a doodling air. Nothing's at loggerheads here except that the world they depict is not our own. They do depict a world. Imagery seems more important. We're presented with the landscaped is it? gardens of another Nature. Or is it? Say, rather we're invited to entertain . . . The doodling again. Also, the ambiguities introduced by the grid. If the 'surreal' is to have any use in our art it had best have the virtues of these drawings.