Paul Johns, a young Christchurch artist who studied film-making and sculpture at the Canterbury School of Fine Arts, exhibited last year in Wellington and Christchurch, and, most recently, here in Auckland. At Peter Webb Galleries he showed photographs, serigraphs, some constructed 'household objects'.

There was a series of Crosses in silk-screen, variations on a minimal image; a skeletonic pyramid (deriving from the one most of us first read about in Lyall Watson's Supernature); a bemusing and somehow sinister Chair, bolted together from 'Norwegian Wood', with seat and back of perspex; and the photographs - most of them montages of one kind or another.

I found Johns' work in photography the most approachable and original of this exhibition. There were the polaroids - some of them small, in monochrome, mounted on large blank areas, so one had the feeling of prying at them through a small window; others where a figure was presented dismembered in four separate shots, partially resituated in juxtaposition, lit by the putrescent purple-pink and green colours of that particular kind of polaroid. By the simple device of mounting up the separate shots in this way Johns achieves the disturbing effect of a slowly-dawning shift of simultaneity - or, by imperfect overlap in one figure, the apparition of an extra leg. 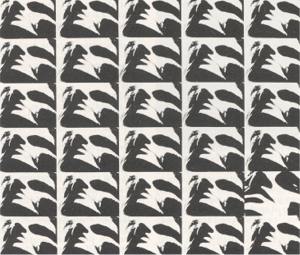 Again, he plays around with time in montages where he has placed side by side the same split-second frame from motion photography film - as in Head in the Light, a kind of multiple self-portrait made from a foreshortened shot of his face, with just one variation of a closer viewpoint. Similarly, in the montage where a figure points again and again throughout the grid, some of the smaller interspersed and tilted frames are replaced by quite new images that one had not immediately noticed.

So far as the atmosphere in these works is concerned, you don't have to seek far to scent the influence of Andy Warhol; and I also noticed, from some tags and titles, the spectre of Lou Reed hovering in the background. These are clues as to the aesthetic of Johns' work.

Whatever the fons et origo of the whole thing these works had an audacity, an assurance and coolness about them that was all of a piece and seemed to indicate interesting things yet to come from this artist. Paul Johns intends to be working more in cinema this year.