GILLIAN CHAPLIN In Search of a Gazebo

In the hands of a sensitive and honest person, there is no doubt that the camera can reveal, often without the photographer really being aware it is doing so, the inner concerns and sensitivities of that person. Certainly one can catch a very real glimpse of the way the mind works. I feel that in her recent exhibition Gillian Chaplin has revealed much about herself that has previously been hidden.

Her 1976 show at Snaps largely featured colour aerial landscapes, essentially abstractions that remained at a distance from the viewer. Not so these new pictures, almost all taken over the six months prior to the show. Again, a few similar landscapes, but the best of them were smaller, more precise and very neat. A series of self-portraits, done as an attempt to break through personal barriers were very direct, very central, and very sensuous in the best sense of the word.

For me though, the best images in the show were those colour and black and white images made with a cheap plastic Diana children's camera. It could be a bit passé using a Diana these days, with Peter Peryer, Nancy Rexroth et al on the scene, but with these images - not at all. The colour ones, largely taken at night with a flash, are superb. Beautiful trees, flowers, garden statuary. . . The black and whites share a kind of evocative childhood intimacy that is quite haunting. A glimpse of a child in a pushchair, a sea of clover, an expanse of lawn leading up to an old house. . . 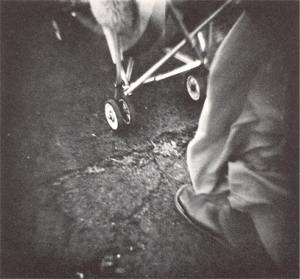 GILLIAN CHAPLIN
Child in a Push-chair 1977

Some other images in the show, photographs of friends and places, are a little more conventional and consequently do little more than show something of the world in which Gillian lives. Every show I've seen by a woman photographer - with the exception of Diane Arbus - contains a few images of lady friends. Perhaps it indicates something of the nature of friendships formed by women. Of the fifty-five images in the show, thirty-four sold at prices ranging from $18 to $34.

Max and Simone Oettli sent to Snaps Gallery a bundle of images taken over the past two years on their travels back to Europe through Asia and Russia. Gillian Chaplin mounted and framed the show, which fills both floors of the gallery.

Both Max and Simone work in the manner of the traditional photojournalist in the time-honoured Life tradition. In fact, I feel that their work can now be generally considered together, as both display the same warmth, life and humour. It was interesting going back to the stock bin at the gallery to dig out some of Max's early photographs, as the same concerns are evident.

Max Oettli, perhaps more than any other of the current generation of New Zealand photographers,has been working in a consistent yet developing style for a number of years. I remember some earlier work of Simone's as being much more reliant upon strong compositional elements which tended to slow the work up, than that exhibited now. These images have a much looser, more spontaneous feel about them.

Most of the prints in the show are big; all are clean and printed free of 'emphasis'. The over-riding impression one gets from the show is one of abundant life. Even images taken in that doyen of greyness, the USSR, exude a vitality and humanity that seems sadly lacking in this country. Where is the life in our streets? One good sign, though - driving home after looking at the show I saw in big red spray can letters a metre high on a wall in Ponsonby Road CAULIFLOWER EARS. . .

Charcuterie is a small, casual French restaurant in Auckland's Lorne Street run by Roger Roelants. For the past few months he has been pursuing a policy of hanging photographic exhibitions on the walls around the restaurant, and even advertising in such terms as 'Great Food, Great Photography'. Roger himself is not a photographer (confesses to using 'only an Instamatic'), but for whatever reason has decided to adopt this as a definite policy. Photographers can exhibit there free of charge, and no commission is taken on print sales made during the shows, which generally run one month. The only stipulation is that the photographer must have an opening, on the first Monday evening of the show. 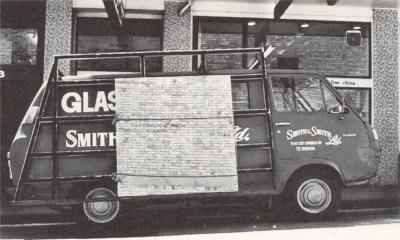 Exhibitors to date include Phillipa Karn, an Elam student who makes rather intense little images of plants and things in both black and white and colour. Her photographs have a kind of lushness about them which is good to see. At the time of writing the current exhibition features Alan Moult and the Zoom collection. Alan Moultis an Australian, currently residing in New Zealand and is publisher/editor of Zoom magazine, a bimonthly broad based magazine primarily aimed at the hobbyist photographer. His own photographs are mostly of friends (Polaroids - SX70's) which tend to be rather disappointing in that they lack anything which takes them out of the realm of Joe Bloggs' album snaps, and a series of black and white prints made in the tradition of the photojournalist. Some of these are rather good.

The Zoom collection is a mixed bag of images by Australian, French, and New Zealand photographers. Actually, this is largely an assumption based on the names of the photographers: Carol Jerrams, Graham Kirk, Melanie Le Guay, John Thornton, Francois Lany, Pierre Cardien, Bonny Lategan, Trevern Davies, George Schwarz, Phillipa Karn, George Gittoes and Peter Peryer. With the exception of work by Kirk, Karn, Peryer, and Jerrams, most of the other work tended to have rather a slick, glossy, advertising kind of feel, with the emphasis on stylistics rather than feeling. Plenty of colour and zippy technique, but I personally do not have much time for this type of image. Of the others, the usual Kirk quirks of social/environmental just a position made him stand out as being the one photographer represented in this part of the show to be demonstrably sure of a personal direction.

It is really good seeing a restaurant such as Charcuterie making good space available for the exhibiting of art-works. The food's nice too.