Auckland
The Aesthetics of an Urban Environment

On occasion, Auckland has been referred to as the most beautiful city in the world. Some sensitive locals know that such statements must come from polite foreign visitors. No non-Auckland New Zealander would commit or admit such a folly. On the other hand, they could come from locals who have never been anywhere else - or of course from the Mayor. 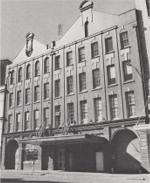 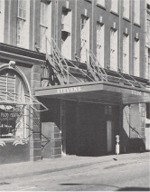 These buildings reflect the forms not of a New Zealand city but of other times and other places... ... canopies or verandahs were tacked on...

Apart from the obvious practical advantages, like shelter and a deep-water port, it must have been all this beauty that impressed itself so deeply on the minds of those who chose the site for what has now become New Zealand's primate city: a city that is prime in the sense of being our largest metropolitan complex. But what about the city itself - not the setting to but the accumulation of structures that the people have set down or put up (it seems) all over the place?

It may well be true that it is not the arrival but the journey that is important. But when in human terms the journey is infinite, the people of a city should express some interest in and concern about the vehicle in which they travel.

... the city assumes a view similar to that in any subway ...

The relationship between the traveller and the vehicle is a complex one. At one and the same time, the city reflects our attitudes to it and shapes our attitudes to it and to other cities. Sydney is more lively; Rome more beautiful; London more entertaining. It seems that all too often the criticism is by way of odious comparison as the Godzone wits return from their seasonal migrations.

What does this prime city show us, and others, about ourselves. It seems we sit uncomfortably in a city from another age and another place. We put material needs like comfort and profit above the aesthetic. We operate laudibly high standards of public safety at the expense of our architectural heritage. We have no regard for the integrity of spaces - which we also seem to fear and thus clutter with minutiae: with aspidistras and expensive ornaments like a Victorian drawing room - often defeating the very purpose of the space. If all that is not enough, we seem incapable of seeing it all go on around us. We continue to ignore the example that could be drawn from the city if only we cared to look. Primate or not, Auckland may not yet be very high up the evolutionary tree.

Around the centre of this essentially Victorian city is a complex collection of buildings. These buildings reflect the forms not of a New Zealand city but of other times and other places. Because of this we have had to change them from their original form to fit the needs of this place. Attempts have been made to adapt the exteriors to the real, or at least felt, needs that climate or comfort demand. 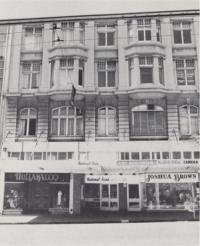 ... an evolution in retail styles and needs ...

It seems that from quite early in the life of these buildings, canopies or verandahs (a domestic description which may be indicative of yet another attitude expressed in the centres of our cities) were tacked on. It was some sort of response to conditions of sun and rain that were quite different from those in the countries of origin of the building-style itself.

In most streets this became at first the norm and then a rule. So the once great potential for vistas and the sheer enjoyment of buildings afforded by the generous street-widths rapidly became diminished, and in the severest case of Queen Street removed altogether.

From the footpath, the city assumes a view similar to that in any subway: when empty, stark and relieved only by the ingenuity of individual shopkeepers; when full, crowded and constraining. It is questionably good for business to have the highest pedestrian flows in the country tunnelled past the doors of each inviting emporium: but what effect does this cattle-race have on the spirits and the visual education of the population? Shop windows are a poor substitute for the architecture of a city. 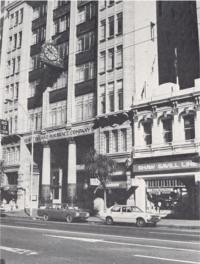 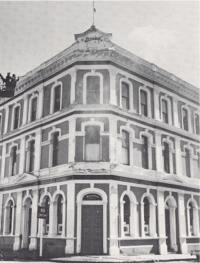 ... a few of the earlier buildings retain their intended impact ...

Almost as an exception now, a few of the earlier buildings retain their intended impact. However, this is only if they can be glimpsed from other gaps in the blinkering verandahs. Too much of this sort of thing and we will have wet customers, sun-damaged goods, and pedestrians' bolting in the streets at the unexpected view of a complete building!

Other unfortunate visual effects are the truncation of the tops of all buildings over about four storeys: except of course when one is crossing the road - and who looks up then when all the generous spaces have been given up to vehicles?

At the same time, an evolution in retail styles and needs has totally dissociated the building above the verandah from the activities below: a sort of above and below stairs split in the personality of a city which may have a far more wide reaching effect than one might think on any feelings of rightness about the place when thought of as a whole. 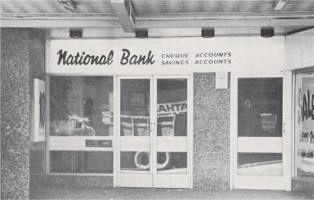 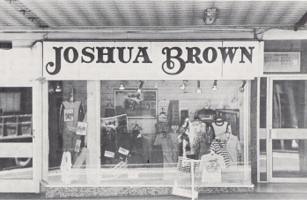 ... has totally dissociated the building above the verandah from the activities below ...

Clearly we have come a long way from the situation of a building like the Alexandra Hotel, which is still able to be cleaned down on a quiet Sunday morning to what it once was. It survives intact because it lies away from the mainstream of commerce, in an area where non-existent crowds and narrow footpaths allow the building some dignity of age.

Generous as the early planners were with street space, Auckland missed out on early-established public squares. Where they have been recently created it seems that we have not learned from one hundred-and-forty years of experience that the sun shines from the north in this part of the world. 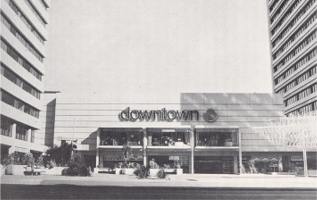 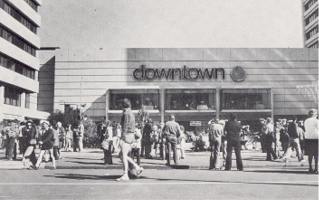 ... by ten in the morning shadows creep across ...

Queen Elizabeth Square at the bottom of Queen Street on a spring day is sunny only in the early morning. By ten in the morning the shadows creep across. By midday the whole space is bathed in shadow.

Perhaps to make it look not quite so empty, perhaps to express a dominant materialism in our culture, this square is cluttered with large and small contrivances. They may be intended just to screen and distract from the buildings: but on those occasions when crowds do come to the square they are walked over, stood on, and ignored, as the people attempt to use the space for what it could be - a place of public assembly. 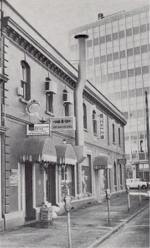 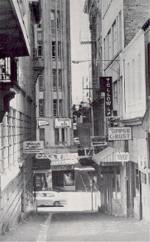 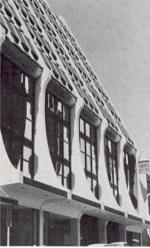 ... the freedom with which things are hung on the faces of our limited architectural heritage ...

Smaller spaces like St. Patrick's Square are being used to advantage to create a context for particular buildings. It does not matter if they are incidentally filled with small-scale things.

What the large spaces do tell us is that we have yet to learn how to feel comfortable in spacious cities without letting a fear of scale and emptiness prevent an evolution of suitable forms around the spaces created. The proposed Civic Square in Auckland will create a vast urban space. What we do with it, and around it, will tell later generations much about ourselves that we may not yet be able to see.

Some of the earliest spaces in Auckland were in the form of parks, which now provide a pleasant relief from the growing network of pedestrian tunnels along the side of streets with heavy traffic. But even here the privacy and tranquillity is disappearing as towers rise to heights never imagined a hundred years ago and peer into the privacy of our public gardens. 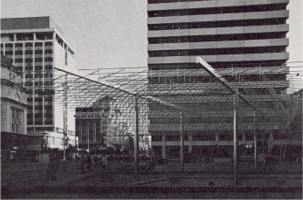 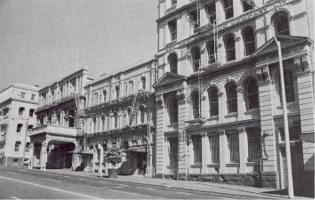 One of the few symbolic gestures of urban design to be found in the city, the location of the Auckland University tower along the axis of Victoria Street, could now pass unnoticed, diminished as it is by the growing city.

The absence of a conscious concern for the city is most readily seen in the freedom with which things are hung on the faces of our limited architectural heritage. The buildings themselves are lost in a montage of individual taste and practicality which cannot help but draw our attention to the ingenuity of metalworkers, awning-makers, sign-writers and air-conditioners.

Some of the latest additions satisfy the sense of suitability of successive owners: but they ignore the fact that the original designers of the buildings - both the very old and the very new - set out to achieve results that satisfy their own and the community's aesthetic senses. Many people may wish to alter conventional 'works of art': but few if any would have the courage even with ones they themselves own. It seems, therefore, that as a community we do not see the city and its buildings as a grand work of art. Occasional pieces may be appreciated as individual items: but their protection and preservation is rare, and almost always difficult. 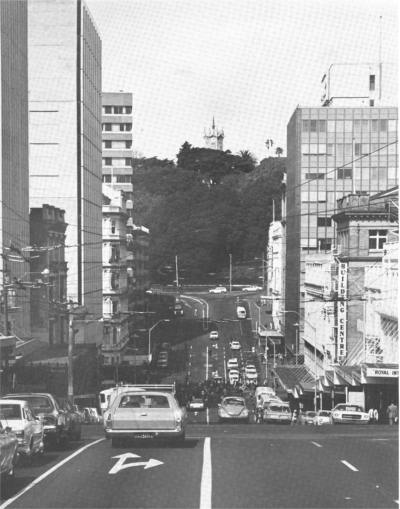 .. one of the few symbolic gestures of urban design ...

And so, it seems, the centre of Auckland must be seen as a great piece of folk art. Viewed with a more analytic eye, the city says a great deal about the collective character of Auckland. If we don't like what we see, we will have to change ourselves as well as the city. Such an evolutionary process may eventually produce a city which does a once magnificent site justice.