Terry Stringer combines the professional attitudes of the serious artist (and the artist's imagination and insights) with the social commentary that more commonly is accepted as the province of the sociologist. He seems aware of the disposable elements in late twentieth century Western culture - the ephemeral nature of the consumer society with its goods, services, interests, aspirations and values.

The critic may ask why an artist working in a three-dimensional mode should go to the extreme of giving his work a two-dimensional quality? Why does he take something that can be viewed in the round, and purposely impart to it the flatness, the sharp edges one would normally expect to find in the outlines of the illustrations customarily found in mass-circulation magazines like Vogue, Time, Newsweek and Playboy?

The fact is that most people learn about sculpture through its two-dimensional representation in magazines. This being the principal means of its mass presentation it is logical for an artist to present his work in terms appropriate to the media through which it is generally distributed. If this is Stringer's intention he has succeeded very well. Mother as a Girl (essentially a painting on board), and Reclining Figure, are both the quintessence of such an approach. They have the magnetic attraction of the mass medium on which they are based. They could be cut-outs from the popular magazines; and yet they are as distinct in their own way as the genre from which Robin White's work is derived. And the subtle employment of colour reinforces that distinction. 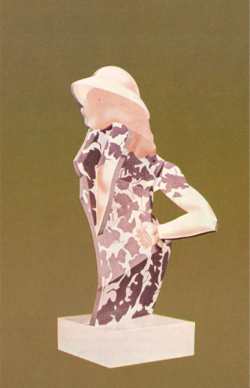 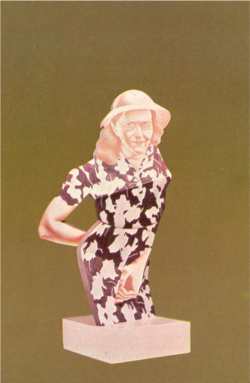 Stringer is obviously still tentative in his approach. He is plainly aware that total commitment to the one mode can impose restraints which might prove embarrassing to him in the future. Furthermore, he is aware of the artist's need to explore fully the total range of such a technique. Perhaps for these reasons his sculpture extends through the gamut of the almost purely two-dimensional to the near three-dimensional as typified by his Vogue Woman an impressive work reflecting its classical origins while comfortably conforming to the 'flattened' technique characteristic of the exhibition as a whole.

But perhaps it is the piece called Dramatic Gesture that presents the most effective and vital combination of the Stringer techniques. The two and three-dimensional elements are happily combined with mechanically hinged arms that can be moved and that give a variety of impression/mood/ feeling. The piece has a Medusa like quality, a suggestion of the softly feminine, of high spirits, and of something more dangerous - La Belle Dame Sans Merci: the whole range of what is inherently 'woman' and which combines sexuality with practicality. There is something playful about the work too - a suggestion that if it were suddenly to assume flesh and bone the woman-in-the-flesh would have a capacity for laughter.

Not every piece of sculpture in the Stringer collection conforms to his exploitation of the two dimensional. Naked Puppet carries suggestions of some South East Asian wood carving. And his Schoolgirl (almost completely in the round) possesses an appealing gawkishness that can be modified by changing the position of the legs. In their very different ways, both pieces make successful sculpture.

The same is not so easily said of one or two of the other exhibits. Book Woman, a rather unattractive combination of flat surfaces and hinges (clever though it may be in concept), has a jig-saw quality that distracts from what the artist is saying. But this piece is more than compensated for by the undoubted success of Armed Man - an exciting combination of unexpected and contrasting planes, coupled with a brilliantly humorous use of colour. This is a wry, political piece that can be taken as serious comment on the 'seventies and/or as a jest against our social pretensions.

The paintings/drawings shown represent two distinctive styles. The first reflects something of the qualities found in the sculpture a sense of surfaces, planar dimensions which are pleasingly married in Madonna in a Box. Icon Woman links something of the latter's mood with the two-dimensional aspects of the sculpture, yet has a hint of the primitive, and of naivety about it.

The Dam Sequence (which I take to be a slightly earlier work than the bulk of the pieces shown) is a triptych that can be accommodated to four distinct visual presentations. It is one of the few landscapes in the exhibition and succeeds in being impressionistic and at the same time genuinely reflective of the New Zealand countryside and social climate. This scene is repeated in a (still earlier) watercolour - pleasing in itself, but not quite possessed of an equal vitality.

Stringer's recent (1977) watercolour drawings contrast sharply with the rest of his work displayed here. In the main, they are delicately delineated through the use of soft and complementary colour: yet they are capable of reflecting the muscular strength of his models in a most pleasing way. In spite of the brush technique employed, the bones and spines of his subjects give a convincing impression of sharpness which contrasts effectively with buttocks and thighs.

Overall, the Elva Bett exhibition demonstrates three different techniques in the Stringer repertoire; and demonstrates that he is at one and the same time able to produce work of marked originality and to make convincing and meaningful social statements. Stylistically there is a discernible linkage with the atmosphere of the 'twenties and the 'thirties - a linkage which is no doubt intentional and which adds a dimension likely to assist in giving permanence to much of what he is doing.