To qualify as a Young Contemporary you had to be under thirty-one - a number which until now I didn't realise had such magical significance. There were about seventy artists, represented by one work apiece, gathered together under this umbrella (I bet some were over thirty-one, the sneaky devils). So we, the public, were confronted by this incredible mix - painting and sculpture of all sorts, video work, a dyed plastic and muslin tunnel environment, artists well known, little known, and unknown. It was pretty much a lucky dip. There was some terrible stuff. I won't name names. I've no wish to insult anyone. There was a lot of middling work; and a few strong pieces which tended to suffer from the company they had to keep. The weak work dragged the whole show down, while I would've liked to have seen more of some people's work. That's the trouble with this sort of exhibition with such an obscure unifying principle. After all some people are old at twenty, others young at fifty. So what possible benefits do such shows confer on anyone - artists or audience? It does give opportunities for exhibition in a prominent place to young artists who mightn't otherwise get the chance - though premature public exposure can be disastrous. A wide reaching exhibition like this may give us an illuminating view of what's going on in the art world - then again it mightn't.

What is going on according to this show? People still paint figurative pictures. There was, for instance, Peter Worrall's sub-Symbolist Death of Love, featuring a heron, a window with stained glass and a view through to mountains, and a naked girl in the foreground doing her Ophelia bit, face down in water, surrounded by a leafy glade. Nigel Brown's expressionist Lemon Tree Painting No.3 spoke of tenuous survival and bitter fruit amidst intimations of death. Grahame Sydney's Jockey Club had another decrepit building in a dry bare landscape without green - I guess that corresponds to some sort of emotion. Glenda Randerson gave us Reflections in a Victorian Dresser - meticulously painted - like Neil Driver's Vacant Room of similar vintage if the fireplace was anything to go by. And with people as subject-matter, Jeffrey Harris's Maternity. 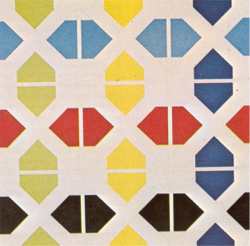 There were one or two landscapes - even echoes of Woollaston in Richard McWhannel's Neudorf (Upper Moutere). All this was in one room. You had to go into another for most of the non-figurative and abstract painting, of which, predictably enough, Ian Scott, Alan Maddox, Robert McLeod, Rick Killeen and Tony Lane stood out way above the others. But why include Killeen's Frogshooter, by now very well known after the Benson and Hedges award and lengthy hanging in the Auckland City Art Gallery? Why not something we hadn't seen? McLeod's huge Lots of Little Landscapes and Maddox's Work This Out Jungle Boy (subversive and intoxicated grid and crosses) - both very lively, wry paintings - were familiar too. But Ian Scott's Lattice, also grid and diagonals but geometricised and severe, was a first in a public show - the best work he's done I think. Tony Lane's unstretched Night with Day, blotches, stains, swathes of colour, red dominant, was a vigorous and authoritative work. I'd like to see more.

What about sculpture? It ranged from Terry Stringer's acrylic on wood, Mother as a Girl to Marte Szirmay's carved metal abstraction Untitled to Martin Mendelsberg's Fibonacci Series of fluorescent tubes and echoes of Dan Flavin. Christine Hellyar's Supplejack Tangle had the strongest presence - an entanglement of thin latex tubes and cords suspended from the ceiling - fetishistic, animistic. 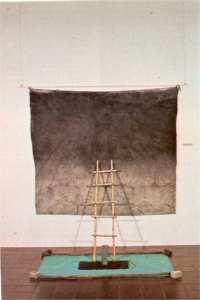 And of the rest? Denys Watkins continued his ironic and strangely ritualistic way with Star Map which included one increasingly black unstretched canvas with tiny red and yellow blobs on the wall, a bamboo ladder connecting this to the floor and a rock and string arrangement - some miniature Stonehenge. It was a quietly resonant work. Nicholas Spill presented Developing a Participatory Situation - perhaps that's what the exhibition was meant to be all about. This was a box about the size of a telephone box into which we were invited to read and do something which was recorded on video. When I came along it was being removed - though I did espy some nasty adolescent graffiti which modesty prevents me from describing. Obviously someone was hoist by their own petard.