The commodities of the human spirit

The artist is trapped in his medium at present, trapped into painting pictures for commercial consumption. But, as far as I'm concerned, the artist's place is to take part in society. He's been shut out of this social function by being pushed into his role as an 'artist'. There's no reason at all why he shouldn't be employed - by a city, for instance - to take part in the creation of things that happen there both as adviser and worker in some cases. The idea of art being something that's shut up in an art gallery, that you go out and see once in a while, is very close to the conventional idea of religion - you go once a week to mass or whatever it is, and the rest of the week you do what you like. Art's got into that sort of situation, with pictures and galleries and the whole scene. The realisation that you can't separate it out is something I've had ever since I started to function as an artist. I couldn't mow a lawn or make a pile of wood without thinking about how it was going to look, how it would function.

This trip that I took to Japan reinforced this attitude in me. While I was there, I felt as if I'd always belonged. I understood what I was walking through. Things that should have been gigantic shocks to my system I accepted very easily. I discovered this affinity for Asian things by listening to Asian music. Their tone-scale system is quite different from ours, yet, even as a child, it never struck me as anything unusual. This has had an effect on my composition, for instance, in that I never write in keys. I was always trying to find strange sonorities from the very first. Where this affinity comes from, I don't know. I'd often been stunned by the number of musicians who have no feeling for art, no understanding of it. That's always been a source of mystery to me. But then I began to be aware of the academics of music... it explains why this art has gone into one sort of slot.

I think artists almost always side with environmentalists when there's a battle at hand because, generally, they're real people. I have this theory about art that it's really an extension of a very primitive feeling the hunter had. The hunter was a special person in his tribe. It wasn't just a matter of going out and killing animals, it was one of knowing all there was to know about a particular environment and place, the animals' habits. A hunter today goes into a shop, buys a rifle, then goes out and shoots a couple of pigs on a weekend. He's not a real hunter. The artist today is like a real hunter - except that he's put aside the aggression part of it. He doesn't actually kill anything - or he shouldn't. You could say that the artist is the first evidence of another type of human being. He's an evolution of a type of man that didn't exist before, the carrier of a genetic trait that was attached to the hunter in times past. He tends to be a person who will stand up and start yelling, an early warning system. He sees something disappearing that he knows is. irreplaceable. This whole idea of the artist being a mad individual is crazy - he is part of a large organism, one of the chromosomes in the genetic structure of the human race that keeps it on its track. He used to be the hunter, when it was necessary to be the hunter: now, he's the artist. 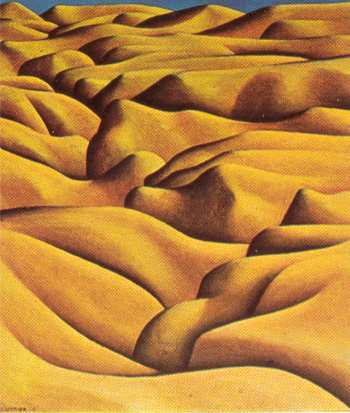 I've also been coming to the feeling that the earth has the ability to recover, and that human beings can't really do any long-term damage to the planet. We seem much more likely to damage ourselves, not the planet. Even in the use of nuclear power the fear seems to be for ourselves, not for the Earth. Past civilisations feared the planet - they couldn't chop a tree down without going through a ritual with the gods. They'd go out into the forest and sit round a tree, weep for it and give it a good funeral before even laying an axe to it. They knew they were in danger of upsetting a balance by even touching that tree. It wasn't just a piece of wood to them, it was an important living organism. But humans now have come to see it the other way around. We think we're more important than the Earth - and I don't know whether that's a good thing or not.

On the question of whether I paint consciously to make a record of landscape that is disappearing: at present realist painting has got to a state of recording. In most cases the artists who are painting these things are very conscious that their subjects are in line for destruction. It's quite the opposite of what was happening in the arts fifty years ago, when the interest was in those wonderful things called machines. Even when I was an art student the teaching was concerned with how to paint factories. I can remember them saying: 'That's real art, boy, you paint that, that's exciting!' Anybody who got mooney-eyed about a river running through some trees was a real outcast. I suffered from that type of thing right through my career until quite recently, because that's just the kind of thing I wanted to look at. I didn't want to look at bloody machines and houses and things, I really wanted to look at the beautiful things of life (although some old machines can be really beautiful).

One nice thing that is happening... the farmers in Canterbury are starting to make something like earth sculptures. Every time they plough, they turn up polished rocks from the fields and throw them in piles. Then they form them into shapes with their backs to the wind for the sheep to shelter under. There's something almost religious about it. I think a lot of the early things that we've come to regard as religious, like votives for example, are really like those piles of stones. They were things that were done as a matter of course, without any intention of mysticism at all. I'd much rather hire myself out to make stone walls than to paint another oil painting. But there's nobody around now to finance a stone wall.

We're very worried about nuclear power, but it is only the development from another sort of power. When the other power runs out, nuclear power has nothing to service. A whole society built on oil can't suddenly switch to nuclear power because there's a whole new set of physics involved. We talk about stone-age man, iron-age man, copper-age man. This has been oil-age man. Every section of industry today - plastics, steel, anything that requires energy to be made - is powered by oil. When that stops the whole structure has to change: and that is going to be a hell of an interesting period to live through. We'll see this thing happen!

I've looked at flowers and I've seen how a flower orientates its petals - its solar collectors - I read somewhere that each cell is like a photographic lens that concentrates the light, so I made a drawing of a sunflower sort of thing which is a collection of solar panels and in the centre of each one is a lens that collects light and sends it in to a heating bar which expands and stops the movement of an axel through it. And when the sun passes across the sky a bit further it picks up another set of panels, the bar cools and allows the whole thing to turn a bit further. This keeps on happening with each solar panel, which is like a fly's eye with hundreds of lenses. To me, that's as exciting as art. They're fun to play with.

What it boils down to is that art and conservation are synonymous, in that they're after the same thing - survival. That's what drives human beings and always will. And in beauty is the only way to survive.

Even if our civilisation is turned to ashes, all the genesis of creation is here and, unless we blow this earth to pieces in a giant nuclear explosion, we can't really change the situation. It'll come back.