When I was first shown by Mr Colin Dobson the inside cover of a 1920 edition of Ruskin's Essays and Belles Lettres, signed in black ink by Charles Frederick Goldie and dated 1933, I expressed a merely polite interest. Scattered throughout the book, however, were 218 tremulous signatures, which seemed the practice attempts of an idle or earnest forger. There the matter would have rested: but some months later an antique dealer, Mr Borg Johansson told Mr Dobson that there are similar signatures throughout other of Goldie's books and possessions. Independent sources have since confirmed Mr Johansson's information.

Two questions arose. Why should the aging Goldie sign these pages? And is there a hidden logic to the actual placing of the signatures (are they, for instance, beside those passages he most approved) or is this curious form of annotation a purely random one?

The latter question is most easily answered. The placing of Goldie's signatures appears to be determined only by the available space: they seldom cross the printed words or illustrations, but are penned in the empty spaces of margins, paragraph indentations and divisions, or in the blank frames to figures and headings. The first question - why should Goldie sign these pages? - is a more difficult one. 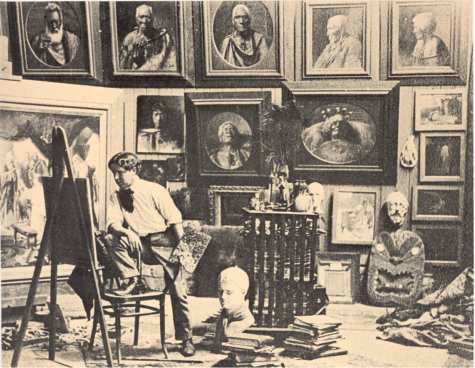 The younger Goldie in his studio with assorted wares
(Photograph: The Bond Collection)

Since Goldie's personal papers in the Auckland Institute and Museum cannot be released until his widow's death, it might seem we can only conjecture at the thoughts of this painter, born in 1878, trained in the nineteenth century academic system, and living and dying in an artistically conservative country.

As he signed and re-signed the pages of Ruskin, Victorian sage and propagandist of verisimilitude, did Goldie remember him too as the castigator of the modernism that was 'flinging a paint pot in the public's face'? Certainly, Goldie's own attacks on 'modernism' parallel Ruskin's maledictions on Whistler's aesthetic.

Ruskin and Goldie, like many nineteenth century critics, thought a picture's value related in part to the amount of labour put into it. (For this reason Ruskin admired men like Samuel Prout and Lewis, those painstaking pencillers of nineteenth century travelogues.) In an Oxford lecture of 1873 Ruskin called a Whistler painting 'absolute rubbish, which had taken about a quarter of an hour to scrawl or daub - it had no pretence to be called painting'. Then in 1877 Ruskin wrote of Whistler's 'ill-educated conceit...' Similarly, in his New Zealand Herald article of 1934, Modernism Condemned, Goldie approvingly cites Michard as saying of Impressionism: 'An art which has neither draughtsmanship nor execution is too easy to imitate. An amateur could learn to do that in eight days'.

Also parallel to Ruskin is Goldie's further quote from Lecompte de Nouy: 'We cannot, we who have worked so hard and are still studying, approve of a tendency which is characterised by the absence of study'. Furthermore, Goldie underlined a passage in Ruskin's Essays and Belles Lettres which contrasted the 'enormous cost of care and labour' demanded by Pre-Raphaelitism 'in contradistinction to the present slovenly and imperfect style'.

Evidently, both Goldie and Ruskin despised painterly modernism. Their affinities are perhaps deeper than this shared aversion. Both men were intellectually formed in the nineteenth century; both suffered mental breakdowns; both may have feared new developments in art and society as a threat to their aesthetic. It may be significant in this regard that Goldie marked the following passage in Ruskin's Essays and Belles Lettres:
Indeed it is useful when the young usurp the place, or despise the wisdom of the aged; and among the many dark signs of these times, the disobedience and insolence of youth are amongst the darkest.

Whistler could not have divined that the aims of Impressionism - to capture in paint the discarnate iridescence of the visible world  - might lead art into absolute abstraction; yet his use of musical titles implies a self-contained art. Had not Pater written that 'all arts constantly aspire to the condition of music'? Ruskin feared just this - the amorality of an autonomous art.

Goldie's lesser intelligence, with the advantage of hindsight, sensed in Impressionism the beginning of a new abstract art that was his 'real' contemporary. In his Modernism Condemned he called the Impressionists 'such as Manet, Monet, Renoir and Pissarro...the early and less mad modernists'.

Ruskin died in 1900. It was Goldie's misfortune to live on into a century whose art (and perhaps whose morals) he despised. Whilst in Europe and Russia abstraction had destroyed the last vestiges of Renaissance illusionism, in New Zealand (as if to prove that time is relative, that to be contemporaneous is not to be contemporary) Goldie was living and dying in a nineteenth century dream. His nightmare was perhaps the triumph of modernism. It may be that Goldie, an old man in a century whose art he no longer understood, was, in his compulsive signing and re-signing of Ruskin's pages and in his marking of the passages he most approved, trying to assert the continuing reality of his nineteenth century vision.

Since Francis Pound wrote his article, the death of Mrs Goldie in Australia has now released various scrap-books, photographs, and other items held by the Auckland Institute and Museum library.