Princes And Artists: Patronage And Ideology At Four Habsburg Courts, 1517-1633 by Hugh Trevor-Roper
published by Thames and Hudson

Princes and Artists represents the pros and cons of the patronage and ideology at four Habsburg Courts, from 1517 to 1633, written in a precise, to-the-point, scholarly manner. Its author, Hugh Trevor-Roper, convincingly argues several points of contention about the Habsburg patronage of art as seen through the reigns of Charles V and his son Philip II (of sixteenth century Spain) to Emperor Rudolph II (Prague) and the Archdukes, rulers of the southern Netherlands in the late sixteenth and early seventeenth centuries. 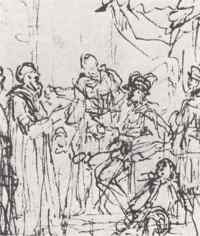 Titian being presented to Charles V, Bologne, 1531
ink-drawing attributed to Titian himself

Hugh Trevor-Roper sums up well his hypothesis 'that art symbolised a whole view of life, of which politics were a part, and which the Court had a duty to advertise and sustain', The treatment of classical humanism in the fifteenth century is contrasted with the sixteenth century secular humanism of the northern Renaissance.

The author also convincingly illustrates the crisis of society - for example, the political weakness and ideology propoganda of the Catholic counter-reformation.

With its 123 well-designed illustrations, Princes and Artists is written in a narrative-popular style, which is yet scholarly in its treatment of sixteenth century humanism, its failings and its reaction to the counter-reformation.