Roy Dalgarno's painting is an interpretation of man: man as a new possibility in the post-war world. His humanism, one feels, is very much that which emerged from the ashes, the bone and the fire of the last war. It is a humanism which is embodied in the ideals of the United Nations, in the hopes for a humanised social environment.

Naturally, like all such visions, this one has gathered its share of tarnish: hopes have gone sour, institutions have become bound up in political triviality, ideals of reconstruction have backfired. But the vision itself is a good one - and it was desperately needed as a counter-statement to the twisted girders of Hiroshima.

The artist has called his exhibition Universal Man. That title reveals both the strength and weakness of his work. 'Universal Man' is a daunting subject for any who wish to explore the depths and contradictions of man in the large. Dalgarno has certainly placed before us images of this universal man, but he has not told us much about men (or women) in particular. His portrayals lack 'character' in the deeper meaning of the term. His figures are generalised to the point where they lack specific identity. This is particularly the case with the paintings, where a basic human form or 'element' is present which finally metamorphoses into a very abstract total 'Manscape' in two of the pieces. The enigma of individual personality is seldom revealed: the lithographs of the Frightened Girl and the Girl Thinking being exceptions on this score.

I believe it is an important artistic problem: this one of how the painter reflects the 'universal' in man. The process of portrayal, when it has worked best, has often started with the particular, (a person), and revealed the lineaments of the universal through this. Mr Dalgarno has done the opposite. He has painted out a universal idea of man. The result has been an element of anonymity and abstractness in his figures. They remain figures rather than people: an historical phenomenon called 'Universal Man'.

In one sense, this is true to our age. The lessening of personality is our much-discussed condition, and it's perfectly natural for depersonalised visions of modern man to find their way into the imagery of the contemporary artist. But it is somehow unsatisfying, this universal figure without particular characteristics. In this exhibition one feels it as a limitation something even that has obscured the truly 'universal'. The same could be said for the immense succession of figurative paintings done by the mature Picasso. They are forms rather than persons; for the figurative painter. 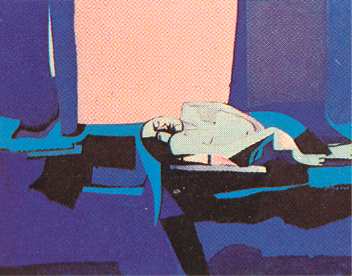 The paintings, which are the major part of the show, were the least satisfying pieces for me. They had plenty of strong colour: something of the shattered geological feeling of Australia with its ageing strata and chromatic colourings. The human figures are hewn out of this backdrop, and are even monumental in scope. But at the same time, they are curiously lacking in presence. One or two have a power and emotion about them that offsets this rather amorphous feeling: for instance, the poignant Sleeper at Dawn. For the most part though, these works, while they break up traditional elements in figurative work, do so without revealing significant new patterns innate in the subject. I found the lithographs most satisfying. The artist's strength of line, his sense of the contrasts of light and darkness, his sense of form, all show at their best here. That he can truly compose a piece is shown by the lithograph of the Fishermen at Sete.

The drawings included three strongly-outlined, strongly-composed pieces: a series about a child. These were the most original works in the exhibition. They were impeccable, curiously dispassionate studies of the moments of early childhood, emanating a feeling I have not known in any other work with this subject. For the rest, the drawings had the same rather anonymous quality of the figures in the painting.

Overall, Universal Man was an uneven exhibition. Roy Dalgarno has an admirable theme, but he has not developed imagery of sufficient power, precision and magnitude to fully reveal the range of his subject. He certainly is to be respected for having a subject at a time when art is trying to eschew them, but his work has not reached the bedrock of the human personality.