ALLEN MADDOX Paintings
I first encountered a single painting by Allen Maddox at the Benson and Hedges early this year: unstretched canvas unprimed, symmetrical criss-cross arrangement, loose brushing, coloured stroke over coloured stroke, visible emendations, something obviously powerful, and distinct from the geometrical orderliness of abstract hard-edge, hard-edge figuration, and the egoist ramblings of fantasists (usually & absurdly called in New Zealand surrealists). The exhibition at Peter Webb's was the first chance in Auckland to check Allen Maddox carefully: he has shown in Wellington, Christchurch, Palmerston North and Wanganui.

What holds the attention in to his pictures is the simple grid of squares, bent though they are by the handling, by the curling canvases, by the curving of the X's that fill them, by their irregularity of size and shape. There's an expectation of pattern in the grid, further hinted at in colours that appear and reappear. He avoids in fact symmetries and patterned repetitions. Much of the painting and overpainting in the early canvases of this year obliterate possible cues to reading too certainly an order. You're held by the search for pattern, but you're left with nothing but the singularity of each X. These X's are usually made of at least two diagonal ribbons of different colours overlapping one another. In some place the diagonals are linked to the grid the same colour continues from one to the other, so that the frame and its contents are interwoven. Every square is different from every other, usually, and carefully so. Every moment of activity on the canvas is unique and appears as such. 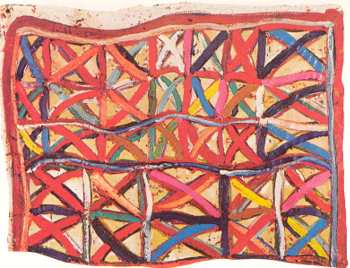 Nothing is planned in advance except the grid and there can be few simpler ways to begin. Each new stroke grows out from the strokes that precede it. And because pattern is to be avoided, each stroke has to be a new invention of colour, brush-style, curvature, length, manner of overlap. What is apparent is that Maddox has a vast field of possibilities opening up before him as he works the canvas, at every stroke: a situation which very few New Zealand painters have been willing to endure or are prepared to cope with. His preparation for this processual method can only come from continual practice, not sketching but active engagement with painting and an accumulation of experience of the means he is involved with. What is not allowed is a relaxation into the execution, tediously, of a predetermined form.

He begins with a thin painting of the grid and X's, works towards a denser paint, leaving the colour of earlier strokes showing at the edges of the new one. In the earlier canvases of this year, he covers up his first shots, or his second or third, builds towards clearer big divisions of the canvas by partly framing off several squares by big L's of one colour, seems to aim at some kind of geometrical balance, something that could be read as formal order. In the later canvases, from mid-year on, the paint is thinner, first shots show through, are allowed to stand; indeed he uses them to qualify the effect of second third fourth strokes, exploits their possibility for variation and complex interweaving of the bands of colour. Everything in the process is allowed to show formal order; an older criterion for painting as product, diminishes in importance. In these later paintings he is ready to discover a new order, not predictable, in the unfolding of events, not in the balancing of forms.

There are a few good young painters working in New Zealand but I doubt whether there's anyone working as intensely or radically as Maddox at such an opening up of possibility in painting. There is much in his painting of this year that expands on a line of painting from Christchurch in the painterliness of the style but with none of the disadvantages of the tail-end of what used to be called semiabstraction, its closed form, dependence on formal criteria, its avoidance of concreteness or its subjectivity. Maddox takes up rather the non-figurative patterning that is most familiar in Killeen's work. Whatever Maddox may accomplish in the future, he's made his mark already with this year's paintings.