The Great New Zealand Myth
and the Traditions of the Maori

D.R. Simmonds, in his book The Great New Zealand Myth, published by A.H. and A.W. Reed last October, re-examined the commonly understood stories of Maori origins.  In turning to true Maori tradition he found a treasure-house of fascinating information about what Maori elders believed to be their origins.

The art of oratory. . . In a Maori context the art of whaikorero can be described at its simplest as the art of oratory. At its peak it is a subtle weaving of oratory, poetry, song and dance forms. A speaker on a marae can use his voice, body, hands, legs and face in a combination of all these forms. The cadenced rhythm of the opening dedication to the dead leads naturally to the gradual development of a theme emphasized by a strutting walk, quick turn and jump. So it carries on, the marae being the stage where all the appropriate treasures of knowledge are brought forth in their due turn. The whole closing with a sung poem, a waiata. It may be a poignant lament for lost land, a love song, or a poem celebrating the beauty of the cicada's song. These are some aspects of whaikorero.

The same men who perform on the marae are also those who speak at night in the meeting house or talk to their grandchildren telling tales, pakiwaitara . . . tales of things that happened as long ago as yesterday, or as recently as the time the first ancestors of the tribe settled on their lands... gentle tales of love which founded tribes, of Te Huhuti and Whatuiapiti, of Hinemoa and Tutanekai or the more stirring stories of warriors. 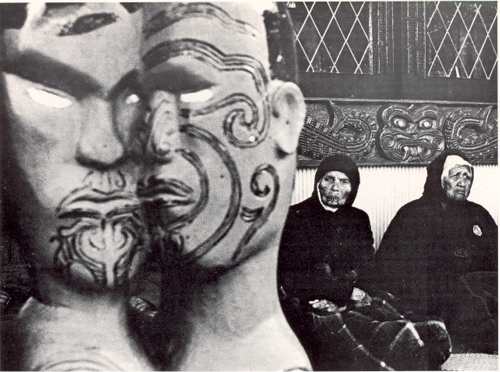 Kuia Moko on Mangere marae, with carving in foreground representing the hongi or greeting
Photograph by Marti Friedlander

These stories, though, could be told around a fire: others could not. Those who were deemed worthy were taught in special whare-wananga, a name we now give to the University.

Each tribal area had its own whare wananga and each was different. They could not, and would not, tell the traditions of another tribal area. The invariable answer to any question regarding another tribe is 'Go and ask them'.

The early European travellers in the Pacific were vitally interested in the Polynesian peoples. Captain Cook left England in 1768 amid a fierce debate as to whether the Polynesians had peopled the vast area of the Pacific from America or Asia. I n New Zealand with the help of Tupaea, the Tahitian, questions were asked as to the origin of the Maori, a people who had been isolated for so long that they called themselves maori, ordinary. Not much was gleaned in the eighteenth century but the interest continued in the nineteenth century. Sir George Grey when he became Governor in 1845 found that even vaguely to understand letters written to him he had to learn the traditional poems and legends so often referred to. Grey in fact collected so well that there are five hundred Maori poems published by him as well as legends and stories.

Detail from a manuscript relating tribal history, written in 1846 by Eruera Te Uremutu, an Arawa chief of Rotorua
(collection of the Alexander Turnbull Library)

But these are not all that are in his manuscripts. Grey left ten thousand pages of manuscript written by the learned men of his time. There are another five hundred waiata or poems yet to be published. The traditions collected by Grey, Edward Shortland, WilliamColenso, Richard Taylor and many others are still preserved. Most of them are not very different to what can be heard on a marae today. There may be a different emphasis to the story, or the genealogy may follow another line. Times have changed and oral traditions do not resist change. The most beautiful and valuable source of traditional knowledge are the waiata or poems. These are much more resistant to change.

When archaeological excavations started in New Zealand in 1852 the interested men were startled to find that Maori culture of the time of the moa was quite different to late Maori culture as seen by Captain Cook. The two strata theory of two differing populations replacing each other was common at the time to explain the wide variety of physical types found in Polynesian populations. It was applied to New Zealand, though modified somewhat with the strata, both being Polynesian, the moa hunters of Von Haast writing in 1872 and the Maori.

There the matter rested: but not for long. Europeans and some younger Maori were not content to leave the prehistory of New Zealand to await further discoveries. They looked to Maori tradition to explain the who, what and where of ancient times. The European passion for calendar dates for the various events was satisfied by taking the genealogies accompanying the traditions and using these as a basis for obtaining dates.

The most notable figure in this search was Stephenson Percy Smith, Surveyor General, founder of the Polynesian Society and a considerable Maori scholar. He it was who presented a prehistory for New Zealand based on Maori tradition. In his book published in 1910 usually called Taranaki Coast but also known as History and Traditions of the Maoris of the West Coast of the North Island of New Zealand Smith 'fixed' the dates of the first explorer Kupe at 925 AD, Toi the early settler at 1150 AD, and the Great Fleet of the Maori at 1350 AD. This prehistoric framework was accepted by such a noted Maori scholar as Sir Peter Buck (Te Rangi Hiroa) and used by historians as an introduction before dealing with the history of New Zealand.

Arawa elders on their marae at Orakei Korako, about 1896.  Men such as these kept the arts of their tribe alive.  Their descendents have learnt well; and the beauty of speech and poetry is still theirs.

This framework was not seriously questioned for fifty years - in public at least. Learned Maori elders had their own traditions relating to their own tribes which did not accord with this framework at all.

It is this traditional prehistory that I set out to examine in my book. A search for the sources of what I now call 'The Great New Zealand Myth' of Kupe, Toi and the Fleet, had surprising results. In this form they did not exist in the old manuscripts nor in the whaikorero of learned men. Bits and pieces there were. Kupe was and is known, in the traditions of the Hokianga, Waikato, East Coast and South Island: but the genealogies given did not tally with those given by S. Percy Smith. The stories given by Smith were a mixture of differing tribal tradition.

In other words the whole tradition as given by Smith was pakeha, not Maori. Similarly, the story of Toi and Whatonga and the canoe race leading to settlement in New Zealand could not be authenticated except from the one man who gave it to Percy Smith. Learned men of the same tribe make no mention of this story and there are no waiata celebrating their deeds. Tribal origin canoes are well known to the tribes belonging to them: but none of them talk as Smith did of six large sea-going canoes setting out together from Raiatea. The Great New Zealand Myth was just that. And moreover, it was only fifty years old!

A more important task, though, was to find out just what the tribal traditions were as regards their own origin. As I progressed so my respect grew for the learned elders of olden times whose manuscripts and songs I was seeing and for the truly learned men of today, to whom I had the privilege of listening. I found that their knowledge was such that when they said that the Tainui canoe brought karaka trees, or that the Tama Te Kapua of Arawa released saddlebacks when he arrived, they meant what they said. It was not my task to contradict them and say that this was a figurative way of saying something else. No, their words are clear. The Hawaiki or homeland of the Tainui was a place where people had karaka trees and knew their value. Similarly the Hawaiki of Arawa was a place were saddlebacks bred. The Hawaiki of the Takitimu canoe is pretty clearly within New Zealand. It is not unlikely that the last Hawaikis of some of the other canoes are there as well.

Tribal traditions are each peculiar to a tribe. As sources of information they can bring up people of the past whom we can meet as the stories are retold or whose thoughts and emotions we can share in their poems five thousand or more of them. The traditions are the stories of a people. From them we can learn so much, provided we greet them sympathetically. The voices of the past can be heard when the Maori version of Grey's Polynesian Mythology is read out loud. The same spoken rhythms can be heard on the marae.