The paintings were hung closely with very little space in between. They filled and dominated the gallery and the life-of-lines extended beyond the canvases and out into the room.

Both painters used the same sized canvas. Reynolds joined two canvases together, one primed and one unprimed right next to each other. A shift was evident between the white ground. of one and the ecru, calico ground of the other. Dashper also used the white background colour of his canvas, allowing large areas of it to show through. 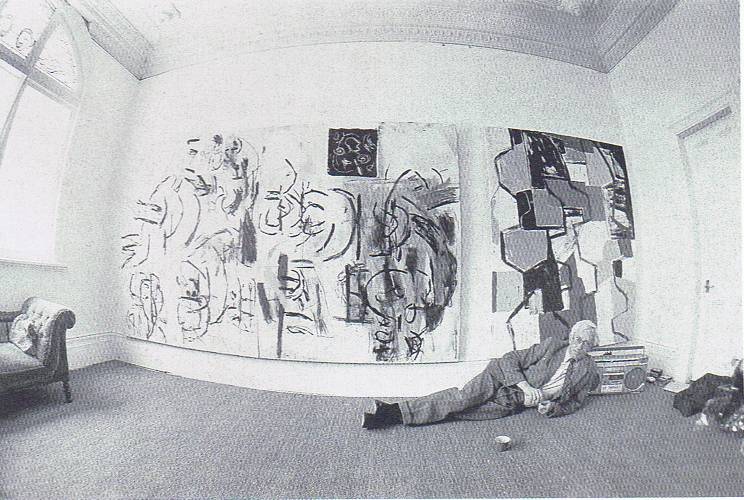 In the works of Reynolds the colours are all dark: browns, blacks, darkest blues, with occasionally a slash of bright blue or yellow. There is an ambiguity between what emerges as line from the background, struggling out from behind washes and what lines are floating freely, describing their lives on and above the physical surface. Pieces of paper are attached to the tops of the canvas with marks on them. Black on white and white on black, the tremulous, vigorous marks move rapidly, destroying themselves as soon as they emerge. Lines feather and spread fat and then thin, sucking their sides in and disappearing.

The line movement in these paintings throws up a chimera; a movement towards order; an attempt to discover reason and unscramble the chaos. It tempts with a rational lead - an on-line substantiality - and then subverts that, turning back on itself in irony.

The heavier the volume of traffic year-by-year on a motorway system the more it needs to be revised and extended, and the more it is extended the heavier the demands on the system. Similarly, the limits that we impose on painting, on style, are arbitrary in that whatever barriers are removed, whatever new limits are set, they will always be fulfilled, their potential reached and the impetus for new growth and movement demanded.

We see this in the work of these two painters. The lines extend beyond their confines and outside into the street, where they continue their existence on the pavement, on the torn corner of a poster flapping in the wind, in the marks on the road, in the chalked-up prices in the fruit shop.

No matter what street experience is brought into the gallery it does not survive beyond the threshold of this room. I stand in the middle and just as I reach a stillness with one of the paintings, there is a disquieting flash of colour, a bright blue serpentine or a yellow tail in the corner of my eye that pulls me around, head turning to the next. There is no resting point here. There is unease in all this movement. 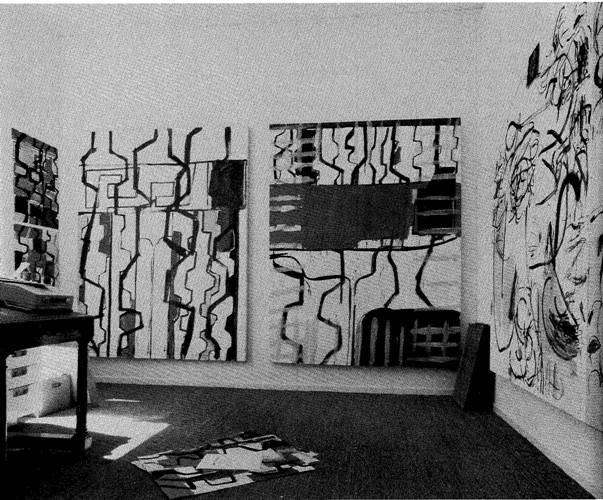 In Dashper's work the titles of his paintings and the relationship between titles and paintings are important. Both artists have used 'place' as their titles. The difference between their use of ‘place' is that Dashper has taken one specific place - Sheraton with its culturally defined meaning, its association as tourist hotel - and manipulated it so that meaning is totally changed. His paintings are places both spiritual and commercial. Sheraton becomes a metaphor for the experience of rural and urban in Rural Sheraton. How are we to interpret the painting when Dashper's manipulation of image extends reflexively? Sheraton which we recognize as urban first becomes rural later. There is little to distinguish Anglican Church at Matauri Bay from Sheraton. Yet Dashper's dialogue with them resonates. I think his contact with these places was specific and intentional. His comment both individualises and informs them. The paintings are a map of these places: place as spirit, resting places visited by many. The lines on the paintings are networks; they conceal and they reveal.

The experiences that its inhabitants bring to a hotel are all international, but for a brief period they converge and share a common experience. We live a transient life; we arrive and we leave. We search for order; we create meaning and then destroy it.

The works of both these painters acknowledge that. They are about living in New Zealand and living in the world at the same time. There is simultaneously order and disorder. Everything is in motion, and to survive change we abstract our experience. We reflect ourselves back on the world according to the abstractions we have made.

The works of Reynolds and Dashper throw out a challenge. They challenge the confines built around style. Time and place and the coincidence of the two in this event, in these paintings, challenge the old boundaries of style and the context of New Zealand art in the International Theatre.