A Continuous Dialogue with Clay

If art is to present an idiosyncratic view of the world, then, when viewing Brian Gartside's pieces, it is as though we are asked to forget that they are made of clay and to accept their individual imagery - of motifs and symbols which are not only associated with environmental phenomena, but also interact in association with each other. This `surface information' becomes a personal vocabulary or iconography, developed from a particular obsessive vision and persistence in the act of drawing, augmenting the internal images which appear during the dialogue. 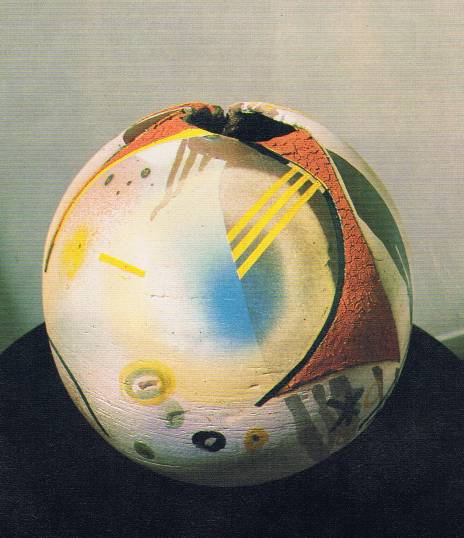 Drawing is a form of handwriting—personal, perceptive, insightful—'that inward eye which is the bliss of solitude': releasing material from the visual memory into a new reality. For Gartside, Richard Bach's statement has significance: `isn't it strange how much we know if only we ask ourselves instead of asking someone else.' With such an interest in symbolic graphic imagery, with experiential roots in the art of the sixties in Great Britain, clay appears as an odd choice to use as a vehicle or 'canvas' with which to work. But for Gartside clay feels comfortable, for he can interact with its unique characteristics, its very physical, tangible aspects, its energy contradictions, its changing states throughout all the process of making.

Working with clay is a process-orientated art a close or intimate involvement with the medium. Form in ceramics as traditionally sought and appreciated appears incidental in Gartside's work to the surface iconography and the exploitation of intentional or fortuitous configuration. The circular format which doubles as a plaque or plate provides one problem-solving experience—that of organising images upon an essentially flat surface as in painting: while the volumetric spherical vessels present another problem which deals with images involving multiferous views resulting in complex and diverse associations of the iconography. 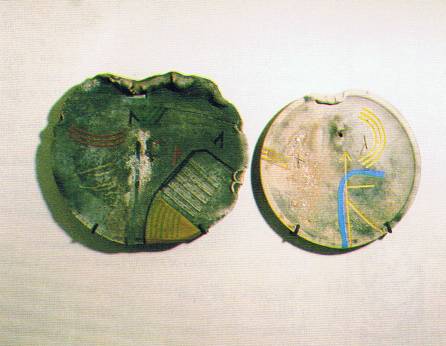 Changes over recent years have been from the early stoneware platters, where glaze-pours which overlay one glaze with another flux in the kiln and cause a third glaze-colour. These allude to an imagery of clouds, the shapes of land and the play of light and shadows upon water. The painterly aspect of the works is obvious, for they rest more easily as compositions from a baseline.

Later, figurative rhythms of the countryside relate to turbulent organic skies—the embryonic images that have become motifs and symbols of greater significance. ('Everything imagined is reality, the mind cannot conceive unreal things'—David Smith.) Here the circular form of the platter is of little consequence and does not impinge upon the surface information. This came later with the interest in the potential of raku firing, where the formation of a dialogue is increasingly in evidence. Here the edge of the circular form is less restrictive or rigid in its definition of the limits of the composition, and internal space is explored as a malleable area, to be prodded, stretched and even penetrated. 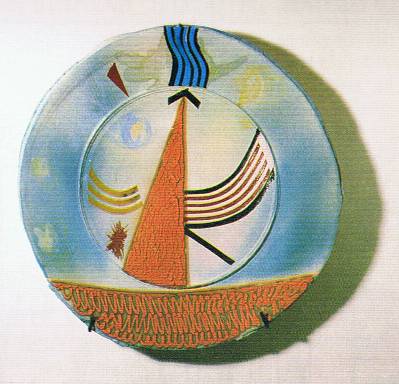 Coils of clay looped like glazed caterpillars, or clouds, arch like bridge supports across the top edge. There is more enjoyment of the physical process as an integral part of making the form.

Parallel to this move, stoneware platter forms expressed, through tightly surfaced undulations and a deep green glaze, the rolling countryside of his environment, without dependence on a set viewpoint. Gartside feels that to be free of restrictions means `There are no rules: only concepts, concepts mean wrapping things up!' Which sums up his acceptance of what clay can provide even when it is tired and lacking molecular energy: it offers a potential creative alternative. Imaginative observational powers move him to explore rents and tears which open the vessel's interior, and gouges from centering the clay—like spirals churned from the mass by a violent auger.

Many of the above characteristics were apparent in Brian Gartside's recent exhibition at New Vision Ceramics. This show comprised low-fired, large vessels and wall pieces, which had been retained as examples of significance to the artist from his work of the last five years. The development of surface information, whether glazed, enamelled, sprayed or built up through refractory contractions causing rich textures, and by superimposing patches on the surface, demands a shift in the aesthetic appreciation of ceramics. 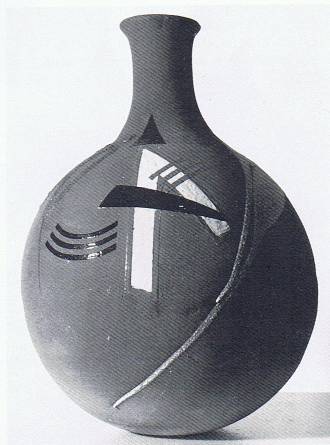 Here, rents and tears have a natural rhythm caused by fatigue stress (in contrast with the incisive scalpel cuts of Lucio Fontana's paintings): but they express an intrinsic tension—bold plasters patching the clay, adhering only to the surface and depending upon colour and texture to integrate with the total form.

The iconography is expressionistic—autographic gestures contrasting with deliberately designed symbols. Vermilion contractile slips, like carnage on a motorway, contrast the matt sandy sprayed surfaces which appear smooth until touched. This visual deception is again evident in the illusion of fragility created by the colours of the sprayed forms—black, turquoise and cobalt violet. The black ceramic pieces have a nuclear, charred quality, ominous and fascinating, while the large ovoid forms project a sensation of vulnerability, as though concealing a volcanic presence.

Gartside's motifs play a coded game as surface information, between the organic and geometric: a balance of tensions and dynamics and conflicts which describe symbolically order and disorder, structure and freedom, the intellectual and emotional.