In 1975 when Alan Brunton and I started the tabloid Spleen we were looking for the first of a series of artist interviews. There didn't seem to be much point fronting an established artist - who were we; and besides, most artists were too reticent.

Most important was the need to find an artist not yet tagged by received definitions of art history and criticism in New Zealand. What discussion there was tended to favour approaches derived from Anglophile landscape traditions, with notions of its acclimatisation to a local environment. That was fair enough, perhaps; but we were interested in looking through another view-finder. 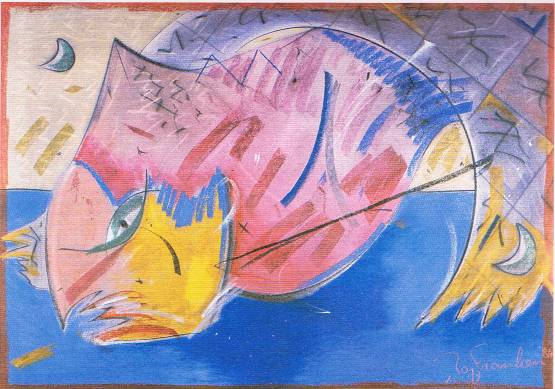 Robert Franken (born 1946, The Hague) was the first choice. He was foreign, his life-style was European-Gothic, he was an untiring raconteur, and unselfconscious when talking about himself; and his art, just then venturing from the surrealist pen-and-ink drawings into coloured works, seemed to have established skilled qualities, as well as potential.

Nor was he just a maverick—although he got annoyed when people talked about Bosch or Grunewald in the context of his work it clearly flowed with a European tradition. His admiration for Max Ernst was something he admitted then, along with this statement: `The style of my painting is very European. A special dark European.'

We found random connections in subsequent issues of Spleen, even in #1, where Tony Fomison talked about Van Gogh. In #2 Jacki Apple broadcast some thoughts about the feminine unconscious. In #4 appeared major pieces on Phil Clairmont, stressing his involuntary connection with the kind of German geist that had been quarantined with Mina Arndt in Motueka in 1916; and on Jim Allen, whose interest in ritual had produced a series of intense post-object meditations. Subsequent issues picked up traces in McCahon, the Australian language-artist Terry Smith, Len Lye, Van der Velden, Jeffrey Harris. 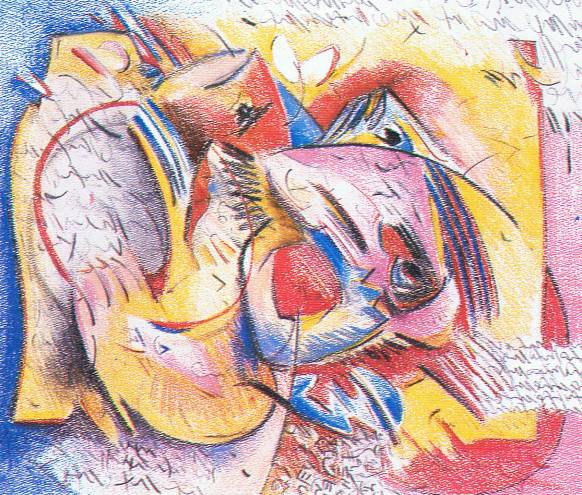 Through all this randomness ran a theme of interest in unconscious, subjective, 'dark', sometimes mystical or occult, experience. It was not necessarily bohemian, or therapeutic. An essential landscape, clear Pacific light, and the rationally disciplined use of media, were not, however, strong features.

The buck didn't stop at Cotton's geomorphology, nor at an `objective' palette that mixed possum dung with its greens and browns. We were delighted to celebrate the connection, via Ms Flora Scales, of Toss Woollaston with Hans Hofmann. We thought anyone who disparaged McCahon's visionary and religious qualities in favour of his `purely' painterly ones was being coy about content.

This coy conservatism has had trouble coping with Polynesia, Asia (it couldn't take Theo Schoon seriously, it thought Fomison was a crank); it has also had trouble accommodating Mrkusich (too European-esoteric); and it had particular trouble with Walters (combination of impeccable European and Polynesian). 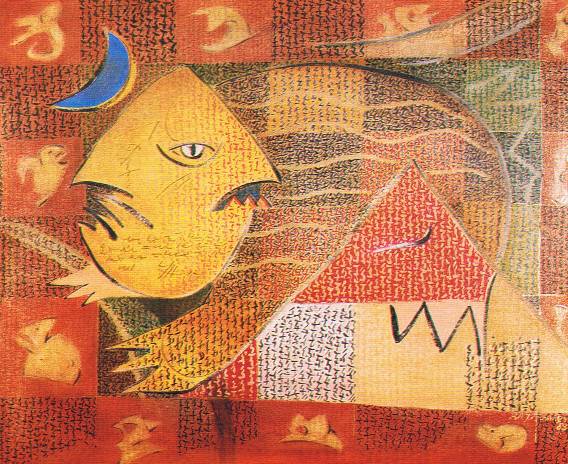 ROBERT FRANKEN Abtu and Anet keeping an eye out for the inevitable 1983 oil on canvasboard, 750 x 620 mm.

Idiosyncratic and anarchic (remember that Bosch, a mason, smuggled anti-Christian symbols into his triptych as well as blatantly esoteric (ever. picture tells a story) Franken may be, but he is not alone here. His origins in `dark European' are shared. So is his disregard for objective locality. But so is his vision of this place as being more attached to ocean, and to Asia, than to Europe, England, or America.

What singles him out, more than anything else, is the extension of these attitudes into a kind of trader aesthetic—hardly surprising considering his Dutch family connections with Indonesia—which often gives his work the air of the exotic curio rather than of the fine art object. His art seems entirely portable - souvenirable. He himself is obsessed with the disparity between mental and physical movement. Some of his work is clearly designed as a vehicle for ‘transportation'.

It's also clear that he paints in long runs, during extended periods of concentration, producing many pieces in a process that resembles more the transcending meditation of minutely varied repetitions, than it does the objectification, in a `finished' artwork, of a singular impulse. But I think it would be a mistake to write Franken off as an artist whose material is spread too thin. He's more involved with process than with product, despite the often obsessive detail of his early drawn surfaces, of his later calligraphies. 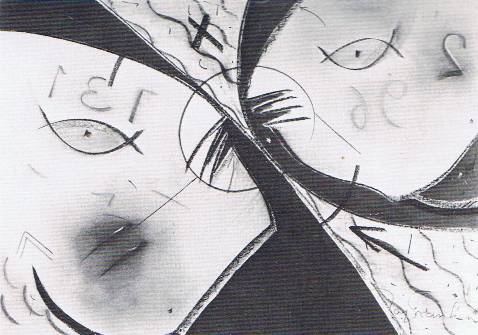 Franken himself is hardly everybody's idea of a delicate mystic. A large quiet man who moves carefully on legs that required surgery in childhood, he revels in the evidence that environment is constantly issuing straightforward invitations to ignore accepted frontiers: the cardamum in your coffee comes from Asia, the Geneva you drink from The Hague, this music from Japan, and you haven't even left your chair! Outside, as he's been fond of saying for years, distinctions between air and water run together: fish are swimming birds, birds are flying fish (their features appear constantly in his work), and the human mind is capable of travelling a long way from its host without getting even a bit lost. Why all the worry about having your feet on the ground? A liking for the occult, for mystic experience, is more to do with love of multilateral life than with anything else.

At the moment, Franken is enjoying hokku of the early Ado period. And the current work's horizons shift, as do the frames of reference in hokku. Early black and white drawings put everything in. Their solidity derived from sculptural training in Holland. Now, the pieces have space in them. First excursions into colour in '75 used ink lines -  the line of colour stood in for an area. The logic was internal: colour was not to be a seduction, a distraction of the eye away to some idea of reality outside the painting.

For Franken, however, these internal qualities unlock universals. There are worlds within worlds. People are capable of presenting many simultaneous profiles. My Journey Across the Styx (the title has a characteristically droll undertone) was a series done from '77 to '81. Franken imagined the ferryman Charon as a skeleton with a cape. Then he saw himself as a skeleton in a cape of flesh, his life as a journey in which he rows himself across the Styx, encountering demons and gods who are only present because he's perceiving them. 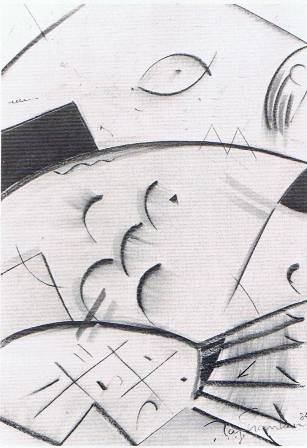 Work on the series coincided with a residency in Japan, travel in Asia, Europe, America, Canada. There were exhibitions at Tokyo Gallery in Nihobashi dori in '78, and in Gallery DeSluis in The Hague. In Canada and America, Franken worked very little None of my footsteps were there.

The Styx series are exquisite miniatures whose calligraphy is a satire of the impenetrable dogmas of artificial memories. At the same time, these signs and symbols and scratches are about sources: they are memory traces, footprints, mnemonics. In Japan, Franken earned the nickname Shi-sha an errand-boy between gods and men, always running up and down.

Memory is structure, and art must help us remember what's important. Each individual contributes a fragment to the memory. The element of individuality involves being honest about your proximity to source. Source is communal and common. A possessive approach to source and material will result in obsessions with product.

Franken incorporates the journey in the arrival. Recent paintings contain fixed points, like stars. There's also a prevalent warped moon-trail. These works follow on from the more intensely concentrated Styx series. `You make the journey to style', says Franken carefully, `and having found it, you work from there. Styx is part of me now. My work will develop from here. I won't change "my style".'

The series was shown in Berne, Switzerland, in '82, at the Galerie Loeb, together with the Manuscript series. That show recorded a confluence of lines of enquiry. It came back to the Janne Land Gallery at the end of '83. Since then, Franken has become increasingly interested in moving his designs out. He would like to see them incorporated into carpets, weaving, banners, jewellery. He has done some very beautiful works on silk, which remind me of the unselfconsciousness with which Raoul Dufy shifted design to silk and crepe-de-chine. 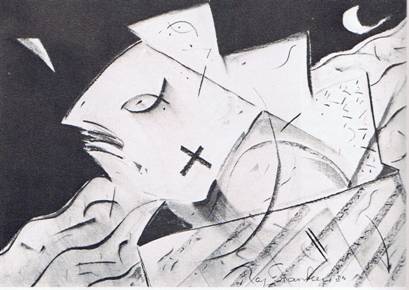 Present works (mostly pastels, with some larger oil paintings) work from that confluence, and retrace some of the artist's footsteps. The terrain is now familiar, the logic absorbed, and the sense of process of which Franken speaks unfolds here with serenity and confidence. The paintings are like maps of known territories. The hectic anecdotes of early work have given way to something not merely decorative (although some of these works do ravish the senses) but somehow close to that communal source Franken talks about. He remembers how, in the Sudan, `art' created the context in which it existed. Structure and memory, source and individual, worlds within worlds, the esoteric and the universal—and now. despite their portability, works that with tranquility exist where they are. You wouldn't want to say that the amount of water in them, the number of stars, make them `Oceanic'. But neither can you shake the feeling that Franken's internal logics of colour and content have absorbed the communal here.

Rather than being appropriated to external factors (light, landscape) the art has absorbed its whereabouts into the communality of its sources. As an alternative to the sound advice that art should settle down, this trader's aesthetic is a refreshment and a recreation for dutiful senses.