Extending the Limits of the Print Media

Since her student years at Elam School of Fine Arts, Victoria Edwards has always seen the limitations of the various printmaking techniques as a challenge: as barriers to be overcome. She has determined to push media beyond their accepted limits to achieve results which seemed at the outset to be impossible. 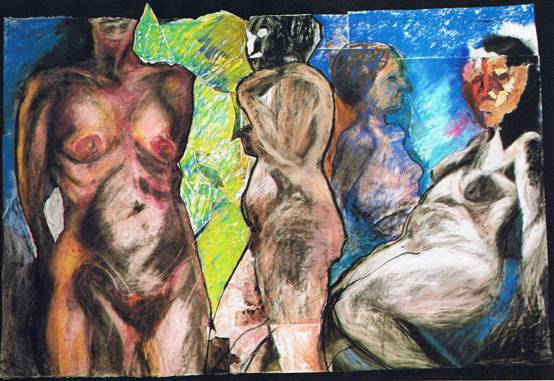 Having once attained the image she wants, Edwards has seldom produced editions of her work. The multiple, almost identical original capacity of printmaking is not a major concern for her. In fact her etching techniques have often led to plates which would print off only two or three images before breaking down. Edwards ruefully notes that if a printmaker produces a large edition of a series of prints and they are widely seen, they can become identified as particularly representative of that artist's style. For an artist whose style of work and use of media is constantly changing, this can be a definite disadvantage.

Victoria Edwards has not allowed her fascination with the technical difficulties of printmaking to restrict the variety and direction of her work. She has exhibited wood, fabric and metal constructions, drawings, collages and paper-pulp works as well as etchings and lithographs. Throughout her work she has returned constantly to the human figure as subject. Her concern is with gesture, with manner and mannerism; with the way posture and stance can be strong indicators of individual states of mind; with the way women's bodies can reveal their histories. 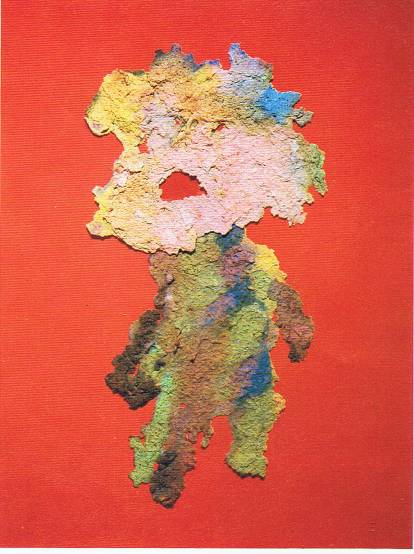 A particularly appealing work from 1972 is the etching Red Legs. Large legs with Roman sandals on the feet turn in towards each other, indicating diffidence and discomfort. Edwards sees the work as a spoof on fashion; a reaction against the skinny legs and very high-heeled shoes then considered fashionable for women. She makes these red legs powerful and important; having a strong presence which they would not be accorded in the everyday world. 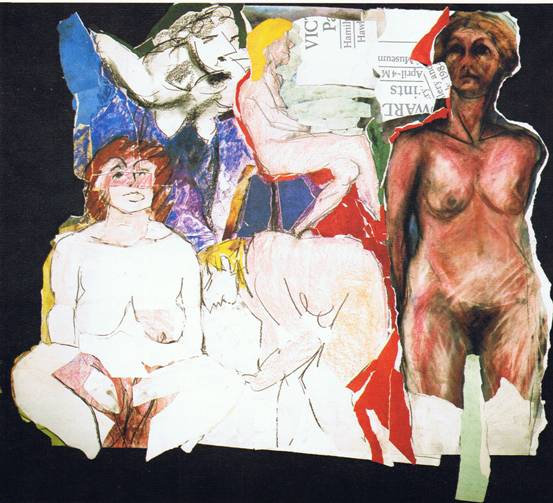 Victoria Edwards exhibited very little between 1978 and 1981. She was lecturing in printmaking at the Elam School of Fine Arts. She had her first child, Francesca, and began to work with torn paper assemblages, exploring the properties of colour isolated from figurative concerns. She also made fragile constructions from twigs and cloths, and entire large hangings made by stitching together pieces of fabric. These fabric pieces were the rags she used for wiping excess ink from etching plates. So they were also `prints' in the sense that the ink from the plate was printed on to them. Edwards was interested in working in a more three-dimensional medium, and also in the idea of using discarded materials: a practice she has continued in her most recent paper-pulp works. The fabric hangings summon associations with skins, clothing, veils and outer coverings; she exhibited a number in 1981 at the Rotorua Art Gallery, and they made a sharp contrast with the work she had shown previously.

In 1983 she exhibited a large series of pastel and charcoal drawings of women at RKS Art in Auckland, and this exhibition demonstrated another apparent change of direction. Yet these Drawings from Life' were a continuation of her long-standing preoccupation with the human figure. Edwards says she had heard suggestions that the birth of the children signified the demise of her career as an artist, and she felt the need to re-assert herself in the art world. 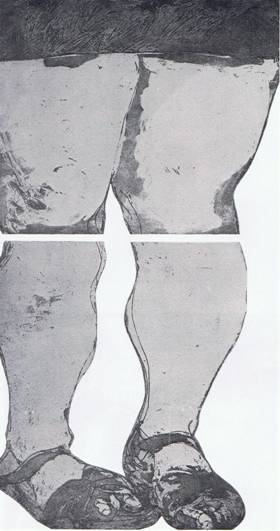 The life drawings were the result of long sessions spent with two models whom she came to know well, and with whom she has a strong rapport. This closeness was vital for the success of the works. Edwards was conscious of a wish to use a disciplined working process, and while making these drawings she ensured that every mark made on the paper related to the model; she did no work on the drawings after the model had gone. She worked with large sheets of paper on the floor, and forced the pastel into the paper; rubbing back to achieve white areas.

The result of these intense working sessions is a series of monumental drawings. In most of them the figure gazes down at the viewer: a result of Edwards's working method, which contributes to the sense of confrontation between the figure and the viewer. In some of the drawings she appears to be bursting out of the frame, knees pressed close up against the glass: there is no idealizing in these works. Edwards rejected all the drawings in which the figure stood side-on to the viewer, preferring strongly frontal positions.

She sees this preference as part of her determination to assert herself as a working artist once again, and to provoke a response to the works. Edwards sees the works as honest and strong; she was looking for the reality of the woman she was drawing: for traces of the life and experience which have shaped and marked her face and body. Again Edwards's interest in gesture, manner and stance is evident. 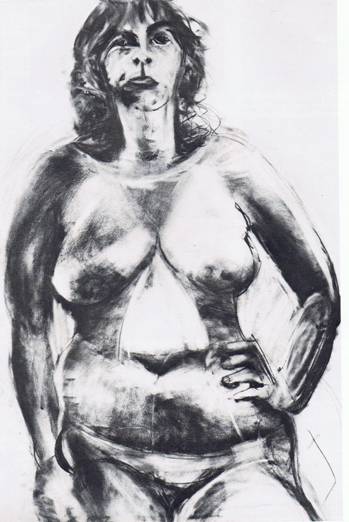 There has been discussion of these drawings in the context of the voyeurism and exploitation which are historical connotations of the male portrayals of the female nude. Women artists portraying the female nude must be aware of the problem of showing women as they are, and avoiding the exploitation trap. Most of Victoria Edwards's women are strong and determined; proud of themselves and their un-ideal bodies; sure of their own reality. But some are downcast and damaged by their experiences; isolated, vulnerable and wary. Edwards tried also to make the limited clothing worn by the model part of her statement. She was concerned with the way clothing both conceals the body, and draws attention to it. The drawings are not sweetly tender, but direct, uncompromising, and occasionally sad.

In 1984 Victoria Edwards made a series of colour lithographs with the assistance of master printer Graeme Cornwell. They were again of female figures, and Edwards used them to explore the possibilities of the medium; to push it as far as she could. Although each image is repeated many times, no two prints use the same colours or the same number of lithographic stones. The images remain recognizably the same, but changes in density and range of colour ensure that the mood of each work is different.

In one of the prints, a woman stands with her back to the viewer, head turned to the side, set against a background of horizontal and diagonal lines. Here Edwards again imposed a discipline on herself, drawing the woman in traditional life-drawing style, using graduated tones to modulate the muscle and skin of her back. As she printed this image, Edwards added more colour and used more stones, so that the figure and ground began to meld together, and the artist's enjoyment of dense and beautiful colour eventually supercedes the initial drawing.

These are printmaker's prints: technically immaculate and visually exciting. She made any discarded prints into paper-pulp and began working with this new medium: again pushing against technical limitations. She mixed up the pulp in buckets, dyed it with paint, then poured and flung it on to book-binders' muslin which was laid out on the grass. When the pulp dried, it could be lifted off the muslin and pinned to the wall. Many of these pulp works are witty and lighthearted.

She also used fragments of dried pulp in collages; allowing the shape and colour of each piece to suggest its use. Baby (1984) is one such work. Edwards says she tried to use this fragment in another way, but its shape and colour were undeniably suggestive of the open mouth and reddened cheeks of her baby daughter, Miro, who was then waking often during the night.

Edwards also began this year to re-use the life drawings she had rejected from her 1983 sessions: those in which the model stood side-on to the viewer. She put them together in large paper collages, creating groups of figures which complicate the original drawings, giving them a new context. These figure groups are impressive in size and complexity. There are suggestions of relationships amongst the women, but also of a continuing, damaging isolation—particularly evident in The Masks. These large collages sum up many of Edwards's continuing concerns—the human figure, enjoyment of colour, the re-use of discarded materials and the continuing search for new uses of media. Her work over the past fifteen years is impressive and memorable.