At the beginning of this year the Dunedin Public Art Gallery field a retrospective exhibition of Peter Nicholls's sculptures. Nicholls is very prolific, adding to his them s rather than discarding them. It is possible to trace several histories in his work. 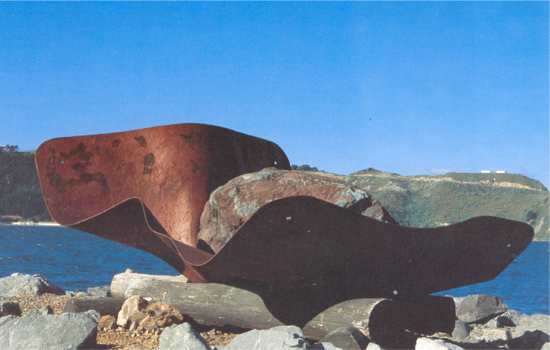 His main theme is a continually shifting dialogue between the physical properties of energy and matter and ways of experiencing them. A secondary theme is time: the past, time as it is felt in the experiencing of a piece - what Robert Morris called the present tense of space - and time as an element in the process of making. His approach to the materials he uses is both aggressive and intimate. More than any other sculptor in New Zealand he gives a sensual emphasis to his work which can be explicitly sexual and extremely masculine. When he involves the viewer's sense of personal space that intimacy can seem threatening, but finally his works always end at a point of rest, however precariously balanced. 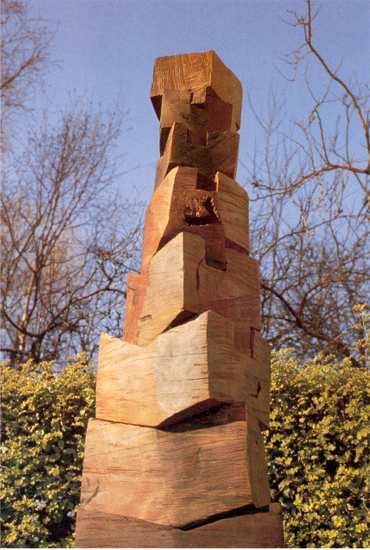 Nicholls represented New Zealand in the Edmonton Commonwealth Games Sculpture Symposium in 1978, and spent that year as a graduate assistant at the University of Wisconsin, USA. He travelled, studying contemporary American sculpture, focusing on the works of those sculptors he sees as synthesising the gestural and minimal movements - in particular Richard Serra, Robert Grosvenor and Jaquie Winsor. Their emphasis on contained energy and process, and the psychological testing of the work of George Trakas, are influences he has since been working through. The anthropomorphism and occasional technical fussiness of his work has largely disappeared; his monumental pieces no longer present an analogue of human domination over matter but work either with matter itself or with human susceptibility to forces only just under control. 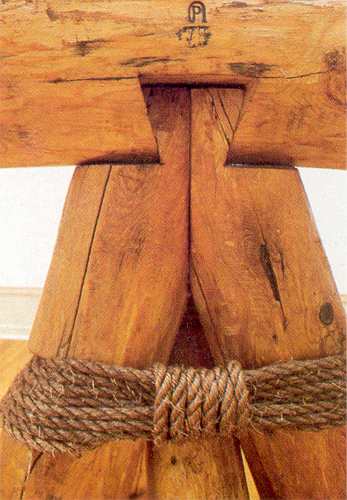 Nicholls has always worked in series. The New Land pieces of the the mid-seventies, the most ambitious statement of which was his Edmonton piece, Kinetic Counterpoise, concentrated on the domination of land, using materials and techniques similar to those of the pioneers. In his earlier Probe series his forms had been anthropomorphic; in the New Land pieces his imagery is that of the landscape. He incorporated into these the shape of an old plough he found, lowering and extending the physical emphasis of his work, with long wooden arms reaching across the ground. In his Lissom series he also used long wooden arm-like forms but cantilevered them with wire strainers in a more delicate system of balance derived fro dance forms. A more cerebral and calm quality is present in the pieces where tools are embedded in wood, their purpose and active life ended.

Although Nicholls occasionally returns to these themes, during the mid-seventies the emphasis of his work gradually shifted from human analogies to a concentration on the more abstract qualities of power and balance. 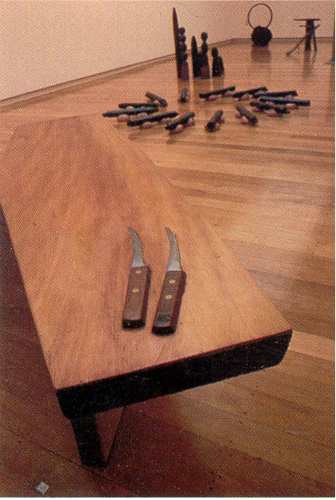 In Wisconsin he began a series of tall wooden pillars, slightly tilted and anchored by angled extensions. These are the first pieces which act explicitly on the viewer's sense of personal equilibrium. Wisconsin Series No. 5, in collection of the Dunedin Public Gallery, is a pillar which is held to earth by a long foot which ends in a fitted piece of lead weighing fifty kilogrammes. The pillar leans disturbingly toward the viewer and away from its foot. The contradictions between its monumentality and its need for such an anchor work both in the physical structure of the piece and the ways its shape affects the viewer.

100° Twist (1982) and Arch (1983) were further developments of this theme; carved sections of wood were stacked and twisted as far as was possible without unbalancing the structure. Both are in Nicholls's preferred scale - just taller than a large man. The arch of the second piece is slightly too small to walk through. There is an explicit play in these works on Nicholls's interest in a synthesis between gestural and minimal works; the units are modular; but their surfaces, particularly those of 100° Twist, have been adzed and roughened. 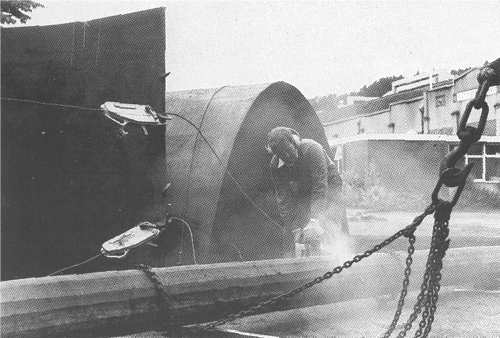 Compressions and Constrictions, both 1980, were studies of power exerted over matter, almost stuffing it with a history of transformation. Constrictions is a serial work. Ten sections of hardwood logs lie in a loose spiral. They have been capped by forged and shrunken steel bands and lead poured into any interstices. They are mutely sinister and enormously dense, sluggish bullets of power. Compressions, shown with the Aramoana exhibition, was four ceramic pads squashed between chunks of steel. Both clay and steel have been subjected to heat and the piece gives the past tense of the action, a translation of the original materials. 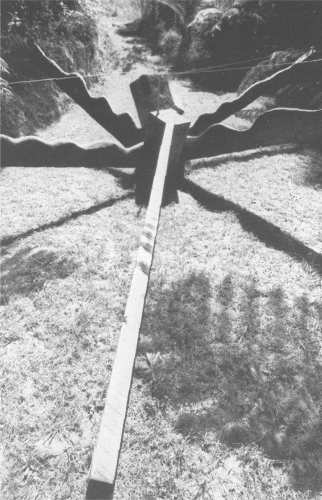 Nicholls's Hansells piece of the same year was a steel arch anchored by two 21/2 tonne boulders, with a fire lit under the steel. The idea was further developed in Full Stop, at F1, where Nicholls, with the help of the New Zealand Army Engineers, (another sort of power), dropped a three tonne boulder on to a large, heated steel sheet, which crumpled and partially wrapped itself around the rock in a catharsis of a sort seldom experienced without danger. The resulting form was rust-treated and set on a hardwood cradle near where it was made. There is some artifice in its placing, but the main form is as it occurred, a product of the process without further intervention. 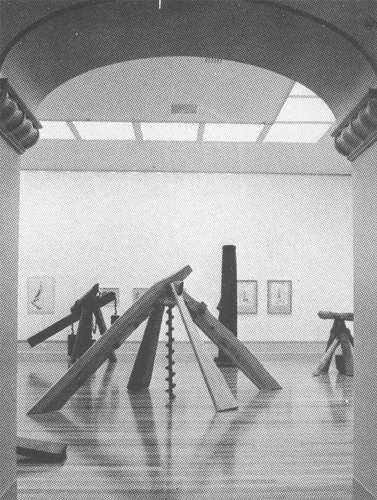 For his retrospective, Nicholls again worked with steel under high pressure. Sprung Arc (Times Three) was an almost baroque synthesis of process and psychological experimentation. A single steel cable, with some help from three telegraph posts, held three steel sheets in position, two vertically and one horizontally arched. Both calmness and threat were present. Walking in it involved a considerable degree of trust in the sculptor; looking from the one metal anchor to the tilted telegraph poles above was unnerving, yet the work had a calm relationship with the bowl of the valley and playing fields it was placed in. The length of time one had to take to see it from its many aspects and to walk through and around it had a contemplative effect. 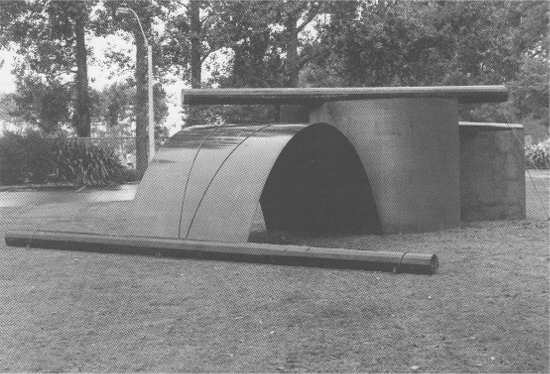 I've concentrated on the monumental works. One could equally well concentrate on the spring steel works, a continuation of the Lissom series, where counterpoise is used kinetically. Nicholls is in mid-career, and what directions his work will take depend very much on public response to it. To be a monumental sculptor one must have commissions. Sprung Arc (Times Three) was a compromise, temporarily erected with borrowed materials, something which allowed him to take the risks he did: but other proposals involve a more permanent transformation of materials.