Documentary Cinema in the Making

Recently three film-makers met to talk about documentary film-making. Each was at a differing stage with their project. Gregor Nicholas had just completed Every Dancer's Dream, an intimate portrait of two of the top New Zealand ballroom dancing couples. Shereen Maloney was midway through a film about her father, titled Doc: a fifteen-minute portrait-documentary to accompany Irene 59, the film about her mother. Peter Wells was beginning a half-hour documentary about the art deco architecture of Napier. Both Wells's and Nicholas's documentaries had been funded by TVNZ, and a lot of the discussion centred around the demands of making a television programme within a commercial parameter. Nicholas had suggested that a more personal style of film, such as all three had been making up until that time, would mean 'you'd never get any funding from TV to make another film'. 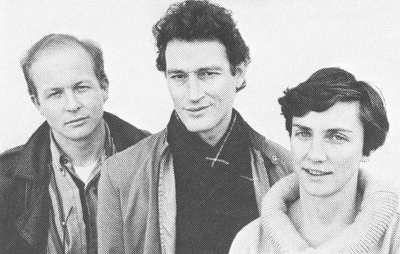 Did you find anything unexpected when you were editing Every Dancer's Dream from when you were making it? Nicholas: Well it's two different kinds of creative buzzes. Like, when you're filming it's very ... easy to be ... to be carried away by the situation, specially the big event we filmed, it's very hard to maintain what to and how to cover it ... but to maintain a clear mind, it's very difficult. Wells: It is a contradiction because here you're saying about following your intuitions ... Nicholas: Yeah, sure, it's not so much a contradiction ... when I say that I mean ... actually I find it exciting, quite exciting work ... because nothing is predictable ... because you are relying on your intuitions ... but instead of relying on actual content the actual process itself... the excitement of it can supercede the concentration required on the subject ... you have to really keep yourself in check. Wells: Do you think the case of people filming a krillion feet of film is a case of intuition running wild ... or there being no intuition? Nicholas: If you don't have clarity ... that to me sounds like you don't know what to say. Maloney: You've got to have the confidence to say I've got enough ... Wells: How come we're all making documentaries at present? Do you think it's a particular need of the hour? NZ seems at such an interesting stage at the moment, actually evolving an identity, breaking out ... Maloney: Basically it's an exploration of our identity as a culture. Maybe we need to do it fairly directly, by immersing ourselves in the culture rather than reconstructing it in a dramatic form .. Nicholas: Be directly involved with the real thing ... Wells: For me, the Napier thing is definitely all about us recognising and valuing what we have... Nicholas: Recognising an identity and feeling good about it ... That's what's so good whenever I'm in Australia ... there's this wonderful feeling of vivacity ... Wells: joy ... Nicholas: In their own history ... even though some of it is definitely spoiled ... Wells: I think you is something we've almost been persuaded to forget ... by the grandfathers ... their power during the Muldoon years ... Nicholas: It's something I've tried to infuse into Every Dancer's Dream ... I've tried deliberately to work against that condescension towards a working-class art-form ... Maloney: I think it's one of the reasons I make films.