The Fabric Art Company is a group of eight women who met each other for the first time at a WEA weekend workshop on fabric art, in Wellington, 1981. This chance meeting proved to be magical: for out of the ashes of suburban domesticity has flared an artistic co-operative that has set Wellington alight with its wit, imagination and talent. 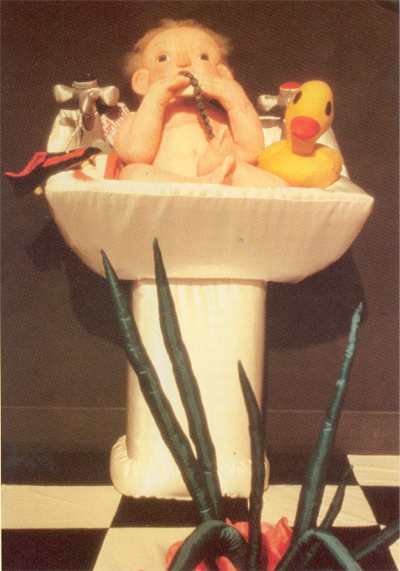 JILL GUNN Me and rubber duckie

The show was a magnet for young and old. For those who had never been to an art gallery before, it was like entering the fantasy world of Christmas window displays in department stores such as James Smiths in Wellington, Smith and Caughey in Auckland, Myers of Melbourne, or Maceys in New York.

For art gallery pundits, the Fabric Art Company encompasses all the humour and scale of Claes Oldenburg's soft sculpture, the reflective qualities of George Segal's three, dimensional tableaux and the tough social commentary of Edward Kienholz. Yet it left you in no doubt that this was the work of women, who through their art were speaking for all women in New Zealand who think that marriage, beds and babies was their lot in life. in other words behind this happy scenario of fun and fantasy is a serious message.

As the exhibition's catalogue states: We are all women with children and the home environment is one in which we spend a great deal of time. It is within this area of familiarity that we have chosen to share with you sonic personalities, situations and thoughts that most of us have at some time encountered in our day-to-day lives. Which family doesn't have a dear Granny whose obsession is knitting, or a beer-drinking cousin called Bruce or Trev? Children wouldn't be children if there wasn't a trail of debris left behind them.

Fabric Art is not bitter stuff; it doesn't reject the domestic scene - neither does it accept the drudgery and repetition of babies and housekeeping. Rather, it is a celebration of womanhood. The Fabric Art Company are a group of people who enjoy being themselves. Their art is a personal commentary on their world, a three-dimensional diary of the joys and sorrows of daily events. Fabric Art celebrates self, but does not condemn, it communicates a vitality and a truth that touches others.

A typical work is Personal Stuff, a floor-piece which includes Bathmates by Noeline Black and Val Griffith-Jones; Me and rubber duckie by Jill Gunn; and Who's the fairest of them all by Val Griffith-Jones. The artists make their own comment on their works: Our houses are always, alive with people. It's lovely but sometimes hard to find time together with our husbands. We recognise the need to do so and any plots for time are well received. Fred and Mabel found the only peaceful place was in the bath but we are not sure on this occasion (hey have the same thing in mind. (Noeline Black and Vat Griffith-Jones)

I really wanted to make fabric taps. The shape of them fascinated me and the challenge of making them in fabric was fun too. I really loved to work in this three-dimensional way. I suspected that like me, lots of mothers bathed their babies in the basin every now and then. Rubber duckie was always squashed in somewhere and inevitably baby would pull the plug out and chew it. (Jill Gunn)

In the morning at our house each person is involved with their own problem - where's my . . . breakfast - lunch-box - keys - bikepump, and so on. This portrait of the family shows each member and their concern about the face they will show to the world this day. (Val Griffith-Jones) 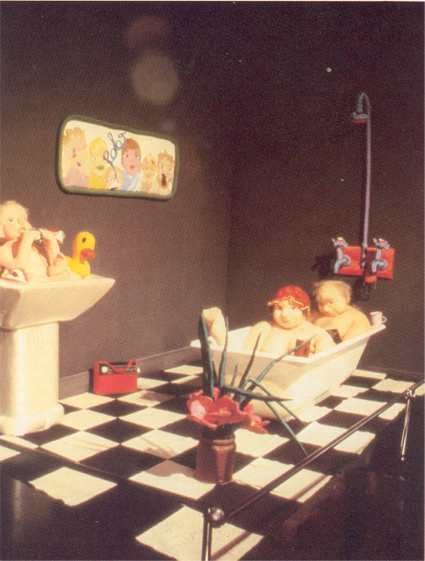 These comments are very telling: but the work self is even more revealing. However, make no mistake, this is a serious art and not to be dismissed as therapy. Its roots can be traced to the collective quilting of the Amish and Appalachian women, or the thatching, threading and decorating by African and North American Indian women. The Fabric Art Company work has its antecedents in the centuries-old cultural traditions and folk-lore of many countries. It springs from the things women have had to do to shelter and succour the family, and the things they did for recreation, as well as what they talked about, away from the men-folk.

Likewise, in a contemporary sense, it draws breath from the pathos of Eleanor Antin, the satire of Marisol, and the co-operative procedures of Judy Chicago.

Fabric Art is powerful stuff. Long after I stopped laughing I was still thinking about it. It is fun; it is also politics without rancour. In the words of one visitor to the exhibition, this was 'the funniest, saddest, most poignant exhibit I have ever seen'.

Photographs By Courtesy Of The Wellington City Art Gallery