Art, Walter Pater once remarked, reflects the 'perpetual weavings and unweavings' of ourselves, and amongst contemporary New Zealand artists there is none so adept at this projection of inner weavings and unweavings as Philip Trusttum. Of course we do not get the artist's life in particular, biographical detail, but rather his representations of a human life and its daily residues: celebrations of a life in which we all might share. Place Trusttum at random in any context of life - the begrimed corner of a garage, a route of walked streets, a house or garden with its quirks and idiosyncracies, a game (of chess, of tennis) - and the result will be an overflow of aesthetic exuberance, a response to the world in which he, and we, find ourselves.

The overflow in Trusttum's work has for many years expressed itself in a joyful lack of containment, no matter what the formal properties of his particular medium. There always seemed to be a spill over the edges, a sense of life's unconfined bigness. Most recently, this spillage found expression in the tiny scraps of goatskin paper which, like unpruned foliage, climbed and vined over the walls and ceilings of several New Zealand galleries and homes (including Trusttum's own home). 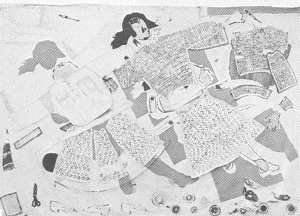 And yet in that mode of Trusttum's art there was, too, a sense of analytic dismantlement and reassembly of his passion. For his attachment to artistic overflow and spillage has, since at least 1980, had a ruminatively developing reaction-formation. The monochrome car-detail paintings dating from that time (and recently seen en masse during the Christchurch Arts Festival) exemplify the artist's determination to gain a closer focus and sharper figurational detail in his living through art. The result of this four-year exercise in dismantlement and reassembly is clearly evident in Trusttum's first major exhibition of 1984, Backhanded Portraits at the Bosshard Galleries in March. The huge works - there are four only - are, at first glance, characteristically Trusttum's in their natural exuberance. And yet there is marked difference. For in each of the works, Trusttum has found containment - perhaps contentment (though the pace of Trusttum's work is unlikely ever to find settlement) - in working within a clear frame. There is none of the former overspill: the images find a place wholly inside the figurational plane. There is, to be sure, no formal material frame, but there is a distinct surrounding geography of unelaborated, untouched surface. That is one difference. So too is the fact that in these works Trusttum seems uncharacteristically to eschew the animation - often the aggressivity of colour by which his works might formerly have been recognised.

But there remains a huge consistency in the exhibition. All four 'portraits' represent an immediacy of life: two, Lee's Uniform and Lee's Table constitute projections of a domestic, working cluster and clutter in the form of Lee Trusttum's creative enterprises with silk dressings; and two, Tim II and Tim III, are addressed, in title, to the generational style of a neighbour's young son. 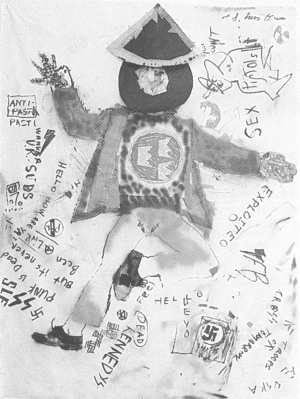 The Tim portraits constitute Trusttum's astute and benign observations of a set of New Zealand youth which seeks expression in the safety-pinned paraphernalia of punkhood and the urban jargon of graffiti. It is a curious mix of a rock-political-social-sexual rawness which leaps out of these works: literally leaps out, for Trusttum incorporates the real, pinned-together and stuck-on emblems of punk. The same approach occurs in the Lee portraits in the cut-outs and layerings: there are cut-out newspaper dress patterns pinned to the canvas, and then overlaid with cut-out and stitched replicas of the garments themselves, juxtaposed with scraps of the authentic material. If the earlier spillage tended to be over two-dimensional edges, the rich bigness of life now comes in multiple overlays.

As I observed in the context of Trusttum's 1980 retrospective mounted by the Sarjeant Gallery, the nervous velocity and change of directions in Trusttum's work over the years - even within given years - seems to leave many confused, or worse, about the artist's aesthetic continuity. But that is a lame and callow response. Certainly Trusttum's oeuvre - almost despite its successive accessibility - demands (and I hope will eventually receive) an extremely complex stylistic analysis: more complex, I believe, than would be pertinent to the work of any of his contemporaries. Perhaps that is because Trusttum is completely invulnerable in his work (if not in his artistic thinking) to transparent theoretical association or advocacy. But the complexity of the appropriate stylistic analysis should not induce a lack of trust. Trusting Trusttum, in the succeeding phases of his work, is, as art should be, a trusting to life.