Getting in touch with ancestors is a significant activity for many artists at the moment: an activity more to do with the content of the work than its style, although the use of images, motifs, pictorial signs and suggestions of faintly tribal, perhaps prehistoric connections, give many of these works a kind of identity as artefact. In local art over the last few years these suggestions, this vocabulary, has been variously employed by such artists as Paul Hartigan in his very contemporary neons, and Philippa Blair in her effectively exuberant cloak/tipi shapes. In a group of recent shows, James Ross refers to 'totems' and Carole Shepheard to 'female archetype images'; Bronwynne Cornish presents archetypes in materials which evoke prehistory as well as current times, and Andrew Bogle's manipulated rubbings often suggest aerial views of landscapes marked by monumental prehistoric structures.

James Ross and Carole Shepheard both expressed such intentions clearly; Ross spoke of art which works through colour, line and shape towards 'an archetypal Totemic end'; and Shepheard referred to a now conscious use of symbols which have long been part of her work, but which are now being used with an awareness of their function as ' female archetype images' - universal as well as personal. Both acknowledge that such image sources are however subject to the individual voice/vision of the artist.

In his most recent show at New Vision Gallery Ross has moved from those glimmering figural suggestions which hovered just behind the paint-skin in his works for the 7 Painters / The Eighties show. These new works are very material, involving a thick wooden structure with interlocking pieces fitted into cut-out sections. These pieces, which may be made up of several joined bits, are distinguished from the containing structure by colour, paint texture and brushstroke. In places the cut-out/insert will allow a view of a bit of the wall, where the fit is not snug: it adds a sense of depth and solidity and is rather sculptural. Paint is, a very important part of the total effect, but the works are not flat painted surfaces tied to the wall.

The interaction between the inset pieces, which are suggestive in shape (bones, a statue, or, in a more general way, contrasting sharp pointed and amply bulging forms), varies also: the containing structure can resemble a frame, a door or gate, a tight grave for a coffin shape ... something which confines and constricts as well as contains and protects.

In the drawings, this idea of containment is given a specifically human dimension: bones, muscles, organ-like forms which are in relative degrees contained with the skin/frame become a potential metaphor for the work of art with its similarly magical and mysterious life contained within the protective membrane of the painting.

The works refer in general and specific ways to ancient images (labyrinths and totems, Herms and Venus figures), some of which have reasonably clear associations while others exploit the inaccessibility which they imply. Ross's works, for all their intense and immediate appeal in terms of colour and shape, almost insist on a lengthier contemplation, a penetration of mystery.

Carole Shepheard's works at Denis Cohn Gallery were assembled into an exhibition which had elements of installation about V: although each piece had independent status, there was a strong sense of interaction. This, as well as the large scale of the pieces, is a break in the artist's previous pattern of smaller scale works using collage, and remaining firmly within the frame. These pieces, using unstretched and unframed canvas, freestanding wooden or bamboo structures or sculptural elements suggesting such symbols as pyramids, spears, skins, fully occupied, in fact seemed to elbow for room in the relatively small gallery. I'd like to see this show set up as an installation in a much bigger space. 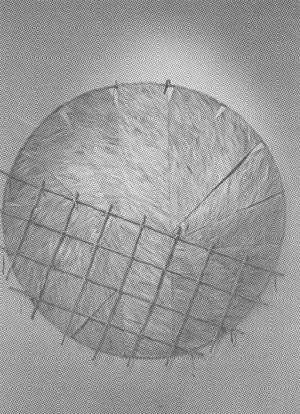 The stylistic extremes of the works were set, on the one hand by a vibrant Ritual Kimono, flat canvas bound together and adorned with vigorous brushstrokes suggesting movement, the flight of the show's title (and elsewhere, the movement of wind over foliage or light over water); and on the other by the delicately interwoven wooden lattices of the freestanding Temple Screen. In Offerings to Gaia the flat canvas enlivened by paintwork and the grid-like lattice came together to suggest themes of interaction with the physical world in tension within a spirituality which transcends the material.

Bronwynne Cornish dealt also with the relationship humans have with the earth, but was perhaps more fortunate in the space provided for her installation. The two works, (one made for an exhibition in the USA called Treasures from the Land, which includes works made solely from New Zealand materials), were set up in the foyer of the Auckland City Art Gallery, and their subdued colouring with stark white highlights, looked very striking against the, brown tiled floor. In The Great Migration, the artist has used a small group of images to suggest a time-scale for development, which is reinforced by the pyramidal lay-out from a group of rather primeval looking frogs at the apex, closest to the viewer, through a pair of Maori whares to some rather uncompromising European domestic structures at the base. The second work deals also with reflections on historical progression as seen through a combination of symbols from European and Maori culture: a spiral forms the basis of the lay-out, with two more European houses islanded, linked by a string of red-brown earthern-ware bowls/shells/boat shapes. The works are enigmatic, but in a very productive way: the images used are not restricted by obviousness or polemic and any implied contrasts between, say, an interaction with nature and an alienation from it, are subtle.

Andrew Bogle's works in his show Nature Walks at RKS Art used monochromatic frottage techniques not only to convey patterns and textures derived from his immediate environment, but also to explore (or make it possible for the viewer to explore) some more figurative associations suggested by those patterns. The connection which this technique has with the Surrealist movement legitimate such readings, perhaps, although certain titles (references to Rangitoto, for example) suggested that the seeing of a larger landscape in Bogle's renderings of particular pieces of earth wasn't all the product of my subconscious. 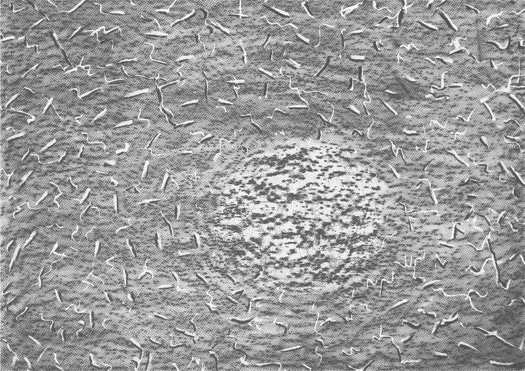 The combination of the textures and surfaces recorded by the more or less 'automatic' process of rubbing, with the consciously added lines, circles, indicators and focus points, looked like aerial views of landscapes: coastlines meeting seas, tracks and paths and (as subtle as James Ross's totemic suggestions) resemblances with prehistoric European landscapes seen from the air. Spirals, lines of palisades, circular forms like burial mounds evoke a landscape made symbolic. The fact that such formations can only be seen from the air, and are curiously more accessible to our twentieth century academic eyes than they were for those who made them, is a kind of comment on Bogle's detached style: almost passionless, recording without apparent involvement.

Also of interest in recent weeks was the Association of Women Artists' Multi-media show at Outreach: an event tied together very loosely by variety of materials used (in fact not very varied) and the insistence by the curator, Lois McIvor, on the non-political nature of much women's art. While acknowledging the truth of this, it meant for me that this show raised all my misgivings about the value of loosely connected group exhibitions. However, some works gave great pleasure: Merilyn Tweedle's unusual and very individual vision emerging in a pair of photograph based works featuring the artist as angel, and Linda Gill's subtle drawing One/Three with its interesting references to identity and role. Both works, with their acknowledgement of a unique experience, made the show as a whole seem perhaps impoverished by its insistence on some sort of neutrality.