Collecting Original Prints is a very useful handbook for anyone collecting, or contemplating beginning a collection, of contemporary original prints. In a straightforward manner, avoiding unnecessary technical jargon, it sets out to show that contemporary print collecting need not be as complicated as it may sometimes seem.

In her introduction, Rosemary Simmons clarifies the term original print: 'a work conceived and originated by the artist as a print'. Thus she excludes all 'prints' which are reproductions of another work in another medium, such as painting, and makes it clear that her definition encompasses handworked prints only.

Although the emphasis here is on contemporary prints, the development of printmaking is traced, from its roots in the second century A.D. in China, where rubbings from carved inscriptions are recorded; to the use of prints to illustrate books, and then to the beginning of prints in their own right as in the etchings of Dürer. 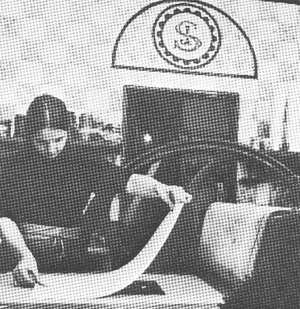 However it is in the section on 'How prints are made' that the book comes into its own. Printmaking methods are divided into four categories: relief printing, where the 'ink-holding image' is raised above the surface as in a linocut; intaglio, where the ink-holding image is below the surface as in an etching; lithography, where the image is held on the surface of the plate or stone; and screenprinting, where the ink is forced through stretched fabric, parts of which are sealed by a stencil. The many approaches to each method are examined in a straightforward way and the text is well supported by useful diagrams and excellent illustrations of contemporary printmakers' work.

Excellent examples are given to show the wide range of approaches within each method of printmaking and also indicate the variety of images and print type available to the contemporary collector.

There is a very useful section outlining the sequence of work in printmaking, covering proofing, editioning and cancelling, where the plate or block is defaced in some way to prevent further printing. The role of publishers and printers working in partnership with artists to produce editions is discussed and there is a section on where the collector can find prints to look at or purchase. Some useful points are also given about what information to ask for when buying a print.

Finally, there is a chapter on how to care for the works, covering methods of framing and storing.

Altogether this is a very thorough look at contemporary print collecting which the collector should find useful.