Prints and an Installation Double Doors

Collaborative art works in which a number of artists, usually women, work together on a single installation have become more common in recent years, and the 'collaboration' can take a variety of forms.

In America, Judy Chicago has followed the pattern of Renaissance masters who employed large numbers of Studio assistants. She has made two large installations, the Dinner Party and the Birth Project, with the help of many other women and men. Her working structure could be termed 'co-operative'; in other words Chicago has the ideas and her helpers co-operate with her in achieving them.

Another form of work, perhaps more truly collaborative, has been seen in Auckland in installations facilitated by Juliet Batten, who encourages the women working with her to make their own contributions to and decisions about the work as it takes shape. 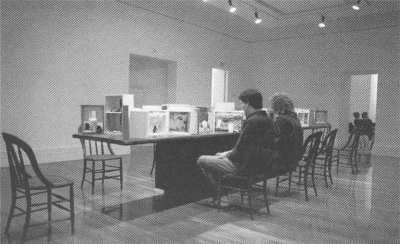 A third form of collaboration appeared for the first time here with Barbara Tuck and Gillian Chaplin's work Double Doors: an Artist in Focus exhibition at the Auckland City Art Gallery in August 1983. Chaplin and Tuck worked separately on the construction of a series of small, boxed assemblages. Each had been making boxes, unknown to the other, and when they discovered their similar concerns they decided to work towards a shared installation, and to keep in close contact with each other as the work progressed.

The resulting installation comprised about twenty boxes by each artist, set out in bays of three of four around the edge of a long narrow table. All the boxes were made to be viewed from the front, and chairs were set around the table. Both artists saw the table and chair installation as very important for the work; encouraging people to take their time looking into the boxes, and reinforcing a meditative and reflective mood.

Double Doors brings to mind the boxes made by the Dadaists and Surrealists, and particularly those of Joseph Cornell. Cornell's boxed assemblages appeal to the human liking for dolls-houses; miniature environments. (Children particularly enjoyed the Double Doors installation.) Victor Papanek wrote of Joseph Cornell's works, '. . . his little boxes, with strange and esoteric objects cunningly arranged therein are manageable small universes, perfect within themselves. . .'(1)

Many of the Double Doors boxes have the same quality of a 'cabinet de curiosité' as Cornell's works, and have similar contents: eggs, seashells, maps of the constellations, doll's heads, words cut from printed pages, butterfly wings, glass, mirrors, sticks, feathers, paint splashes, dead leaves, balls, nests, toy-like columns which become emblems of all architecture. There are also echoes of the American folk art of creating small constructions inside old bottles and of Charles Simond's carefully created miniature ruins - remnants of extinct civilizations of tiny people.

Yet Chaplin and Tuck's works differ from all of these in that they are undoubtedly personal as well as occasionally universal in their references. They communicate the artists' own experiences, ideas, hopes and memories, yet invite viewers to interpret them in their own way.

For both artists these boxes were their first use of assemblage. Chaplin is a photographer and Tuck a painter; and both of them used elements of their other work as key exhibits in their boxes. Tuck included small photographs of her own, unexhibited large paintings, placing them in a carefully structured context. Chaplin used photocopies of her earlier works as well as new polaroids, taken especially for the boxes.

Despite the combined exhibition and identical arrangement on the table, there could be no confusing of the artists' works. Gillian Chaplin's boxes are of uniform size, painted white inside and out. Most are glazed on the front; pristine, white, almost cubes. The objects inside them are primarily monochromatic, but her polaroid photographs glow with brilliant colour. Each of the boxes has a theme which makes connections between the disparate objects, although the boxes have no individual titles. The theme can vary for each viewer. In several of them her references are to the assuming or removing of outer layers, both physical and emotional; to the bandaging of bodies, the removing of veils, the shedding of skins, and to the vulnerability which is implicit in these actions. Chaplin photographs eggs with beautiful unbroken shells the egg of the philosopher: a symbol of perfection and an assertion of purity. But she also places real, broken shells in some boxes - something has broken out. Chaplin makes use of small, dead snakes and lizards, sometimes bending a snake so it swallows its own tail: a reference to eternity, the never - ending circle.

Gillian Chaplin's boxes are visual metaphors for human relationships, for her own past and present, for her view of the world; yet her touch is light and each viewer can bring their own experiences to the works.

Barbara Tuck's boxes are made from odd pieces of timber, sanded smooth, but unpainted add in varying shapes and sizes. Many are unglazed and their contents sometimes spill out on to the table. Her arrangements of objects are apparently haphazard, yet mysterious and compelling. Her fascination with language and words is apparent in several boxes; she uses strips of paper taken from books on linguistics which give common phrases in other languages with their English translation; communications from other cultures which make enigmatic 'labels' for arrangements of objects in the boxes. strips of paper torn from books emerge from folds of cloth; an apparently random collection of words.

She explores the character of paint; a pile of powdered pigment, a splash of colour, a photograph of dye being poured from a jug, a photograph of her own painting of women's heads, phrases: 'He paints my face', 'I paint his face'. Another box is lined with plaster-soaked cloth, inside it is a rock with a string tied to it; phrases surround the rock: 'he strikes me hard', 'he does not strike himself. Some of them seem almost to be altars, reverent arrangements of small everyday objects. Some have an architectural quality; two strong columns cannot quite contain a pile of beautiful, broken, empty eggshells or a mass of plastered cloth with a string tail which emerges from the box. An empathy with Chaplin's bandaged torsos is evident in Tuck's painted breasts confined by a diagonal wooden board. While some of Barbara Tuck's boxes are packed with colour and incident, others are quiet and still, with the illusion of infinity contained in a small and finite space.

Both Gillian Chaplin and Barbara Tuck found their work on Double Doors a rewarding experience. It was also rewarding for the many people who chose to spend time with the works, caught in their spell.