Bronwynne Cornish's Dedicated to the Kindness of Mothers

Dedicated to the Kindness of Mothers, Bronwynne Cornish's title for her installation, strikes at once a distinct emotional chord, suggests a definite dimension of feeling. To those more attuned to the bizarre, the subtly or quirkily humorous, the ironic in other works by Cornish, the very lack of irony indicated by the title gave some potential viewers' anticipation a vaguely uneasy edge. Surely Cornish hadn't abandoned her ability to coolly amuse and exercise intellect and aesthetic sense for a more direct - and to some embarrassing - demand on the emotions?

Experiencing the installation itself indicated that she had not paid off one approach in favour of another. Rather, what seemed particularly interesting and strong about this work was precisely Cornish's ability to fuel her undoubted imaginative and formally inventive skills, her particular wit, with an undeniably rich texture of feeling. 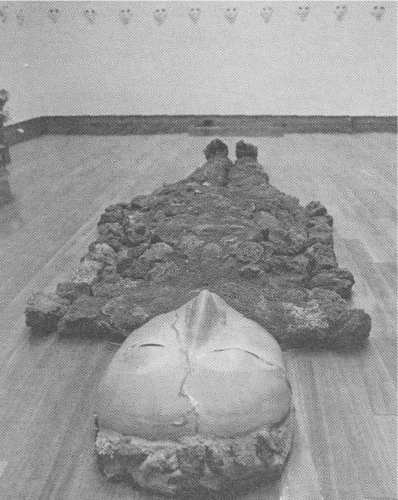 Situated off the West Gallery in a small area, Cornish's work consisted of three major elements which, with lighting, combined to produce a strongly ritualistic atmosphere and transformed the bright white space into a kind of high-tech cave. The central element was the floor piece, the horizontal, roughly described figure of a giant-size woman formed out of local Three Kings basalt. Her head, by contrast crisply imaged in fired clay, was clearly the focus of the work, and was given an added intensity and animation by a strong shaft of light. The supporting elements were three urns, cast, looking vaguely like Iron Age artifacts, which were replenished periodically with fresh arrangements of flowers, grasses, leaves, and fifty-two clay masks of skulls encircling the surrounding walls like eerie guardian spirits. This central focus with attendant objects placed in a manner which used symmetry and repetition has characterised other recent work by Cornish: her Subterranean Desert (1980) and her Home is where the Heart is (1982). Like the pegs and sphinxes in these pieces, her skulls - obsessively multiplied, each one a kind of replica of an actual skull and a close but not identical replica of others in the set - suggest both the repetitions of domesticity and also the often essential and effective repetitions of religious ritual. They are also very much about Cornish's concern as a sculptor with processes of reproduction and notions of representation, as well as illusion - witness in the display of supporting material the real ventifact and her ceramic ventifact box, the small carved wooden turtle made by her grandfather which she describes as a 'replica' of the original animal owned by him.

The whole installation evidently, and as Cornish says, hinges on the face. It's an odd face - comically big nose, curiously curved mouth - not naturalistic, not altogether stylised, nor idealized. Nor is it comical, but a very Cornish mix of all these, which effectively draws viewers back to it, surprises - and baffles. 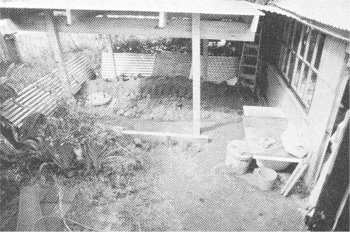 The rock - lined mould at the artist's studio

Although she is obviously concerned with aspects of the Prehistoric and with ritual and magic (a concern which places the work in the context of an international stream of recent and current art-making) the effectiveness of Cornish's piece, for me, lies in her ability to make the work speak in the present, The baffling animation of the face does this as much as anything: but also crucial are Cornish's aesthetically rigorous selection and organisation of her component parts an importantly (although an alternative to a original idea) her use of the magenta - pink neon lights, which cast their hazy glow from floor level up over the skulls. This characteristically modern lighting form creates the necessary tension with the other elements of the piece and makes for an effective dialog with the minimalist style of the gallery space.

As a ritualistic work with a retrospective emphasis, dedicated to generations of the past, the concept is immediately suggestive of the Maori notion of whakapapa. This is recognised by Cornish. It is an area little explored in depth by contemporary artists, however unless you count the frequent occurrence of the skull as motif in some New Image and Neo-Expressionist work. The, more enquiring, positive attitude to death which this installation attempts to convey by various means (including the pink lighting, the curiously animated, smiling face) is shared, interestingly, by some feminist artists: Wendy Miller and collaborators' Death Rites (San Francisco, mid 1970's), Juliet Batten's Deathbed (Lifescape installation, Auckland, 1982). As a kind of Earth Mother Goddess figure, the image of the woman also has obvious associations with that strand of Feminist art which focuses on Goddess imagery, on icons of the Feminine Principle. 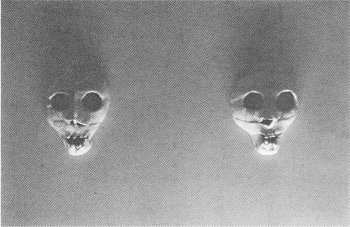 The notion of a woman artist fashioning with rocks and clay an image of a woman has certain reverberations for me. in the cultures of Antiquity and Christianity a male deity has been designated creator of 'man', a clay figure: Prometheus fashioning mortal man, God creating Adam (in His own image). It's rather interesting to see at this particular time a complementary version of that process, using similar basic materials, plus Cornish's oddly appropriate - and technically difficult - method of casting which she described as 'in reverse, or inside out', the method of construction making direct use of a 'female' mould, in fact.

Cornish commented approvingly on some of the connections set up by the conjunction of the British travelling exhibition Fabric and Form with her piece in its adjacent gallery space. A desire to transcend boundaries extend traditional limitations of certain media and values attached to them, characterises her work as it did the pieces in that show. For me, on my most recent visit to Cornish's installation, another set of interesting connections were suggested by certain works in the Recent Acquisitions show: those that focused on images of women. Claudia Pond Eyley's Shield for Ancient Mothers was a work which, like Cornish's, suggested an attitude of homage and continuity with women of the past. Emily Pace's Coming Through imaged the symbolic, schematic outlines of a woman's figure, recalling Maori ancestor figures in Poupou carvings. Jacqueline Fahey's Final Domestic Exposé, 'I paint Myself' depicted herself nude, swamped by domestic clutter, mocking the notion of idealised beauty and the calmly erotic surroundings of the traditional reclining female nude. Intentionally or not, each of these works, Cornish's included, effectively deconstruct dominant modes for the representation of women in our culture and construct varying new meanings.

Certainly this is but one aspect of Cornish's installation. A strength of Cornish's is that, while aspects of her work are keyed in with various contemporary artistic concerns, her statements remain steadfastly her own. In this installation the old sense of the bizarre, the ingenious handling of her media, are combined and enriched by a more ambitious scale and a new emotional depth.