In The Light Of The Past - Stained Glass Windows in New Zealand Houses by Jock Phillips and Chris Maclean Published by Oxford, Auckland, 1983.

Both of these books are the result of enthusiastic research by their writers. They add significantly to the growing body of literature which is designed to open our eyes to what is distinctively New Zealand but which could easily be neglected. Some of their territory has been anticipated in Robin Morrison's traverses, especially those through the South Island, and by the many writers who have put together books about New Zealand's country houses or their urban equivalents.'

Many of these were hit-and-miss affairs, usually illustrated with conventional little drawn images, the quality of which barely encouraged the reader to visit the places mentioned, let alone read on. These two books are carefully thought out, and, especially in the case of In The Light of the Past, represent significant attempts to come to grips with gradual changes in style and taste. 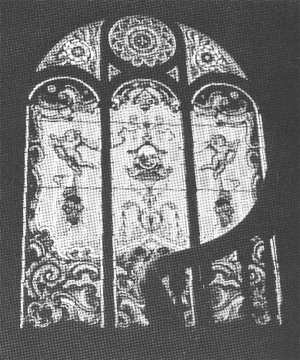 Phillips and Maclean have gone to great lengths to be accurate about the processes involved in making coloured glass. They have found the original glassworkers and discussed their methods; they have established regional differences in styles - all beautifully illustrated in generous full colour photographs. Their chapters on Art Deco and Art Nouveau avoid the repetition of the usual tiring cliché about these styles.

However, in two significant areas their book is extremely annoying. It begins with a chapter called On the Road which establishes a relentless first-person plural pronoun based style that by the end of the book has come to seem gushingly autobiographical. It is unfortunate that the reader must wade through their personal reminiscences of the dynamics of the quest: they make it abundantly clear that the Remuera homeowners were frosty, their dogs savage and their windows disappointing. But the Grey Lynn Samoan woman, after initial suspicion of the palagi intruders, opened both her heart and her, of course, magnificent windows to them.

Equally irrelevant is their insistence on showing their disapproval of the display aspect of Victorian and Edwardian domestic architecture and the society that produced it. The 'Elite' (this word resounds through the book) 'compete to outdo their neighbours' and live in 'large ostentatious villas with their stained glass'. None of this disapproving terminology is used in the chapter about Art Deco in the 'thirties. Were not the small bungalow owners in places like Hamilton also vying to see who could have the largest sandblasted leaping stag on their front door? 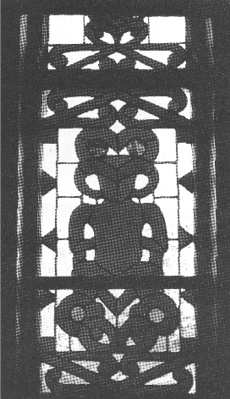 All the coloured glass work was for display purposes, but the Edwardians seem to these authors to deserve reprimand for theirs. The photograph of the vulgarly painted 1904 Devine House in Wellington's Terrace merely serves to slant their argument whereas other more restrained paint jobs could easily have been included.

It is sad too that this book on New Zealand's stained glass remains seriously incomplete because its authors did not include any of the magnificent Frank Lloyd Wright-inspired windows designed by A. J. Louis Hay in Napier.

Corrugated Iron in New Zealand is the work of four authors who have each been involved in the subject for ten years. Geoff Chapple contributes a toughish introduction entitied 'The Unremitting Ripple' which is written in a style which abounds in imperatives, contracted verbs and other conversational devices. He places iron in its literary and artistic context while architect David Mitchell contributes an essay entitled 'Dunnies should be made of tin' which gives all the technical details of its manufacture, the effect of paint upon iron, the difficulty of cutting it and the extreme dangers of hammering it. 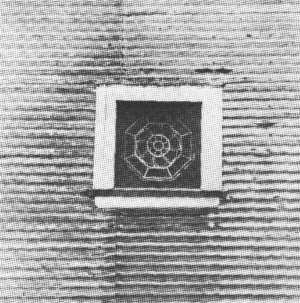 Facade - Wellington - the meeting of stained glass and tin

The rest of the book is made up of photographs of dubious quality. Too many show unmistakable signs of having been printed from dirty or scratched negatives. There are some very crude examples of burning in to obtain darker tones. Worst of all, many of the photographs have been printed with insufficient contrast so that often not even the distinctive striations of the iron are clearly visible. Hazy focus is also it problem.

It is a pity that a book so carefully designed to reflect the silver of corrugated iron and consequently to omit all reference to the distinctive colours of its decay should fail in terms of its black-and-white photography. But readers will be amazed at the variety of uses to which 'tin' has been put. 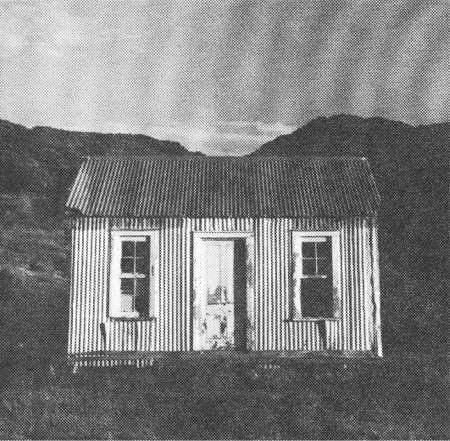