The New Zealand Academy of Fine Arts has always aspired to be something more than just another art society. Its somewhat grandiose title was not assumed until 1889: but, as the Fine Arts Association of New Zealand, it had been founded in 1882. Over its one-hundred-year history the Academy has aimed at a national not a regional role in the arts, and has functioned as a teaching as well as an exhibiting society. Its recent centenary has provided the occasion for a full history, titled Portrait of a Century, by Tony Eden and Robin Kay. They have compiled the most thorough and well-illustrated account of any New Zealand art society yet published. 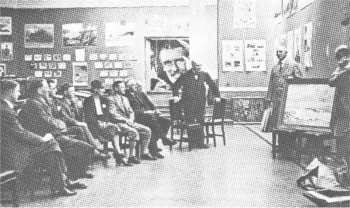 Selection of works for the Acadamy's 1937 Annual Exhibition

The man most influential on its formation was C.D. Barraud (1882 - 1897) - himself a practising artist and the first president. From humble beginnings, the Academy moved into its first permanent home in Whitmore St in 1892. These premises served as a gallery and classrooms until the opening of the Buckle St complex in 1936. In its early years the Academy had its share of problems, including its first secretary, who had to resign because he had helped himself to members' subscription funds. The Academy was fortunate in attracting the membership of artists such as J.M. Nairn and Petrus van der Velden. Nairn became vice-president and also introduced his style of lively plein-airism to the Academy's shows. Unfortunately, Van de Velden was one of the first to have a painting rejected for hanging at one of the exhibitions because of 'lack of finish'.

Within a few years the Academy's shows became noted for their sameness and mediocrity. As the writers state frankly: 'Exhibitions came and went, the paintings in any one year looking remarkably like those of any other'. The Academy did build up a useful collection of paintings, many by New Zealand artists, during the nineteen-twenties and nineteen-thirties. This collection was made as a substantial gift to the National Art Gallery when it was formed. In addition to its patronage of art, the Academy also arranged for exhibitions of British art to be shown in the capital. One such showing was of the paintings of Lamorna Birch, an English landscapist. Most of the shows were conservative and did less than they might have to improve New Zealanders' knowledge of contemporary painting in Europe. The authors record an entertaining incident in the nineteen-thirties when Mr Murray Fuller, the organiser of a show of British painting, discovered that his paintings had been lost in a shipwreck and were being washed up along the coast. Undeterred he went out and salvaged as many as possible, including a nude that had so offended a farmer's wife she had thrown it in a creek. 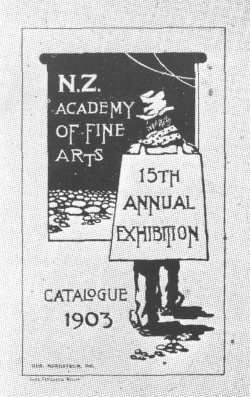 Because of the extensive scope of this book it is impossible to do more than indicate its range. The text is set-out chronologically and is based on a careful study of the Academy's records. A valuable aspect of the book is the complete list of exhibitors over its entire history. It is extensively illustrated with both black-and-white and colour plates. The text is lively and the whole production a worthwhile contribution to the social history of art and patronage in New Zealand.

(Portrait of a Century can be obtained directly from the Millwood Press, 291b Tinakori Road, Wellington 1.)