The art of kite making and flying played an important role in the lifestyles of the ancient Maoris. Their manufacture was a sacred and time-consuming affair, for, according to tradition, only a tohunga (priest) of some standing in the tribe could prepare them. No food could be eaten during their construction, and their final flight was the sole responsibility of the tohunga or of other prominent tribal figures. It is interesting to note that while the flying of sacred kites was a man's occupation, inferior, smaller kites were built for the amusement of children, and that the deities personified by the kites could be of either sex. The larger, sacred kites were constructed according to strict rules and procedures which were passed down from generation to generation. Whether they were designed in the images of birds, men, gods or heroes, the features and scale of the kites also related to exact guidelines.

Certain Maori legends indicate that kites were the direct descendents of the god of birds. The legends themselves are punctuated with exploits of warriors and priests enlisting the services of giant kites in order to escape from opposing armies, or bringing good luck to tribal activities. Historically, kite flying was known prior to 1600 AD, having filtered slowly through the islands of the South Pacific from China. The close association of kites with birds is seen through the use of the word manu to describe both. Other Maori names for kites are kahu (hawk), and manu pakau (bird's wing), Even the act of kite flying (manu tukutuku) means 'bird played out on cord'.

Very few examples of ancient Maori kites remain today, for it seems that prior to the late 1800s these indigenous artifacts were not deemed worthy of collecting, except for the sociological purposes of studying ancient Maori pastimes. However, a sacred kite (housed in the Auckland Museum) illustrates the ancient construction processes. Though this kite was made relatively late, being a present for Sir George Grey from a group of East Coast natives, it has nevertheless deteriorated considerably. Elsdon Best in his Games and Pastimes of the Maori (Dominion Museum Bulletin, No.8, 1925) describes its physical dimensions as follows:
Its breadth across the wings is about twelve feet, the wings being widest in the middle of the kite, where they measure 12 inches or 14 inches, but only about 5 inches at their extremities. The framework of these wings is composed of twelve small, light wooden rods arranged lengthwise, the two outer ones being the largest. Across these, at right angles, are lashed short, light wands of twigs, arranged in series of six each, with a space of two inches or so between each two series. The body framework is made in the same manner, and is about seven inches wide near the wings, increasing in width downwards to about fourteen inches at the base. The frame is covered with leaves of the raupo or bullrush, arranged longitudinally and each leaf tied on to the frame. 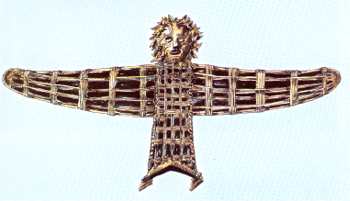 The kite was constructed to resemble a bird, and mounted upon the frame was a human head form. Though the facial features of this kite were decorated over a skin of European cloth, the original kites were carved and elaborated with dog-hair, feathers, horns, points, leaves, and shells.. The wings of these giant bird kites were flexible and while flying presented a flapping or swinging movement. Streamers of flax and feathers also attributed a kinetic sense to its flight. Systems of cockle shells were fastened to the kites and these produced a rattling noise. Another accessory to the ancient Maori kites was a karere, or messenger, which was made of lightweight materials. This was sent up along the cord towards the kite, its purpose being to send messages, appeals, or gossip to the gods. Children learned chants to recite in order to assist their karere's ascent, and sacred enchantments were continuously recited by priests when flying divine or war kites.

The movement of a kite while flying was closely watched. Its spins, dips, and turns were important, for these aerial manouvres represented events in upcoming battles or activities of the tribe.

The smaller inferior kites built for children were constructed of easily accessible materials such as flax and bull rushes. The kites had no tails as we know them today, and the cords for the children's kites were fashioned from strips of flax tied with knots. The adults' kite cords were made of stronger material as some of the larger kites had wingspans of over twelve feet, being capable (some theorists believe) of actually lifting men.

The kites built by the ancient Maori mirrored the physical appearances of their subjects, and were given an added mystical significance. These kites not only imitated birds, men, or gods, but became separate entities of their own. They were attempts to alter universal powers, to induce mysterious wills of good and evil spirits. They evoked the supernatural powers indicative of the Maori lifeforce and associations with animals, birds, and the dream of flight. Used as communication devices to their gods, Maori kites became a link with the great natural powers which ruled their life.

As artifacts these kites are interesting for their graceful form, tactile qualities, and primitive inventiveness. The examples here and in England indicate that visually articulate craftsmen were employed in their creation, and like most Maori artifacts, they are imbued with the characteristic traits of flowing patterning, carving, and decoration. The ancient Maori kites can be looked upon both as functional kites and as significant examples of Polynesian sculpture.