Rita Angus
Impressions by some friends

Rita Angus in association with such artists as Colin McCahon and Toss Woollaston established a tradition in painting which has persisted, and which has profoundly influenced the course of modern New Zealand art. Her talent, her pioneering of new directions in painting, and her involvement with other artists associated with the Christchurch 'Group', helped to redirect and reinterpret artistic attirudes concerning the depiction of nature. Some of her paintings are already considered indigenous masterpieces.

Born in Hastings, Rita Angus began her artistic training in the disciplines of drawing and painting at the Palmerston North Technical School: and from 1927 to 1931 attended diploma classes at the Canterbury School of Art. It was here that she was to formalise artistic traits and establish lasting friendships with fellow artists and writers.

In 1958, Rita Angus travelled to England and the Continent with the assistance of a travel grant. There, within the major museums and amongst old masters such as Giotto, Masaccio and Fra Angelico, Angus reaffirmed her searching toward the control of tonality and colour.

Rita Angus's style complemented, in colour and line, the isolated, stark mountains - the dry vastness of atmosphere in the South Island. In order to capture this sense of vastness she intentionally depersonalised her landscapes, muting a bright palette in favour of more sober tones.

In her painting Cass Angus developed a flatness and simplicity loosely based upon Cézanne's principles of redirecting nature into geometric forms. The self-contained areas of colour dissect the picture plane, and build upthe entire composition by the interrelationships of various parts. Her primitive abstraction of nuances and structural components in the more classical sense of landscape also reinforced her ideas of the isolation of a sparsely inhabited terrain, and contributed toward pictorially establishing the quiet and provincial lifestyles of rural New Zealand - lifestyles dominated by nature, where an old railroad station, fences, machinery, retain the same weather-worn significance as the ageless mountains which surround them. 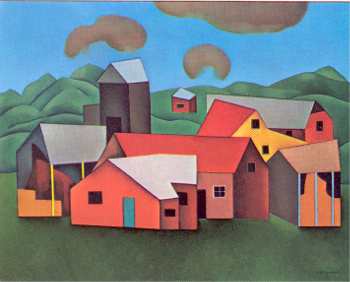 Rita Angus's landscapes, with their acute focussing of atmosphere, seem familiar - yet remain distant and untouchable. Their simplification and their philosophical associations make them general ideas of place rather than any specific reference to a particular location.

Rita Angus's portraits and figure paintings seem to have been influenced by several schools of thought. Her Portrait of Betty Curnow is surely one of New Zealand's most important paintings. Apparent in the portrait is a basic frontal aspect which has something Egyptian about it. The hypnotic, sharply-focussed features of the sitter's face show similarities to Byzantine portraits. Angus has again simplified, or attempted to reduce to its essentials, the human form in order to convey the emotional build-up of the subject. The portrait pose is centrally placed and restful and the painting becomes more than just a likeness of a friend. The human form is executed with the same timelessness and sculptural qualities seen within her landscapes. Throughout the background are scattered personal belongings and articles which assist the viewer in forming the composite internal portrait. The sitter's eyes reflect both patience and a feeling for the enjoyment of life and work which is echoed by the small Bruegel reproduction painted hanging behind the subject.

Rita Angus's paintings were the result of long and tireless observation. It was not uncommon for her to work for years upon one painting, continually building up and revitalising areas, rarely satisfied until the entire composition was of one feeling and consistency. It was out of this patience and dedication that she created some of the finest works yet painted by a native New Zealander.