Rita Angus Impressions by some friends

I first came across the work of Rita Angus in Christchurch about 1930 - a painting I can bring back to my mind's eye forty years later, a painting of a little hill at Waikari in North Canterbury.

Rita Angus was trained at the Canterbury School of Art. The paintings to be seen in those days at the annual Society of Arts shows were much of a muchness, year in, year out: brass bowls of marigolds, sandy foothills at New Brighton, a bend in the Waimakiriri River; such scenes duly found their way into Christchurch drawing rooms. But lively students existed then, as they do today. Ngaio Marsh, Eve Polson, Rhona Haszard, Ronald MacKenzie, Rita Angus, were very much a Christchurch set-up unto themselves. Some got away to Europe, some stayed. Rita Angus, a lively student herself, married one of them, Alf Cook, a talented painter, brother to the painter James Cook. Rita's marriage to Alf Cook didn't last long and she was thrown on her own resources. 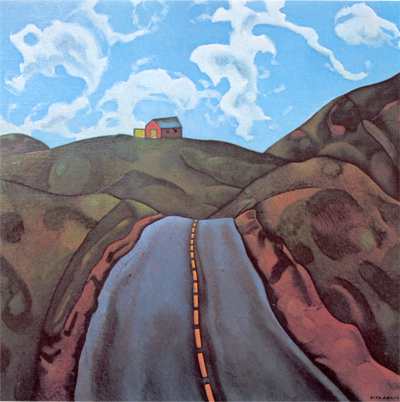 I knew her in those days only slightly, enough to say 'Hello' to at a group show, but enough to look out for her work each year and to recognise it. This is fun when you are starting, as I was, to look at paintings. Rita's cool eye turned toward those hills at Waikari was already independent. She was setting down what she saw without any School-of-Art notions of what she should see. In the 'thirties Rita painted some remarkable landscapes in the Canterbury back country around Springfield, Cass and Castle Hill. They were something new in New Zealand painting: compared with the scenes being churned out at the Society of Arts shows they were non-paintings: spare, painted as though with a stylus instead of a brush. But they set down unmistakably the Canterbury scene. There is not a human figure in sight: the paintings declare the emptiness and loneliness of these places. The best of them were selling for ten or fifteen guineas, and they remained unsold for years.

At that time she was friendly with Allen and Betty Curnow, Lawrence Baigent, Leo Bensemann, Douglas Lilburn, Colin McCahon, Toss Woollaston; and in these years too she painted a series of tiny paintings, landscapes in North Canterbury, single flowers in a vase. Then came the astonishing portrait of Betty Curnow that is now in the Auckland Art Gallery. The tiny landscapes are delicately touched: the flowers have a chalice-like quality about them: the portrait is one of the most remarkable portraits painted in New Zealand, done in her own flat style, the lines sharply defined, the act of painting seemingly reduced to a bare minimum. It is more than a portrait. It is a revelation of the subject, and one wonders what Rita Angus's sitters feel about these portrayals. There is something hypnotic, trance-like even, about such work. Rita would spend three years over a painting, slowly building it up section by section, patiently applying her pure colours.

From what cause I do not know, ill-health overtook her, at times involving a painful withdrawal from the world. For a time she lived in Northland (I mean by that the Kaitaia region), and I recall her telling me how happy she felt up there in this completely friendly society, doors unlocked, no fences to the houses, people dropping in, trees laden with fruits and flowers new to her, a sense of sunshine freely flooding down. She then came to Wellington, to Sydney Street, to a hidden house with a magnolia tree, one of those places that could turn up in a story by Walter de la Mare or Alain Fournier. There was a touch of magic about it, mystery even, as though one day you could go and it wouldn't be there. Here Rita Angus, in addition to her few portraits and landscapes embarked on a series of what one can only describe as allegorical paintings. The most remarkable of these is an evocation of the countryside around Queenstown: it is filled with golden light, and if such a landscape does not exist, then it should. I own myself a tiny painting of a London scene, houses across the road from a room she would have lived in. The time of day is twilight: the sky is real, as one finds in a surreal painting by Magritte. It is the surreal light that suffuses the Queenstown landscape and gives it its magical quality. It was the only painting reproduced in the London Times ten years ago from a show of New Zealand paintings. 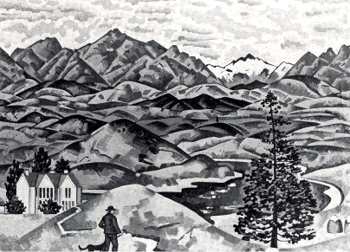 A strange painting from recent years had its beginnings in visits she had to make to Wellington Public Hospital. Again there was her flat statement of our comical little Wellington buildings, a bus-driver's steering wheel, and an odd sense of something askew? Menacing? One doesn't know how to put it. The painting was sent to the New Zealand Academy of Arts for showing, and believe it or not, was rejected. Their standards were so high that not even Rita Angus's name permitted the entry of a difficult painting. When one considers the coarseness, the vulgarity of what the New Zealand Academy did accept, one is not surprised that Rita was wounded by this rejection. (She was always quick to defend the work of any artist who she thought was not receiving proper attention, and whose work she thought was being snubbed. In this respect she was most generous and loyal.)

I had been deputed as one of a small committee to call on Rita, to ask her whether she would consent to having some of her paintings shown in London at an exhibition of contemporary painting. I kept putting this off: but on my way home one dark wintry evening (it had been raining) I made my way up the dark rain-sodden path past the magnolia tree to the Sydney Street house. All was in darkness. What a relief! She wasn't in, and I was not sure how I'd be received, but I had to knock. A light appeared somewhere as though of a candle; the door opened an inch or two; Rita, more than ever like a De La Tour figure, stood framed. Long pause. . . then 'come in.' I was sat down, the air was absolutely still, I explained my mission; by luck (mine, not Rita's) I had come on the day she had received that rejection from the Academy. Somehow all went well: she showed me the beginnings of a lively Island Bay landscape, and a marvellous one of a family. She was happy to send work to London, and the London show duly appeared. Then the blow fell. A long letter came to me from Rita. A work of hers had been reproduced in the London Times without her permission; it was a travesty: who did I think I was that I should allow all principles of decency to be betrayed? I was odious, I knew nothing of painting, I was just a clever fidget. The letter, a long one, was venomous, and I did the best thing, dropped it in the fire; and what with varying circumstances we did not immediately meet again. I was comforted by two friends who asked me if I had received a letter from Rita. 'Don't worry: we've all had them at one stage or another.' As in her portraiture, her landscapes even, Rita let no-one off. Her knife-edge  sharpness was part of her and in this episode she was genuinely upset and I happened to be there to be shot down. There was never any animosity in her strange reticent work; nor was there ever any sludge.

Paul Olds arranged a small show of her work in the Victoria University Library the year before she died a dozen pictures in all. What integrity was shown there, what clarity of statement. It will be hard now to see Rita's work, for she did not paint for galleries. She would have abhorred the new world coming up where only the best people with money-bags can buy. She told me once she painted small paintings because she wanted them to go into ordinary-sized homes to be lived with. I find in her work and in her life a resemblance to another quiet person, Gwen John. Occasionally people turn up with a saint-like devotion to quietness. In 'Godzone' such artists don't have it easy: partly they've made the choice of a hard way.

I have a happy memory of her in London. We had met one afternoon at the I.C.A. the Institute of Contemporary Arts to see a show of way-out painting the kind of painting where the painter has slashed his painting, beautifully, with a knife, or has apparently sprayed the canvas with machine-gun bullets, or embedded semi-precious stones into the surface. We had the gallery to ourselves. We made what we could of this show and came down on to the corner where Duke Street meets Piccadilly. Dusk had fallen, the lights had come on, it was the violet hour. Whether or not it was that our eyes had been made to work, or had merely been refreshed, we both looked at the entrancing scene about us and both bubbled over into laughter. What were we laughing at?