After eight years in dealership—six of these on her own account—a chance visit to a landscaping display in 1980 gave Janne Legard Land the opportunity she sought to establish her career on a sounder basis. One flight up over a fruit and vegetable market, this display was held in Art Space, photographer-chef Trevor Ulyatt's cavernous Allen Street studio.

Land saw that this studio (twelve metres long and eight wide) had the potential for conversion into a gallery capacious enough to show large art works without space constraints. After securing a lease, the Janne Land Gallery opened on 26 April, 1981. The studio was painted pristine white, four-walled and sky lit. The entrance was through Magic Theatre doors, a commissioned work by Phil Clairmont.

Janne Land had begun on the periphery with art classes under Elva Bett in 1968. She served an administrative 'apprenticeship' with Peter McLeavey, and, when the opportunity arose in 1977, became first director of Galerie Legard in Kelburn. Interspersed were travels to Copenhagen, her home town, to Europe and Britain.

Land's first concern has been for showing modern, contemporary New Zealand works. `I have to be happy with what I show,' she says. `By that I mean that not only do works have to have content, they have to be original and have aesthetic beauty. Not only must they capture my interest, they have to hold it.' 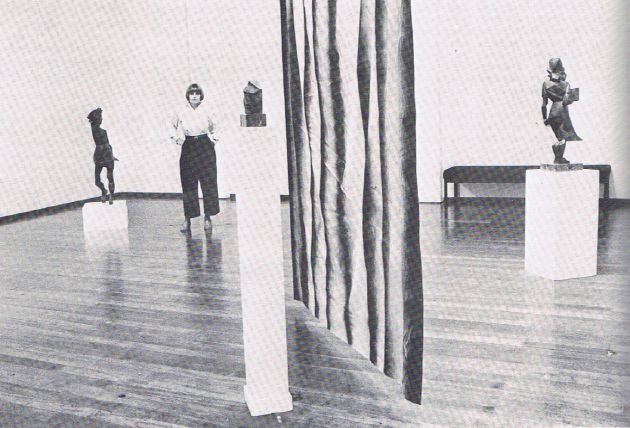 Clients aside, Land says the success of a dealership is keyed on a solid relationship with artists, which embodies a personal rapport and mutual respect. 'I believe in what they do—they have to believe in what I do,' she says.

Newcomers have had their opportunities. Painters Jane Zusters and Terrence Handscomb, talented and young, were exhibited for the first time in Wellington this winter.

Land was pleased, when the gallery displayed its physical versatility with Term Stringer's Museum Corridor show this spring. Stringer hung five-metre charcoal banners across the gallery. Viewers were steered past his sculptures by this device which lent intimacy to his works in the restructured space.

In a city where galleries of all kind abound, Land's has won a reputation for the consistency of its standards. Land says feed-back from patrons and artists is that the shows are of interest and exciting. 'That is what makes it for me, too,' she says.