MAORI is both artistically pleasing and professionally put together, with very few spelling errors (I found two), the use of high quality paper and stitched hardback cover, photographs well-reproduced with sharp clarity from old prints and an excellent layout of text and visual material. And yet, it is a book of confusing and varying character.

The smooth, glossy dust-jacket has on the front a full-size black-and-white photo of Koroniti Pa in 1885 serving as the backdrop for the title and author's name, printed in bright red. The short title MAORI in red covers the spine, and above the publisher's name (also in red) on the back is a reduced squared-off-in-red photo of the dawn sentry post of Bastion Point in 1977—also a black-and-white photograph. Given that the dimensions of MAORI are larger than normal it would be easy to infer that it is a glossy coffee table book. This would be wrong on two counts. Firstly, the contents belie this. Secondly, any person with a slight knowledge of Maori concepts will not place MAORI anywhere associated with food lest the tapu and mana of those photographed are affected.

In contrast to the cover the rest of the book is in sombre black-and-white. This is unfortunate, for such a colour scheme depersonalises Maori faces and also enhances identification problems. Only the author and publisher would know why colour photographs of more recent events and people were not included. Given the present-day emphasis on natural and discordant hues in fashion and hair styles, and similar colours in photography, television micro-processors and books, MAORI seems dated by comparison. 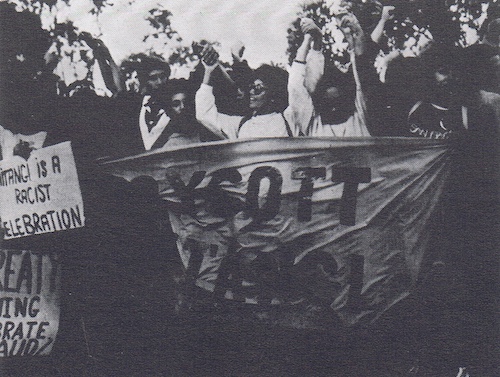 A closer examination of the contents would identify MAORI as having an academic format, with its chronology of title page, table of contents, preface (renamed author's notes), introduction, chapters, tribal map, sources and acknowledgements, and index. The photographs are clustered together 'arranged thematically in chronological sections'; they are part of the exposition of history of Maori people. But in sense this method fails because our history goes beyond the thousand or so years in this country. Michael King takes us into the period before Time began when the mythical children of Sky and Earth created the world: but photography of Maori people dates only from the last 180 years. These relatively recent records have other implications; all those shown—including the pathetic dried head—are victims of colonialism and of white choices and controls. The information on them has now been filtered through a white mind. In no sense can any be singled out as totally Maori.

There are some four hundred photographs. While they cover Maori Aotearoa and are from libraries, institutions, private and commercial collections, they represent a minute fraction of what is available. Michael King provides good documentary insights and analyses of Maori people in photography and this should be required reading for all photographers and artists. But his knowledge has not been tempered by caution, care or sensitivity in choosing photographs for publication. David Simmons (New Zealand Herald, 22 October 1983) pinpoints several inaccuracies. Keri Kaa (New Zealand Listener 24 September, 1983) refers to the photographs of tupapaku (corpses) as most disturbing. I and my kinsfolk are deeply grieved and angered that our dead relatives of Hokianga have been exposed for all to see. The reviewers mentioned above have covered some matters of concern. The Introduction encapsulates what is objectionable to many Maori people. Everything antithetical to Maori feelings—from bared bosoms, coon humour, washday at the pa, corpses, to the dried head cruelly mistreated by English aristocracy and now decently interred—all have been shown in the thematic photographic jumble of the Introduction. The theme allowed for coverage of whatever Michael King saw as relevant. What was chosen challenges Maori sensitivities, reopens old hurts, and sensationalises what has been condemned in recent times. The deep disquiet of many Maori people at having Pakeha researchers probing for and intruding on our sacred, cultural or emotional worlds is reaching a peak: the insistence that such research must be by trained Maori people, or guided by Maori people, or not be done at all owes much to past experiences. What appears in MAORI does not lessen the disquiet or quieten the insistence.

I found the flow of history chapters adequate and satisfying but felt that the promises of the dust-jacket were empty and absurd. 'This book, text and photographs, is the most comprehensive history of the Maori people yet published' it stated. No single book can comprehensively encompass some one thousand years of existence and in no sense does this book even come to terms with the history, heroes and heroines of my subtribe or tribe, let alone those of some five hundred others. As for the 'startling conclusions of contemporary scholarship', current research of Maori manuscripts, settlement traditions and genealogies showing that the hapu is not a crucial residential unit, is not recognised in MAORI. The new evidence on the origins of Polynesian peoples is in fact some years old while Michael King's own contention that 'this book constitutes a wider overview of Maori life and race relations in New Zealand than any published previously' almost has a Muhammad Ali 'I am the greatest: ring to it. Any book dealing with Maori people cannot do justice to race relations or racism. Only a study of Pakeha people, their society, history and mores can, because only those who control resources and have power can control race relations and be effective racists.

As for wider overview of Maori life, Michael King is no Anne Salmond. This is not being disparaging; the former is a social historian and the latter a social anthropologist, and when Michael King strays into anthropological territory his comments are ingenuous. 'Traditional garments . . . had been time consuming to prepare and had not provided satisfactory protection and warmth' (p.74) as a rationale for using blankets, is a strange comment since such garments did provide protection and warmth before European arrival. 'Some people practice Christian and Maori religions simultaneously . . . most Waikato Maoris . . . were both followers of Pai Marire and baptised Methodists' (p.77) is also a curious judgement: firstly because Pai Marire is a Christian religion, and secondly because any Maori who attends Maori gatherings usually participates in whatever Christian denominational service takes place. `The coffin has been closed and sealed immediately prior to burial, a signal that the tangi has come to an end, (p.138) is not correct, for the tangi continues until after the hakari (for some tribes), the takahi whare (for others) or the poo whakamoemoe (for others). Closing a coffin, furthermore, can occur at any stage of the tangi.

There are other examples. Some show a lack of familiarity with Maori and the Maori use of Maori. Te Ao Hou, used as a chapter heading, is more than a new dawn or day, it is the code for The New World, or the modern or twentieth-century world. Whare mehana, used in the sense of a small group sleeping house, is not known to me or my colleagues, and is not in any dictionary. My guess is that it is an ideolect transliteration of mansion.

I mentioned that this is a book of confusing and varying character. There are too many irritating errors to correct. There are too many ill-considered or ill-chosen comments. 'Subjects look Indian or Eskimo in feature and clothing' (p.13), 'the hula feathers look excessively ceremonial' (p.65), `Kumate's moko . . has been partially hidden by a beard, which suggest that he has embraced Christianity . . . ' (p.65), 'the figure at right looks more Aboriginal than Maori' (p.225)—remarks such as these show that MAORI is a well-orchestrated and produced book, printed with care but written in a hurry.