The Small Bronzes of Paul Beadle

Although Paul Beadle's sculpture has received some critical recognition in New Zealand, where he has lived since 1961, the larger proportion of writing about his work has appeared in Australia.

This is not surprising since Beadle lived in that country from 1945, when he was discharged from the H.M. Submarine Service Pacific Fleet in Sydney, until 1961, when he was appointed to the foundation chair of Fine Arts at the University of Auckland. For two years after the war he was a freelance book illustrator as well as a sculptor. 1947 brought him a teaching post at the National Art School in Sydney, 1952 saw his appointment as Head of the Newcastle Art School and 1958 Principal of the South Australian School of Art.

Throughout a long and distinguished academic career he has continued the work as a sculptor which he began in England at the Cambridge and Central schools. He has produced monumental civic sculptures in stone and metal for the Australian cities of Canberra, Sydney, Newcastle and Cessnock, he has executed portrait bronzes and has an international reputation as a designer of coins and medals.

In New Zealand he is best known for his small-scale sculptures, which in latter years have included found-objects and have been distinguished by a wit and satiric edge rarely if ever found in the work of his contemporaries. It is this aspect of his oeuvre which has received comparatively little attention. 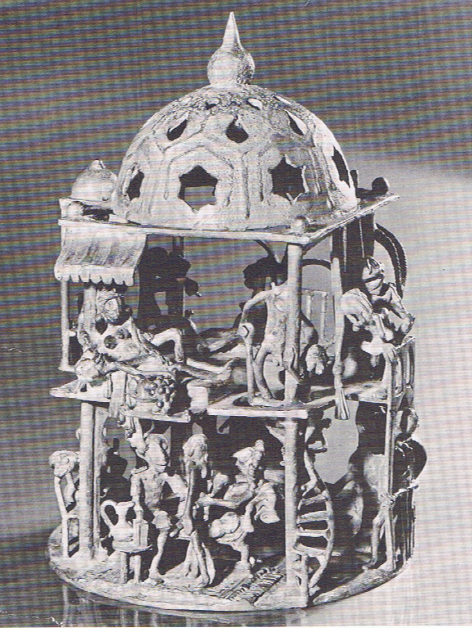 The critic Donald Brooke wrote of the Beadle Retrospective Exhibition held in Sydney in 1968: He is not personally much involved with the new movements in sculpture. His imagination is Gothic and narrative. His method of direct modelling in wax is more like that of tribal West Africa than anything that is happening in the European-American tradition, within which fabrication is now the dominant mode. Paul Beadle's small, complex compositions of tiny figures and environments are full of incident, charm, grotesquerie and, no doubt, moral seriousness — though we have grown unaccustomed to reading our art. This improbable marriage of medieval pictorial anecdote and allegory with the bronze style of the Benin or Ashanti, consummated in the South Seas makes the drearier bulk of the mainstream look as unenterprising and conformist as it undoubtedly is.(1)

The artist who can read criticism of such accuracy and understanding in the columns of a daily newspaper, is indeed fortunate.

The lost-wax method favoured by Beadle is that used in the making of the miniature goldweights by the Ashanti people of the West African region comprising Eastern Ghana, Togo and Dahomey. It is the same process that was used to cast small animals and shrine figures by the ancient Egyptians, Bronze Age Europeans, pre-Classical Greeks and pre-Columbian Indians.

Traditionally a bees-wax model of the sculpture is encased in a porous clay cocoon and baked. Beadle uses micro-crystalline wax and makes his mould of plaster and brick grog. The lost wax is replaced by molten brass (or other metals) which is poured into the empty mould. Paul Beadle likes to work with the soft wax which he rolls into forms, rather than carving wood or stone. He manipulates the wax into figures using hot tools to assist in the process, or else painting the wax with a brush.

Just as the Ashanti goldweights have as their main subject matter events in the daily life of the people—men in con-versation, children playing, women pounding grain—so Paul Beadle's work also shows evidence of the keenest eye for the everyday moment of experience which is gone in a flash. As the artist comments: I’m always on the lookout for the momentary incident, especially for funny things. Twice today I've seen subjects for sculptures: one was the sight of three large-bottomed women leaning over the counter of the Albany Bulk Meat shop on Dominion Road, the other was when one of the builders working on our house got himself into an awkward position on the roof. These things are typical, they are comedy . . . not serious at all.

The sculpture Pedestrian Crossing is an example of such a moment frozen in time. It displays the artist's characteristic gentle irony: the mournful, bespectacled figure who holds the Thou placard stands beside a similarly miserable though undoubtedly less constrained woman whose short, tight skirt and frank decolletage speak more of the burden of experience than of innocence. The legs and hand-to-buttock position register a tiredness which is in its way both an ironic counterpoint to the command THOU SHALT NOT as well as a proof of its validity.

Typical also is the way in which character is expressed in the sculpture. The businessman with briefcase and furled umbrella is without that aggressive swagger that would turn him into caricature—though that too is an aspect of Paul Beadle's art. Both Melanie's Wedding and Beauty Contest push the already present sense of the ridiculous inherent in both subjects to the point of absurdity. The finely-observed poses of the beauty-queens are contradicted by the Belsen-like quality of their bodies as well as the grinning vacuity of their enlarged mouths.

Melanie's Wedding re-creates a scene that took place in a Palmerston North park, where a wedding had consumed the greater part of a crate of beer before posing for photographs. The fecund Melanie has managed to retrieve some semblance of nuptial modesty for the camera, but her men are less inhibited. Bouquets have disintegrated; the groom is controlled both by a firm grasp of the wrist and, appropriately at a lower level, by a type of rope-handled tube/handbag to ensure that his levity does not get out of control too early. 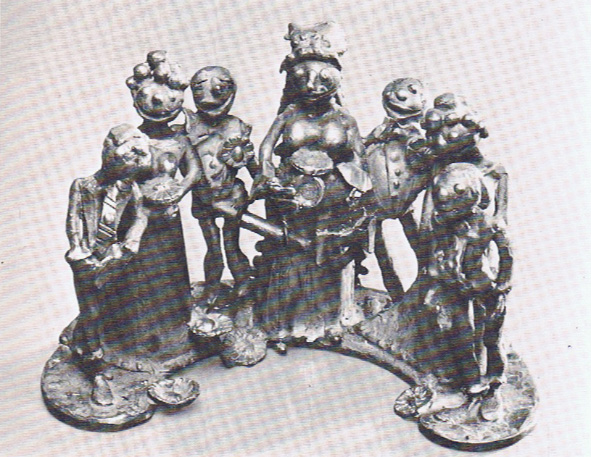 Beadle has clearly been influenced by the sexual frankness of Ashanti sculpture both in this satiric work and in his altogether more ambitious, though no less amusing, Oh, The Relief of Algiers. The original idea for this came from the period which the artist spent in North Africa with the Submarine Service. The setting is a domed brothel, an enclosed environment within which a wide variety of love-rites are performed. Behind the title lies a recognition of the fact that the liberation of cities can be achieved by means other than military ones. As Gil Docking pointed out: Paul Beadle's partiality for a circular composition in a number of his bronzes is not merely a carry-through from coins and medals and the revolving stage of the theatre. But, rather, the circular arrangement is closely allied to his working methods. From a funnel-like sprue, the molten bronze falls down a column through the centre of the inverted work, and then feeds up through the wax leads to all wax parts of the sculpture. This in itself tends to encourage the adoption of a circular structure.(2)

The last four years have seen a new departure, in that Paul Beadle's sculptures now include found-objects. Many of them are flotsam picked up on walks with his wife, Betty Cutcher, on Laingholm beach. It was she who supplied him with the junk-shop inkwell which forms the centre of a baptismal group—one of the latest of Beadle's religious subjects. One of his Stations of the Cross, Statio Secundi, uses a carpenter's marking gauge instead of the Cross in its depiction of Christ on the way to Golgotha.

More recent work has involved what the Beadles call erotics. Titled rather more innocently Nymphs and Shepherds, they are uninhibited celebrations of the reputed freedom of pastoral life, and illustrate an approach to love-making which can best be described as acrobatic. Many of the sculptures have a Daumier-like extremity of gesture and facial expression which is entirely appropriate to the ribald subject-matter. All are characterised by that sense of humour which plays such a large part in Paul Beadle's assessment of experience. In the final analysis, attempts at categorising his output are doomed to failure. As Beadle himself concludes: As far as I'm concerned it's a matter of doing what I believe in, in making what I want to and letting the mainstream go by . . .(3)