There is a remarkable exhibition showing at the Marshall Seifert Gallery. It's remarkable for the concise way that it shows Weeks's work before he left New Zealand, and the later cubist influence on his style. in fact, Weeks is one of our neglected painting heroes. He is the first New Zealander to come to terms with Parisian Cubism. Admittedly he followed the teaching of André Lhôte, who taught the simplification and disintegration of form, but had not understood the aspect of cubism that dealt with picture space. This concerned the reduction of pictorial space into a shallow visual box, a tactile space - one that could be felt. It was followed by efforts to project the forms in front of the pictorial surface.

This Lhôte misunderstanding can be seen in Objects on a Chair, where the arm of the chair projects like a barrel of a gun through the pictorial space. (It is, of course, part of the charm of this particular work.)

Group of Five Nudes, on the other hand, shows Weeks working the two-dimensional surface, as in the Iberian figures of the Demoiselles d'Avignon (the great 'tormented' painting of Picasso and of the twentieth century.)

Abstract with Oval Forms shows John Weeks's clear understanding of the methods of Léger, who had his own system of seeing live shape and colour as autonomous elements that could be used in the pictorial field independent of figurative content and indeed of each other. 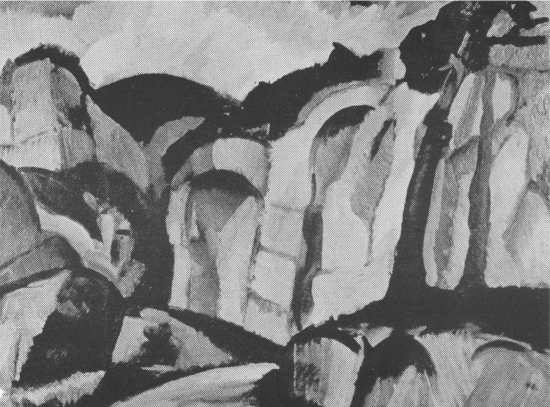 JOHN WEEKS
Roadway into the
King Country
oil on canvas

The remarkable landscape Roadway into the King Country shows Weeks applying Cézanne's concerns to the New Zealand landscape. It is this eclecticism of John Weeks that has caused his works to be overlooked and misunderstood by New Zealand art criticism: but surely this is part of his greatness.