and his links with New Zealand

Patrick Hayman's world is intensely private. He has lived with his wife Barbara for the past fifteen years near the river at Barnes, Hammersmith (not far from where Kurt Schwitters spent the end of his life), single-mindedly pursuing a personal mythology through numerous small paintings, drawings, constructions and poetry. He has several on the go at once, sometimes painstakingly re-working them over a period of years. For respite, he occasionally spends a fortnight at Swanage, the seaside resort in Dorset which was a favourite haunt of the painter Paul Nash. Ill-health in recent years has prevented Hayman journeying farther afield, but his necessarily hermetic existence has compounded an impressive talent and intellect. He reads extensively, often returning to the solitary wisdom of Rilke, to Hesse and Jung, and the new frontier writers Whitman and Melville. Acutely concerned with social and political issues, his conversations and letters are often enlivened by alarming references to 'dangerously right wing forces'(1) in Britain, or to a prediction that the Thames far too easily could break its banks in winter. 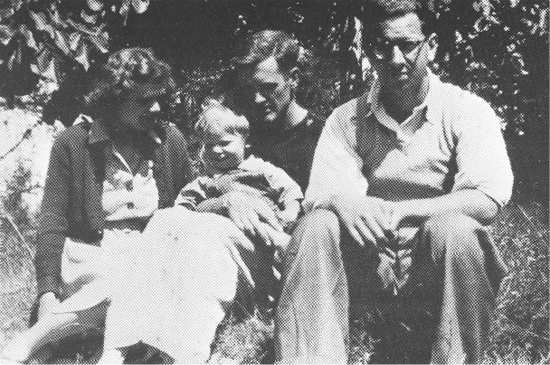 Patrick Hayman with
Colin McCahon and his son,
William and sister
Beatrice Parsloe
in 1945
(photograph by Noel Parsloe)

When I first met Hayman, in 1973, he had just held an exhibition of recent paintings and constructions at The Whitechapel Art Gallery, his sixteenth one-man show to date. By that stage he was represented in public collections as far afield as Lisbon, Saskatoon, Edinburgh, London, Adelaide and Auckland. Yet, by and large, he has had to bear the insecurities of not being in what critics and art historians call the mainstream of modern art.

Although aware of any new 'ism' to emerge (Hayman established and was editor from 1958-63 of the international art magazine The Painter and Sculptor he has nevertheless stoically kept to traditional methods, enjoying the quality of paint, a hand-drawn line, and the rhythm of verse, to that of an anonymous or strictly programmatic approach. He works in the humanist tradition, not only are his themes familiar, but the intimate scale and autobiographical nature of his imagery invite our immediate involvement. Richard Demarco, on the occasion of the 1973 Whitechapel show, observed '...a naive quality which could have been born out of his life in New Zealand when he was so far from that part of the world from which he draws his spiritual nourishment.'(2) It is in recognition of this consciously naive quality that Hayman has very recently been included in the Arts Council of Great Britain exhibition Alive to it all (1983). in the company of such luminaries as Paul Klee and Joan Mirò, he proves in his latest work that images evolved on the periphery, in time find just recognition. 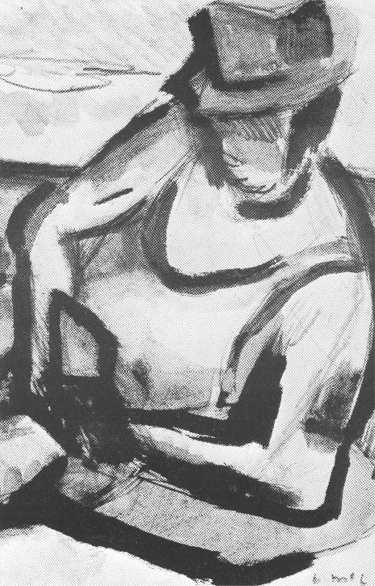 Hayman spent most of his twenties in this country, sailing from London on the S.S. Rangitiki early in 1936. The family already had its roots in Dunedin (his parents first met one another there) and when Hayman arrived he came into contact with Colin McCahon, his wife the painter Anne Hamblett, Doris Lusk, Rodney Kennedy, Charles Brasch and Ron O'Reilly. They were all ardent pacificists, bent on pursuing careers as artists and writers. Hayman impressed them by his quiet yet strongly opinionated nature, and although he went to the Dunedin School of Art, he was generally regarded more as a writer, particularly of short stories and poetry (described by O'Reilly as 'Kafkaesque'). After three years in Dunedin he moved northwards, pausing briefly at Mapua then he stayed at Nelson for about a year before settling down in Wellington in 1940. He enrolled at Victoria University, mixing with the more articulate senior students of History and English. John Beaglehole was a vital force in those days; a highly cultivated and civilised personality whose social conscience had prompted the proceeds of his first book on poetry to go towards relief for victims of the Spanish Civil War. Among Hayman's fellow students, who became his friends, were Hubert and Noel Witheford, Janet Paul and the Dutchman Eric Schwimmer. The arrival in New Zealand of European refugees, like Hayman and Schwimmer, stimulated a generation of young minds, already prepared to accept their national identity, and looking to broader philosophies and wider civilisations.

On his return to England in March 1947, Hayman almost immediately went to live at St Ives in Cornwall, where he increased his interest in painting. The primitive flavour of his style was already established, and it was encouraged in this environment which twenty years previously had nurtured the untutored vision of the Cornish fisherman, Alfred Wallis. 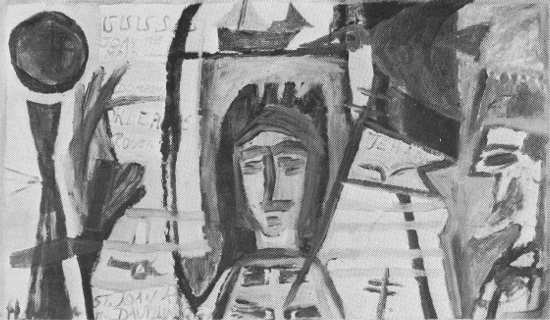 PATRICK HAYMAN
St Joan and the
Dauphin of France 1971
oil and acrylic on board,
457 x 599 mm.
(Collection of the
National Art Gallery,
Wellington)

Demarco remarked that Hayman was the first artist to attract him to the importance of St Ives as an artist's colony. 'I knew of his work before I knew of Alfred Wallis, ... He led me to Alfred Wallis through his paintings . . .'(3) Hayman's love of the sea and ships testified by the valiant little fishing boats that emerge so often in his compositions - and his penchant for using scraps of card and wood to paint on, witness his affinity to Wallis. Christopher Wood, the other figure one readily links with the St Ives group in its early days, had also impressed him. Wood, Hayman believes, changed the course of English painting. He was the only one with a real feeling for colour and life and originality.'(4)

When Hayman discovered St Ives, the colony of artists included Ben Nicholson, whose work had returned to a more naturalistic vein, after the severe abstractionism of his all-white reliefs. Possibly the war had provoked a need to return to a figurative, representational image. An art that was really completely abstract, like 'Constructivism', distanced itself from humanity. 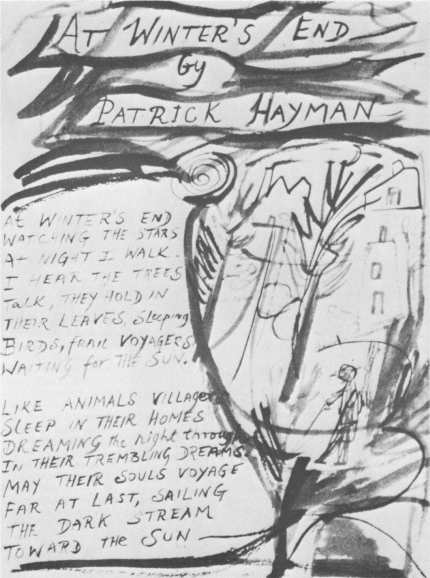 Hayman's roots reach much further back, to the formative visionary William Blake, whose universe was constructed equally through visual imagery and words. Hayman struck a similar chord in A Painter's Notes: As a painter I write poetry and as a poet I wish to illustrate it. I believe in the integration of poem and illustration, of word and line, word, and painting. The nearer an artist can get to making the whole of a creative production himself the better it is. Perhaps in a time of authoritarianism, monopoly and mass production, some return to a modern equivalent of the illuminated manuscript may be necessary. Furthermore the individual artist will then perhaps be in a position to maintain control over what he produces.(5)

Basil Dowling, who was the first to write on Hayman for a New Zealand periodical, spoke of the concentrated imaginative force of his paintings and poetry which produced 'powerful archetypal images and myths (both ancient and modern). . . .'(6). Sequences are drawn from the Bible, from Shakespeare or modernist drama, from historical incidents such as Riel and Dumont (7), or they may relate to a topical event, disturbing in its implications, for example Atomic Explosion at Mururoa. (8) We are confronted with a highly personal vocabulary, which is by turn, both sombre and lighthearted. Hayman's illustrated poems, his richly coloured paintings, and Dada-like constructions, are all essentially icons, symbolising man's predicament in the spiritual and material world.

Centrefold of
the exhibition
brochure
Alive to it all.
Arts Council of
Great Britain 1983

New Zealand's National Art Gallery now represents Hayman in the permanent collection. The two pieces chosen are characteristic of the literary strength of his work - The Lady from the Sea, a painted construction of 1978, and the earlier oil/acrylic, St Joan and the Dauphin of France (1971). Both acquisitions were accompanied by extensive notes ... 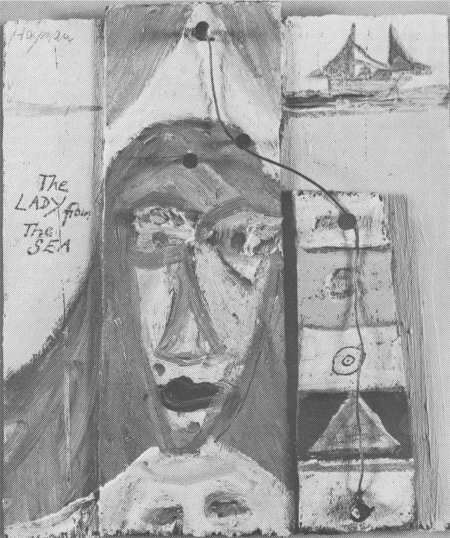 I have been very involved with the St Joan legends ever since Seeing Carl Dryer's film Jeanne D'Arc. This magnificent, horrifying document, both abstract & real ... so upset me I started a series of paintings about 20 years ago on the various aspects of her life (including 3 poems). I feel obsessed with TURNING POINTS in History and in this painting, Joan is portrayed with a flag and confronted by the uncertain face of the Dauphin of France. In this mystical moment is born the support which leads Joan to her victories and to her death ... and maybe to the birth of European nationalism. I frequently write on my paintings and in this one the various comments such as 'Orleans', Rouen I , Joan the Maid' and so on map out the short span of her life and the little ship sailing on the horizon is her soul. 'The colours, blues, pinks, greys, dark colours and ambiguous shapes contrast with the sharply, dangerously defined areas of white, conveying I hope, the strongly charged atmosphere of the meeting.

Meanwhile, a dark bird flies on the horizon, like a war-plane, ...' 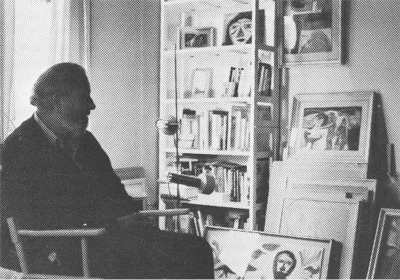 Patrick Hayman
in his studio at Barnes,
1978
(photograph by Anne Kirker)

(and on the 1978 construction)
I have done several oil paintings on themes from Ibsen, in particular, 'The Lady from the Sea'. The obsessional and moving myths embodied in this play connect so much with my own ideas that I finally made the construction in 1978. This small assemblage is made up principally from polychrome wood, nails and wire. The nails, which project, play an important part in the piece visually and emotionally (recall TS Eliot's lines - 'Those are pearls that were his eyes'). I like wire also, which connects or disconnects objects, people, ideas The different depths of the wood, both conceal and reveal, intriguing and misleading the human eye. Thus the ambiguity of the scene is part of the construction ... (9)