When John Coley, the director of the Robert McDougall Art Gallery, selected this year's Waimairi Art Award Exhibition, his choices for the first three places were particularly varied and wide-ranging.

Marie Lenihan's new portrait Samu, a confident and sensitive pencil-and-wash drawing, was one of the finest representational works in the exhibition and earned her third place.

Second place went to John Hurrell for one of his recent paintings made from pasta alphabet letters. Although these works are literal in a very real and prosaic sense of the word, they have little in common with the term as it is usually applied to painting. Indeed, these meta-critical pieces lie on the periphery of 'painting', resting in a somewhat academic and intellectual area of their own. Consequently, the work Hurrell submitted on this occasion bemused more viewers than it enlightened.

However, it was a painter's painting which won first place. Michael Armstrong's Large Reversible Number 6 was an energetic, gestural work using a wide range of vibrant colours. It was a celebration of paint and painting and, although a controversial choice as first place, in selecting it as such Coley reaffirmed the painterly tradition in Canterbury.

Yet it is not the painterly, expressive qualities of Armstrong's work which are provocatively different, After all, Abstract Expressionism in its many forms has been conventionalised and mannerised to the point of appearing contrived or simply out of place. Rather, the unusual and testing features of Armstrong's painting are evident in the way he supports and presents his painted marks-his scrubbings, his daubs, his brush-strokes.

His large canvases are unframed and loosely hung. Furthermore, they are irregular in shape and painted on both sides, so that rather than hanging flat against the wall, they fall in folds and convolutions which tumble down the wall or meander across it. The canvases become another of Armstrong's marks - part of his calligraphic vocabulary - rather than just being a ground against which to paint. As marks though, these canvases are not fixed in any one arrangement or orientation. They are marks with a front and a back of different quality but equal value. They can be arranged differently each time they are presented - a flexibility that opens up new possibilities for viewer as well as artist and an interesting and significant aspect of Armstrong's work. 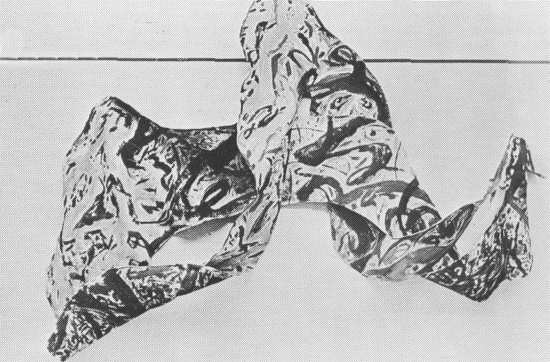 These Large Reversible Paintings, some over three metres long, are sewn from sections of canvas so that, when flat, parts of the final shape overlap one another. The obscured parts can be revealed by twisting the canvas structure back: which, in turn, exposes the reverse side of the painting. Because the works are hung against the wall, yet are essentially three-dimensional, they function as a succession of disclosures and concealments. What parts are exposed and how the works hang are decisions the artist makes when hanging the paintings. Armstrong does acknowledge however that they can be hung by persons other than himself.

In this sense there is a similarity to Richard Killeen's cut-outs. One important difference is that Killeen stipulates on the boxes in which the cut-out pieces come how his works should hang. These instructions don't significantly reduce the number of hanging configurations: but rather they stipulate the type of configuration. That is to say, the orientation, spacing and number of pieces, is pre-determined by Killeen even when he is not installing the work.

Armstrong leaves such aesthetic matters to intuition rather than rule, and consequently, with no guide-lines, it is possible to botch these paintings by hanging them poorly. Indeed, the idea of audience participation is incompatible with this type of work; and it is peculiar that Armstrong is willing to relinquish control over such a crucial part of his activity.

Armstrong's current exhibition at the Canterbury Society of Ails Gallery entitled Painted Canvas Structures is a direct development of the earlier work presented for the Waimairi Award as well as of his one-man show at the Brooke-Gifford Gallery last year.

Just prior to his Brooke-Gifford exhibition, his painting involved supporting loose canvases over wooden constructions: the latter usually being painted to become integral parts of work as a whole. The rigid/flexible quality of these Painted Constructs provided an interesting contrast and worked particularly well where the forms were simple and easily read. However the combination of energetic flecks of colour, irregularly-shaped canvases and multi-directional framework became altogether too complex and consequently the supporting framework was abandoned in favour of suspending the loose canvases directly from the wall.

The works since then have attempted to tie-in the painted marks more closely with the canvas shapes. While this was not completely achieved with the works shown at the Brooke-Gifford Gallery, the pieces nonetheless had a vivacity and excitement about them. The works currently on show at the CSA achieve a better integration between mark and form - the more organic markings being echoed in the fluid, curvilinear canvas shapes.

As if trying to avoid complacency, Armstrong does not allow all aspects of his work to be resolved. New elements are introduced that are unexpected and unexplained. Words and phrases appear on the canvas seemingly unrelated to the painting activity already present. Furthermore, some of the works are hung so that their natural slump or gravity is not in keeping with their prefabricated curves. That is to say some of the canvases 'peak' at their suspension points and then fold back abruptly on themselves, interrupting the cut-out rhythm of the canvas. These visual jolts are disquieting - they give the works an uneasy look that results in visual friction and clashes. Yet Armstrong uses such a device to good effect. By creating visual conflict he entices us to look again, to ponder and to sense that further changes lie ahead.