Robert Jesson's double exhibition at the Denis Cohn Gallery and in the foyer of the Auckland City Art Gallery was one of the best seen in Auckland so far this year. Jesson's work falls roughly into three groups: the free-standing works, the hanging wall-pieces and the ceiling works. However, there is nothing clear-cut about this division, for what seems characteristic of one group can also be prominent in the other categories. With the lack of individual titles, or some other form of designation, there are problems in discussing Jesson's work in specific detail. What can be said about it must be in general terms.

The ceiling works were alone restricted to the Denis Cohn Gallery. in size they are the smallest, and in certain respects the most sculptural-especially the fat, cigar-like, bandaged, floating forms. Yet these were the least interesting of the works offered. The other suspended from the ceiling sculptures came closer in form to the rest of the works in the exhibition: although they still retain a relative 'lightness' appropriate to their airborne status. But they did inhabit a differently-felt atmosphere. There is about them a sense of potential menace. This is gained from the flat, angular planes which manage to twist and jut their sharp-edged extremities forward as if to spear the air. The way in which these multi-flat-surfaced planes are painted makes them appear even more fragmented. Yet, standing underneath such a work, looking directly up at it, its under-surface is a neutralized, natural wood colour. 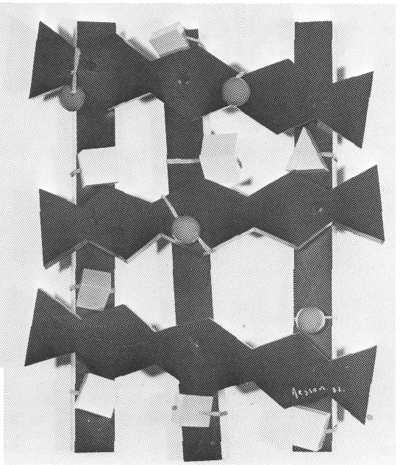 The floor-and wall-pieces possess a great sense of earthbound mass. They are solidly, almost aggressively constructed. Some are well and truly bolted together; others have their parts tightly lashed in place. But for all the chunky, three-dimensional qualities with which Jesson invests his work, he still operates best when his free-standing forms and wall reliefs come nearest to being containers for visual ideas in a manner similar to the way a painting contains visual ideas and images. In this sense he belongs to the new breed of sculptors for whom the purity of clean sculptured form is a side issue. His forms, for all their spatial articulation, are also given over to qualities that are essentially painterly; and to some extent, conditioned by the conventions of the shallow visual plane and the frontal view point. This is not only true for the wall reliefs but also for his free-standing pieces, with their tendency to be two-sided. The viewer faces a single side at a time, and so the habit of walking around' the work is minimized.

Even if there is nothing especially new about the various basic shapes that Jesson employs in his work, they most definitely do belong to the currency of the twentieth century. The fact that this aspect is not particularly obvious is a credit to those qualities of his own which Jesson has injected into his work. In a way he is a 'constructionalist' in an almost Dada sense; and also a 'a new wave expressionist'; but without being committed to either. He seems to have managed well a marriage between old and new aspects of twentieth century modernism, while remaining himself. In these terms, and in spite of any formal complexity, his work is readily understandable (even when considering the difficulties his wall sculpture in the Remuera Public Library has provoked).

When Jesson's sculptures are at their best, then all the various parts that contribute to a work are well-articulated, held in tension and taut. Yet this discipline seems casually applied. It is this factor that adds to the vitality of his work. He generally tries to avoid junctions that meet at angles that are too easy or too rational in disposition. Rather, the angles are often just a shade awkward, with a suggestion of randomness about them. in this way his surfaces undulate in a manner that both supports and denies the monumental aspects in his work.

This is particularly so in some of the hanging wall-sculptures, where the sense of mass seems almost too much for the wall to sustain. It is this combination of mass and surface undulation which gives to Jesson's work its sense of robustness and power. It is a power tempered with playfulness; even with a touch of wit. The billiard-size balls and small triangular wedges help out in this respect. Colour also plays its part here in the way it is often irrationally applied both as paint and texture.

In Jesson's use of paint, the basic colour given to most of his works has a controlling effect on the smaller areas of freely-applied paint, so that the brightnesss of the splashes and brush swipes, and the effects of the bubbling texture, are well contained within the confines of the work itself Although most clearly demonstrated in some of the wall sculptures, this also applies in a slightly different manner to the narrow, standing sculptures with their shallow abutted planes-especially in the way the paint is applied to the slashed slits that penetrate the sculpture from one side to the other. Much simpler in form than the other free-standing and wall sculptures, each of these works did suffer a little from being attached to a, plinth. This seemed to be an unfortunate compromise where some extra thought might have suggested a happier solution.

In miniature, the fifteen linocuts and wood-cuts shown at the Denis Cohn Gallery demonstrated how Clairmont has grown into a printmaker of national importance. The display also illustrated his basic concern with three general topics: the nude, the portrait and the environmental still-life.

The susceptibility of much of his work to symbolic interpretation was unequivocally demonstrated in Hiroshima Mon Amour: a print possessing the type of powerful statement that some Mexican print-makers produced earlier this century.

The ability to imbue a subject with more than usual visual power is most clearly evident in some of his still-lifes where inanimate objects take on a life of their own. Sink, a 1978 linocut, demonstrated this power very well (it was illustrated in Art New Zealand 14, p 39). The sort of clarity that has made such potency possible can be appreciated if the emotive simplicity of the early Small Still Life (1974), is compared with the greater complexity, yet, in a way, more rational imagery, of the Large Still Life with Objects from 1980.

The extent of Clairmont's artistic maturity could be gauged by comparing the somewhat indecisive forms in his early Bending Nude (Homage to Heckel) (1969), with the coherency of form and design in recent prints of a similar subject and in the same narrow vertical format as Nude Reclining in Bath (1982); or that of his small, simple, three quarter back-view of a Nude (1979). But the power with which Clairmont can invest the human nude was best seen in the aggressively frontal, black-imaged, Seated Nude (Rachel) (1981).

The 1969 Portrait of Vicki fares better as a print than does the Bending Nude of the same year. However, the Self Portrait from 1970 shows a marked stylistic advance. In both, the distribution of the white and black areas is clear-cut and obvious: but whereas the shapes that define Vicki's head are blocked-in, the forms in the Self Portrait already hint at the linear expressiveness deployed in his later prints. 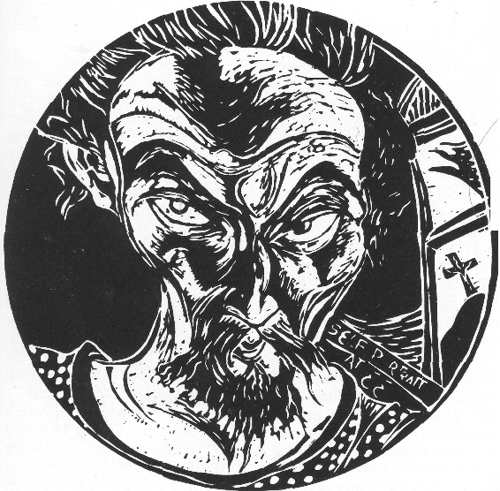 The small Self Portrait of 1978 still retains certain qualities that stood out in the early self-portrait: but these qualities have been refined, with the expressive element gaining in flexibility, while the clear-cut distinction separating the black from the imprinted areas is less apparent, being handled in a way that enlivens the appearance. of the print. Such attributes are well demonstrated in Clairmont's round print, cut in 1982, Self Portrait at 33. This print is strong, introspective in certain respects, yet at the same time open-handed.