An Experiment in Art for the Community

Over the last year, Auckland has become the scene of a large number of community arts projects. Murals are appearing on inner city walls; paintings are being hung in hospital waiting-rooms; free performances are taking place - even in Queen Street; groups of musicians are performing in community centres, schools and institutions. Artists are making themselves available to a much wider public than the selected audience available through the usual channels: and the public's response has been enthusiastic and appreciative.

These community arts projects have been made available to the public through the efforts of an organisation known as ARTWORK. 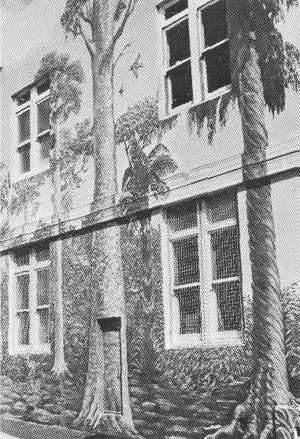 Vince Wicken's mural
on the Wooden Workshop
in Hereford Street

Ironically, the impetus for this onrush of art activity in the community comes from the current unemployment situation. Although in New Zealand we have been relatively lucky, and have escaped the high levels of unemployment occurring in industrialised countries throughout de world, we are experiencing a major unemployment problem which has affected all sectors of society. Most opinion polls show that unemployment ranks alongside inflation as one of the most important areas of public and political concern.

Jobs for artists have always been few and far between: but as they become scarcer and the competition for any sort of job increases, it has become necessary for the system to try and find a way of coping with what is potentially a serious waste of trained talent and proven ability, Artists, like everyone else, are feeling the effects of unemployment. In 1979, the Labour Department's Temporary Employment Programme (TEP) gave recognition to the fact that art is work, and initiated a series of projects around New Zealand providing employment opportunities for artists. As art projects were outside the usual scope of Labour Department activity, an organisation which could propose and operate work programme schemes specifically for artists was required.

Lacking in administrative facilities, the Queen Elizabeth II Arts Council and the Labour Department responded to an initiative made by Hamish Keith and the Auckland City Council's Employment Department, who were aware of the practical difficulties facing artists during this period of high unemployment. The Council's Employment Department offered to establish ARTWORK as a part of its efforts in the temporary work area, realizing that there would be significant benefits for the Auckland City Council as a result. The Labour Department agreed to follow the advice of the Arts Council on all artistic matters, and it was the Arts Council that determined the direction that ARTWORK took.

ARTWORK'S administrative core consists of a multidisciplinary team of three supervisors, and a clerical assistant, who in their office in His Majesty's Arcade formulate ideas for work projects. Proposals must first be presented to an Advisory Committee representing the Northern Regional Arts Council and the Auckland City Council, chaired by Hamish Keith. Each organisation looks after a different area of ARTWORK's operations. The Arts Council must ensure that appropriate artistic standards are being maintained; that trained people are being employed; and that its policies of encouraging artistic professionalism and greater public involvement in the arts are being furthered.

Several strategies are used to put these policies into effect. They are aimed at supporting professional theatres, dance companies, and orchestras; providing an infrastructure for the crafts industries; and fostering employment in the arts. While the provision of permanent ongoing and self-sustaining work would be the most desirable policy, at the present time it is necessary for the Arts Council, like other institutions, to turn to the Labour Department for help.

The Auckland City Council Employment Department, as the body administering ARTWORK, checks the proposals to ensure that they are practicable and comply with Council employment requirements. The City Council has the power to insist that proposals conform to its administrative principles. As all ARTWORK employees, supervisors and artists alike, are employees of the City Council it must ensure that its system can accommodate this diverse and unorthodox range of people; and that they in turn understand the responsibility that this relationship to the City Council brings.

Following the scrutiny of the proposals by the Advisory Committee, they are sent to the Labour Department, which decides whether they meet with their criteria. The Labour Department decides on appropriate unions and rates of pay. once approval has been given, the Labour Department refers applicants for the jobs outlined in the proposal, and ARTWORK supervisors interview these people to determine whether they reach the required standard of professionalism. Appointments are made by the supervisors on the basis of the applicant's eligiblity, training, experience and quality of work.

Schemes are monitored by the supervisors, who maintain close contact with the artists during the three months to a year that a scheme may run. Supervisors are responsible for both the administrative side of projects and the maintenance of suitable artistic standards.

At the end of this complicated and unwieldy process, the real work begins - enabling an artist to do, for the benefit of the rest of us, what they do best.

Despite such labyrinthine bureaucracy, ARTWORK has been, in the words of Tim McWhannell, Senior Supervising Employment Officer of the Labour Department: 'very good for unemployed artists. They have used imagination and initiative in setting up projects that have been beneficial to the artists and to the community as a whole.'

Over 150 artists have been employed on ARTWORK PEP schemes since February, 1982, when the venture began. We have tried to find work for every sort of artist, and have successfully employed sculptors, painters, ceramicists, graphic artists, designers, film-makers, photographers, dancers, actors, mask-makers, musicians, researchers, clerical staff, administrators, teachers and technicians. To qualify for employment through ARTWORK, an applicant must be a professional or semi-professional artist with a history of recent employment or training in the arts. Labour Department criteria demand a job-search period of eight weeks between registering as unemployed and becoming available for PEP projects. 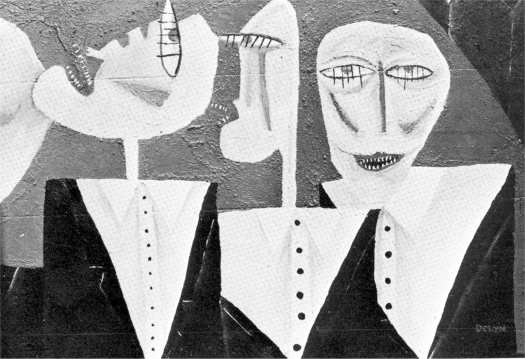 Delyn William's mural
on the corner of Tole Street
and Ponsonby

The artists who work on these projects are working for the community, rather than for the sake of art alone. This simple fact narrows the scope and freedom of the artist: but brings a degree of responsibility to the public which can and must affect what the artists are able to do. It is this commitment to the community and the public which makes our schemes distinctly different from grants - which may allow freedom to experiment or develop ideas of artistic importance but no immediate relevance to any larger section of the community.

Because these schemes are full-time jobs, artists are expected to work within defined boundaries and submit to the same kind of supervision that other City Council employees undergo.

To describe every ARTWORK scheme, who was involved, and what happened, is outside the scope of this article, which outlines the policy and structure behind ARTWORK. It must be said, however, that many highly skilled artists have been employed on ARTWORK schemes; and that without the support they have received, their chances of managing to survive as practising professionals would have been considerably less. it has been to the mutual benefit of the community and the artists that these schemes have existed. One can only hope that they continue as long as the unemployment situation continues at its present level.

The temporary nature of these projects is a source of insecurity to many artists. Although artists are more used to temporary employment than other sectors of the work force, the negative effects of short term or intermittent employment affect artists as much as anyone else. The positive benefits of these projects are many, and in some respects outweigh the negative aspects: however, the temporary solutions offered by the PEP system presume that unemployment is a temporary phenomenon. People's lives prove otherwise, however - with long term unemployment a reality for many artists.

Positive benefits for artists which have arisen out of ARTWORK include the development of skills; a lessened sense of isolation; and the opportunity to put into practice ideas that would otherwise have been unrealised. Without the assistance of ARTWORK, many artists would have had to continue to work on an unacceptably restricted scale, reaching a limited audience and being unable to fully utilise their skills. Resources provided by ARTWORK have also encouraged art to happen in places which would previously have been unable to compete on a commercial market for the services of artists.

Because profit isn't a central motive, experiments can successfully be made. Perhaps the greatest benefit (and indeed the longest lasting one) is in the educational area, where the experience of art as a living process is being given to children and young people. ARTWORK schemes involve education at every level from pre-school to the adult population. The importance of understanding art as a process, not just a product, is fostered by ARTWORK through a developing commitment to the idea of public involvement in the arts. Consultation, discussion and involvement are seen as an essential part of the artist's role.

ARTWORK projects seem to be growing in the direction of specialist groups dealing with specific community needs. So instead of an indefinite group of musicians or performers being given the brief of, broadly speaking, 'public performance', future schemes are likely to be aimed more directly at target groups within communities. The evolutionary process which has resulted in ARTWORK taking this direction should in the long term enable us to employ a wider range of artists - by increasing the variety of projects under our auspices. We cannot envisage the unemployment problem becoming less severe in the immediate future: so our efforts are directed at consolidating the position we have already established as a responsible organisation whose projects are a vital and exciting part of contemporary-cultural life.