In Gordon Brown's and Hamish Keith's recent An Introduction to New Zealand Painting 1839-1980 Gordon Walters' 1960s and '70s work is barely referred to other than in paragraphs on 'pattern painting'. Most of the examples of this kind of painting, according to the authors, had 'the flavour of exercises based on established international rules that combine geometric abstraction with the veneer of high technology'. This sort of work, so the reader is informed, 'superficially . . . looked good, but . . . its artistic content was limited', and its 'effects' 'deadening'.(1) It is not clear whether Brown and Keith extend this dismissal to Walters's koru paintings: though, with virtually no description or discussion of his work elsewhere in the book, the reader could reasonably assume that Walters had played only a minor role in New Zealand art since the 1940s. Even if that was not the intention of the authors, the relative absence of comment, in contrast to chapters each on Woollaston, McCahon and Hanly, allows one to draw the implication that Walters's work does not merit such special or lengthy attention - an assessment that would quite simply go against history, obviate what has actually been the case. 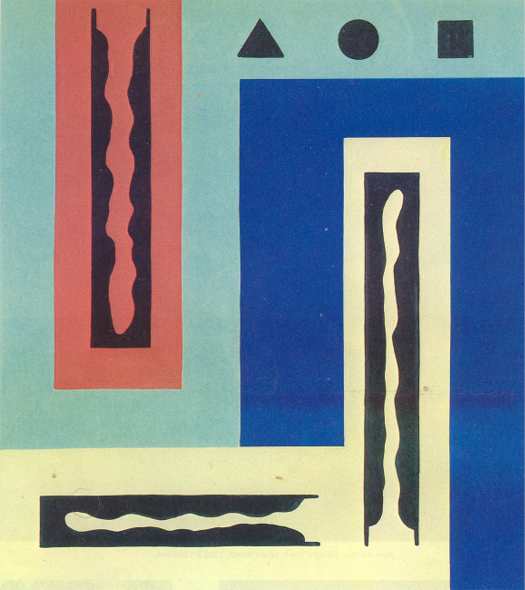 The Walters Retrospective (the first there has been), curated by Michael Dunn and mounted by the Auckland City Art Gallery, puts the record straight. The seventy-seven paintings, drawings and prints from 1944 to 1982 provide more than sufficient evidence that Walters (born 1919) is one of the most important post-1940 New Zealand artists. His work over that period has exceptional and conceptual substance and rigour, and is of a consistently high quality by any standards, local or international. It would be difficult to find a comparable body of work among, artists of his generation in New Zealand. 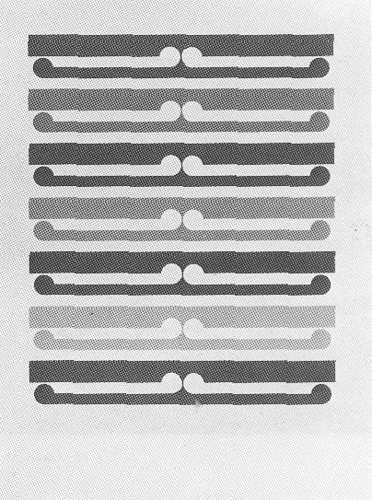 The examples of work from the 1940s and '50s show that Walters was well ahead of his time in the context of New Zealand art. His sources of inspiration were various, unusual, and unprecedented here. The Surrealism of Tanguy, the work of other major mid-twentieth century modernist artists such as Klee, Miró and Mondrian, the contemporary French abstractions of Herbin and Vasarely, and so-called primitive art, especially Oceanic and Maori, provided the most notable input. Walters's works so related were not slavish imitations of foreign models, but rather products of an intelligence open to new ideas, exploring a range of then unconventional formal strategies and approaches to picture-making. For example, the ambiguous spaces, the sense of the alien in the familiar of his early Waikanae Landscape (1944), echoes Tanguy, but the image otherwise is Walters's own - a 'take' on the New Zealand landscape that went against the types that prevailed in the indigenous landscape imagery of the day; the naturalistic the Cézannesque, the 1920s and '30s new realist. 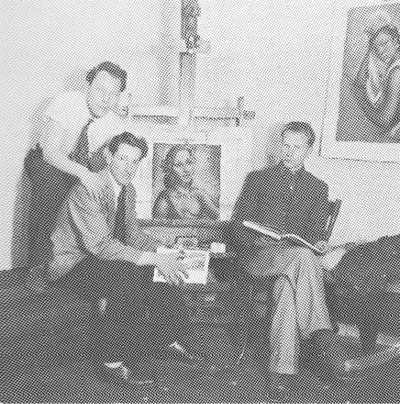 The inspiration for his paintings could be more obscure. For instance, the starting points for a group of gouaches in the mid-1950s were drawings by a schizophrenic patient at Oakley Hospital, that Theo Schoon, who was working there, had shown Walters. These drawings were no doubt emotionally loaded. Walters, however, incorporated their idiosyncratic, abyss-like configurations, as in Untitled (1956), into abstractions, in which the interactions, the tensions of colour and shape on a flat spatial field were the dominant concerns - a mode of painting for which there was little support for, or understanding of, in New Zealand in the 1950s. 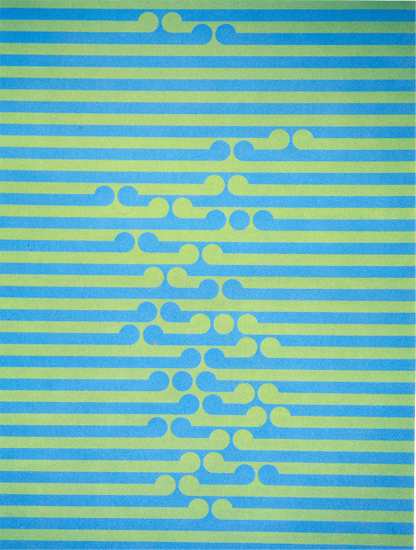 This transformation of his source material also characterises Walters's koru paintings, which constitute the bulk of his work over the last twenty years, and for which he is best known. Walters's first investigations of the koru motif, small studies in ink and gouache, were produced in the mid-1950s. These were closer to the Maori, source than the later larger paintings, in that the vegetal, organic quality of the Maori motif was retained. In the 1960s the motif was geometricized. Except for the circular forms at the end of, or adjacent to the series of crisply delineated stripes, the curves and irregularities were straightened out. That is the koru motif provided the means for what were studies in formal relationships using what Walters described in 1966 as a 'deliberately limited range of forms'. The forms so derived were not intended to have any illustrational or symbolic value. Certainly the Walters's koru paintings in the exhibition offer exemplary demonstrations of the range and wealth of visual experience and formal relationships that can be constructed from radically restricted formal means; from play on the variations, the permutations of a repeated motif,- from the interactions of colour, tone shape, spatial field, and from the tensions generated thereby. (Maori and Oceanic art share these qualities too.) 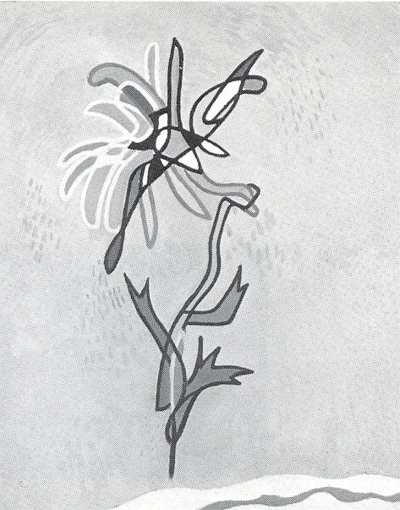 Walters's work is important not just because he was one of the first to produce successfully resolved abstractions in a generally unsympathetic artistic and social climate in New Zealand, but also because his abstractions make nonsense of the still commonly found prejudice that work of this kind is no more than 'pattern making', limited, 'empty', 'ail head and no heart'. His work is, if you like, 'about' seeing, and the subtleties of perception and feeling, non-objective feelings: again Walters, in 1966 on the occasion of the first exhibition of koru paintings, comments that, 'feeling alone dictates the placing of the motif'. His paintings need to be looked at closely to fully apprehend their qualities - the elegance, delicacy and strength of the structuring of forms, the equilibriums so established, the density and purity of the colour, the immaculate surfaces. 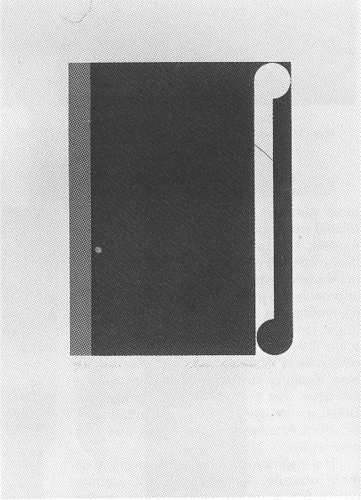 There is another dimension to the work that gives them a central place in any history of New Zealand art too. For a long time Maori and European art remained resolutely separate in the consciousness of most Pakeha New Zealanders. Even if admired, Maori artefacts were generally seen more in terms of craft than art; the stuff of museums rather than art galleries. Walters (with Theo Schoon) was one of the first European artists who responded to the Maori work in terms of art and its formal values, rather than from an ethnological or craft viewpoint. In this respect his evaluation was in line with the modernist view of primitive art-as a source of new and revitalising forms, methods and ideas. In the case of Walters's koru paintings the Maori motif was assimilated into a European conceptual framework-that of formalism, It could be argued then that, though Walters has never presumed to mine or exploit the symbolic or spiritual meanings of Maori art, his use of the koru motif still amounts to a form of appropriation - the taking over of an aspect of a subordinated culture in order to service the requirements of a dominating culture. On the other hand the relationship between the Maori motif and the koru paintings could be viewed more sympathetically - as an implicit recognition of the values of Maori art and culture; as a benign attempt to amalgamate ideas and forms both European and Maori. 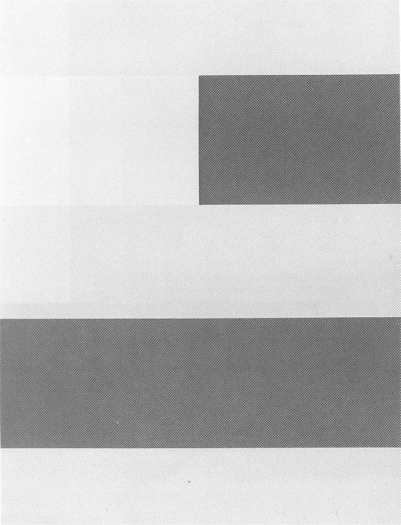 Walters's frequent use of Maori titles points in this direction. Besides functioning as marks of identification for individual paintings, the Maori titles enabled Walters '. . . to pay tribute to the Maori tradition, which has meant a great deal to me, and to reinterpret it in terms of my own art and my immediate environment.'(2)

However Walters's work is viewed, the Auckland exhibition presents a fine selection from his output of the last forty years. The most informative catalogue maps the context of ideas and practices in which the paintings and drawings were produced. The result... a show that was both one of the best to look at in recent years and one which dealt with issues crucial to serious art in New Zealand since World War II. 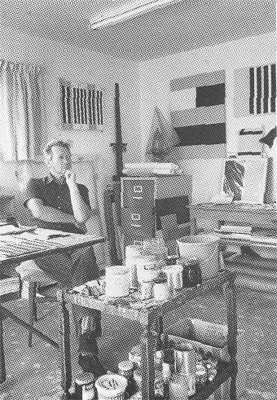 Gordon Walters in his studio
(photograph by Marti Friediander)