In the present economic climate the National Art Gallery has adopted a policy of assisting artists through allocating specific spaces or areas of the Gallery to them in which to work, the resulting artwork being included as part of the Gallery's exhibition programme for an agreed period of time. This arrangement is admirable for the installation pieces which are a current form of expression.

A wall in the director's office was the space allocated to Wellington artist fan Hunter. For this installation Hunter combined drawing with a variety of objects both purchased and found. Using various symbols, the artist presents an interpretation of the current mood underlying the social interaction between Maori and Pakeha, and suggests how this might have developed from the earliest days. Because it deals with this issue, the work develops strong political overtones - even though the motivation for the work arose out of a more sociological and humanitarian interest than a strict political bias, Symbols in a culture externalise the whole internal process of identification which form the patterns of associations and attitudes within it. 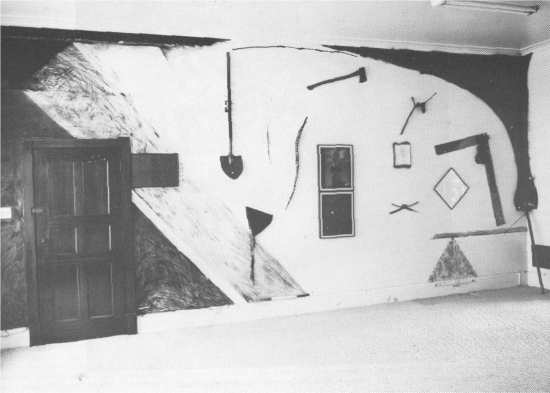 Hunter was born and bred in Belfast, Northern Ireland and was an art student at the time of the outbreak of the present Troubles in 1968. The sudden forceful realisation of imposed inequality and discrimination amongst people of different creeds and ideologies made a strong impression and as a result has remained a theme in his work. Institutionalised intolerance and injustice come in for particularly strong criticism. The Crown as representative of certain authority is a familiar symbol in Ireland and New Zealand. Its association with the axe has been used in previous work and so became easily incorporated in this wall installation.

On Waitangi Day 1983 Hunter observed the additions to the Kent Terrace statue of Queen Victoria, cibachrome photographs of which appear as central portions of the piece. The red paint which splattered the statue and seemed to form a pool of blood on the grass below the pedestal set up the associations which made the colour so important in the work. in the context of the theme of the work the black charcoal in the drawing formed its own obvious symbolic meaning. 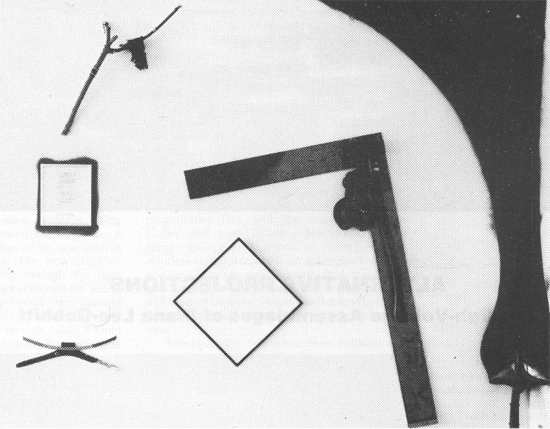 Red has long been the colour associated with Britain's colonial interests. Until recently most maps of the world were generously coloured with this indication of the values and ideas of a particular way of life which, in most cases, was arrogantly considered to be the best. Unhappily, it usually followed that the indigenous life of the country over which dominion had been established was generally downgraded, ignored or rearranged to suit the needs of the colonising power. Red is the colour of aggression and also figures prominently in the political lives of countries such as Russia and China. The manner in which this colour burgeons out from the lower corner of the wall and spreads upwards across the space expresses something of its menacing qualities in the political context. The black area by contrast is restricted, held back by the sloping edges and seems withdrawn into the opposite corner. It is pierced by a white line which intensifies its existence and dramatises one aspect of the theme of the work as a whole - the penetration of one group by another. Artistically this is one of the most satisfying areas of the piece with the rich texture of the charcoal built up from the short sharp strokes by which the area was created.

Although the black and the red areas significantly never meet they are connected near the ceiling level by a suspended rod of delicately bound twigs, akin to the tool of a water diviner. When thought of in this capacity it signifies sensitivity and is suggestive of a delicate and fragile relationship. 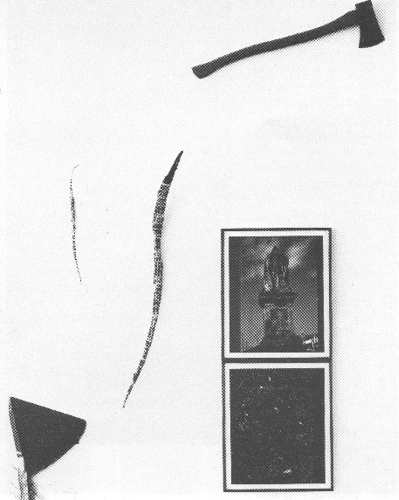 The shovels and axes were already painted red and so became absorbed into the piece. They indicate at a primary level the dual aspects of colonisation, the creative and the destructive, though neither should be treated as an absolute in these respects. Nails and spikes adorn the handle of one shovel which, like the bound twigs is meant to indicate that care needs to be exercised in all social interaction. Phrases such as 'Handle with care' and 'Hard to handle' readily come to mind.

Perhaps the most significant area of the work is that containing the set-square with the framed instructions for its use in close proximity. A few words typed under the instructions state: 'The most wonderful capacity in the hands of one who knows.' Herein lies much of the basis for the strife in the process of colonisation. Too little regard is given to the differences in understanding and to the knowledge which another culture might possess. It is expected that the benefits of one culture will be understood and appreciated, and will be of benefit to another - perhaps to the detriment of emotional and spiritual values. The three blank frames, black, white and red which are also part of the work hint at the emptiness of the institutions and conventions which are taken for granted in a culture, existing in the end for themselves and not for the people for whom they were created.

Through the use of some familiar and fundamental items from our culture Hunter has presented a symbolic assessment of the problems which he considers central to the current tensions in the relationship between Maori and Pakeha, and has suggested the reasons which underlie these. The black area pierced by the white, the shovel with the spiked handle and the instructions for the set-square carry the core of these ideas and point up the sensitive areas, the wounds, the Hot Spots from which bitterness and resentment arise.