A note on a Motif in the Paintings of Frances Hodgkins

One of the persistent themes in the Hodgkins oeuvre is the figure of a woman shown with a young child. Beginning in an early sketchbook, it continues in a variety of styles and with many variations until the late twenties. In the New Zealand period the woman is usually a Maori, as in the well-known work in the National Art Gallery. European peasants in local costume are often the models in the pre-1914 years, but others are middle-class ladies in frilly or diaphanous frocks. The Dunedin gallery has two such examples, including the fully Impressionist Summer where a third figure is introduced. (See Art New Zealand 16, p. 35.) The later Summer Joys, shown in my Portrait of Frances Hodgkins, p. 86, is among the earliest of the artist's oils and suggests post-Impressionist tendencies further developed in Adoration, also reproduced (rather faintly) in Portrait, p. 103. A fairly late, austerely non-representational version of the subject was catalogued and photographed in New Zealand thirty years ago but cannot now be traced. There must be other versions in private hands abroad and some are bound to turn up in this country if interest in Frances Hodgkins continues and prices go on rising. 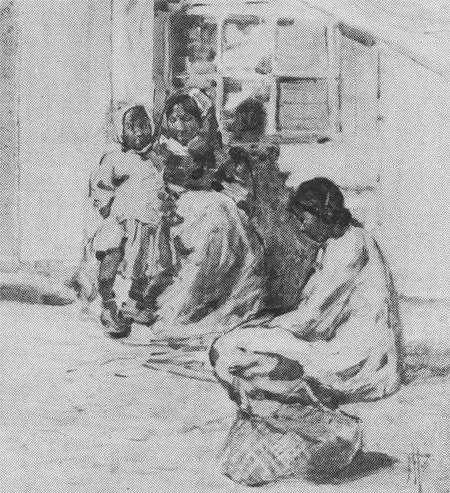 The latest to arrive is a work that recently passed through an Auckland auction room. Considered worthy of a colour reproduction on the catalogue cover, it shows a young woman seated in a garden before a pram which holds a child. The title in the catalogue itself is 'Isabel and Child', presumably on the assumption that the figures were the artist's sister Mrs Field and her youngest son Peter. Other details follow: 'watercolour, signed with monogram and dated 1905, 10 ¾ x 10.' Nothing is said about the work's previous history, but apparently it came from Brisbane. It could thus have belonged to Queensland relatives, the Days ('Aunt Mary', Mrs Day, was a younger sister of Mrs Hodgkins), or to a pupil of Trances, Bessie Gibson, honoured in 1978 with a retrospective exhibit on. Whatever its provenance, the work is unquestionably authentic. (Fake Hodgkinses are less common than they were a decade ago - perhaps threats of prosecution have been effective.) 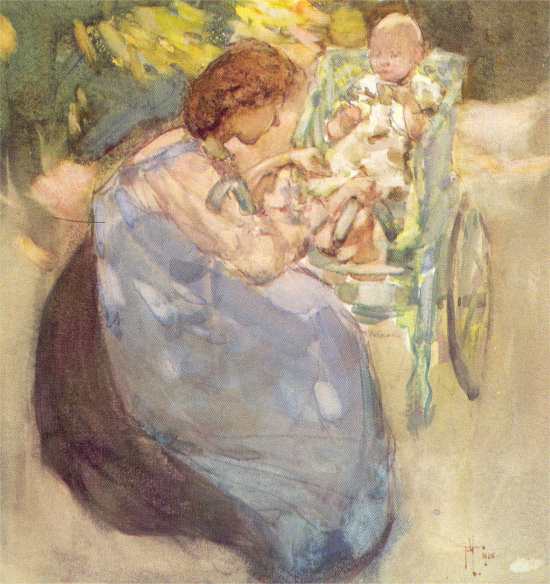 As we know (all six of us), 1905 was a critical year in the artist's life, a turning-point. After three years in Europe she had returned home at the end of 1903, acquiring a suitor in the passage through the Mediterranean. In due course her engagement was announced but, for obscure reasons, broken off early in 1905 just before she set out to join her fiancé. So she stayed on until she again left in January 1906. During the two years she was back she lived with her mother in Wellington, teaching a few pupils, exhibiting with the art societies (often pictures done abroad), and painting a little. It was an unsettled, unhappy period, one of the least productive since she began her professional career in 1890. Typical works, illustrating the division in her loyalties, are Dunedin's Ayesha (Portrait, p. 52) and the National Gallery's Orange Sellers, both Moroccan in subject but manufactured in Wellington, and the blatant Dutch Housewife (Portrait, p. 52), for which the model was lsabel's laundress. Then. as nearly always among what is uninspired, there are a few works of exceptional quality. One is Babette in the Dowse Gallery, Lower Hutt (Portrait, p. 57), a second is Idlers (Portrait, p. 56), and now this previously unpublished variation on a familiar theme. 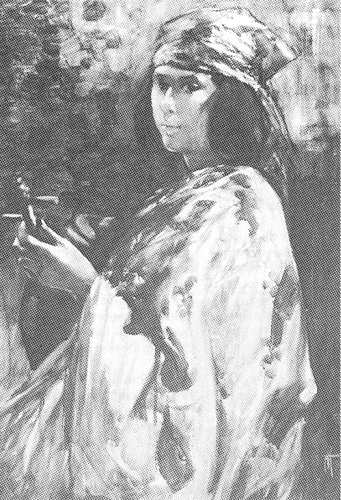 Here it seems necessary to dispose of the catalogue title. For a number of good reasons the figures depicted are not Isabel and her third son. The young woman bears no resemblance to the many likenesses of Mrs Field who was thirty-eight, in 1905 and, moreover, being a matron of social standing was unlikely to have posed, even for her sister, wearing an overall or apron. (Her costume for a formal portrait some years later may be seen in Portrait, p. 72.) The model looks about twenty and was probably a nursemaid. As for the child, it could not have been Peter Field who was born late in November 1905 and only six weeks old when his aunt left New Zealand. These are not pedantic quibbles but facts put forward to emphasise the true nature of the small painting. It is not in any strict sense portraiture but a work in which the central figures combine with clothing. objects, trees, and flowers in a composition, simple in outline yet complex in detail, whose merits are obvious even in reproduction. Summing up what is best in the artist's past, it also seems to point forward to some of her late gouaches, those 'marvellous agglomerations of colour and shape', as Myfanwy Piper called them. (Frances Hodgkins, p. 17.)