A Teacher and Painter in Retrospect

To his former students at the Canterbury School of Art, Rudolf Gopas has a very special status as a lively and controversial teacher. During the early nineteen-sixties when I was a student at the School of Art, Gopas was by far the leading personality among the painting lecturers. His reputation at that stage was not based so much on his painting as on his ability as a talker about art, and as a stirrer. He rarely pulled punches in assessing student work. Most of it he tended to dismiss with cutting criticisms. 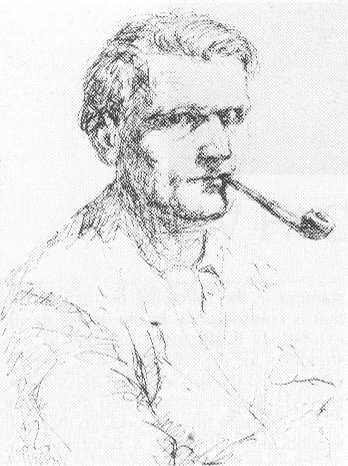 Gopas took a very clear theoretical position about painting. He was for spontaneity in art, for the intuitive and the experimental. He had a great loathing for the routine exercises of the art school; still-life, antique drawing, and the academic life-class. He found these studies boring and useless. He wanted to stimulate each student and to discover their potential. If he felt a student had no potential, he said so. 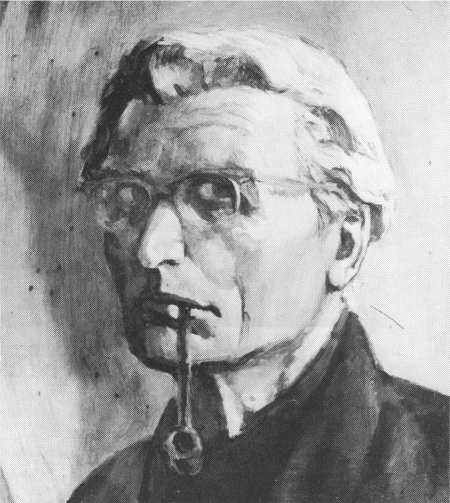 Although he was often abusive and difficult, Gopas was a magnetic figure in the studios, dressed in a blue, paint-stained coat and smoking his pipe. He liked nothing better than a good argument about painting and he often had one with the more lively students. Gopas promoted the European tradition in art at the expense of the British. Van Gogh, Matisse, and Gauguin were his gods. He was always ready to discuss their paintings and methods with his students. Among English artists Blake alone commanded his respect. 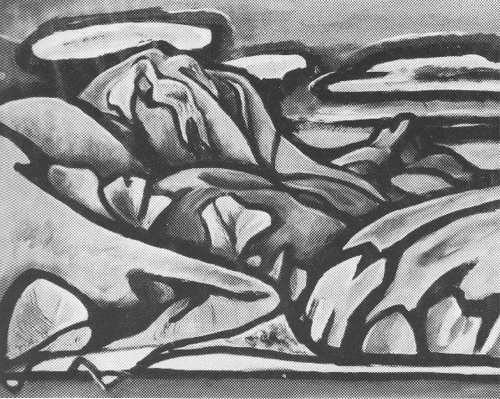 But Gopas was not just a teacher. He was also a dedicated painter. The fine retrospective show organised by the Govett-Brewster Gallery makes that very clear. There are sixty works on show, ranging in date from a self-portrait of 1947 to a drawing of 1976. To many this show will be a revelation of the talent Gopas possesses as an artist. The early works are somewhat pedestrian: a banal view of Dunedin Harbour, painted in 1950, is competent but unspectacular. Other early paintings, such as the Bearded Fisherman, have greater freedom in the application of paint and the distortion of form, but barely manage to avoid being visual clichés. 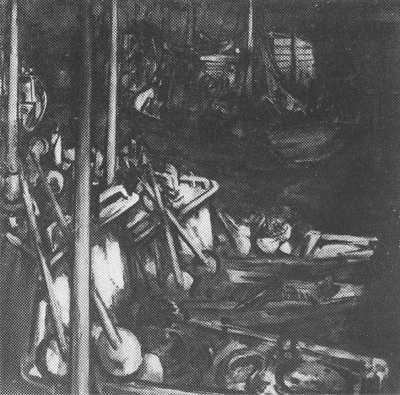 During the nineteen-fifties, it seems that Gopas was painting his way through a range of admired sources in painting. My Chair, (1956), with a book on Van Gogh prominently displayed on the seat, is a gesture of homage to the Dutch master. The painting is made with simplified drawing and has strong colour applied with plenty of vigour so that the surfaces appear rich and variegated. Viewed today, from the perspective of 1983, the derivative aspects outweigh the new. 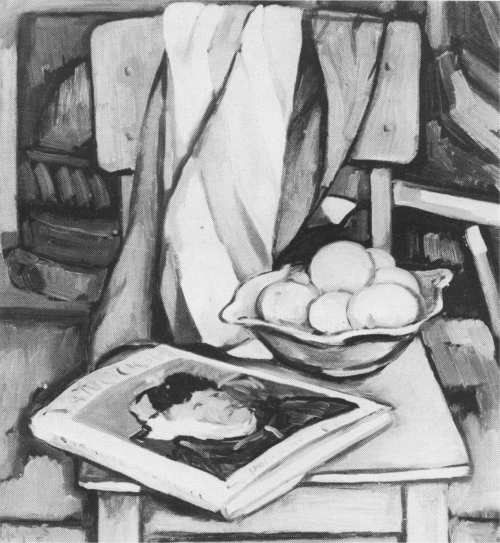 Undoubtedly it is with the fishing boat paintings made at Kaikoura and Lyttleton that Gopas began to get started as a painter. True, the style and colour are not original, but there is an energy and power in the works that breaks through and communicates to the viewer. Here Gopas starts to establish brooding areas of dark green and blue in works like Boats at Kaikoura (1955). These paintings have not much to do with descriptive realism or regionalism. For Gopas, these subjects appear as a motif, rather as Mont-Sainte-Victoire was for Cezanne. The familiarity of the motif allowed him greater freedom to focus on interpretation. 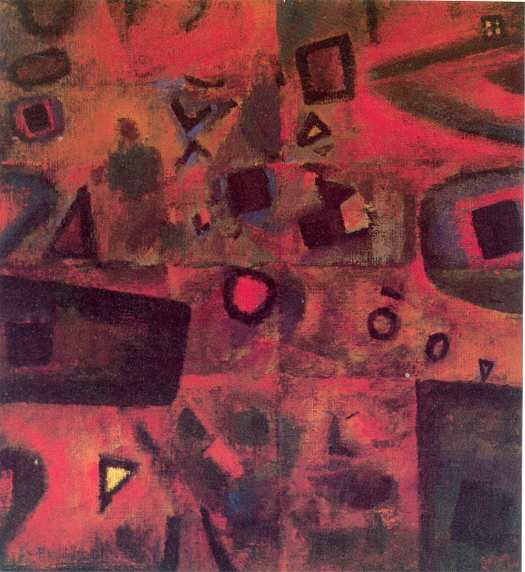 At this stage he was still working inside a conventional approach to painting. He was accustomed to making plein-air studies. He still used specific subjects as a starting point for his painting. In no sense did he break away into non-figurative art or even abstraction of the sort John Weeks achieved about this time.

Works such as Red and Blue (1964) look in the direction of Paul Klee and for the first time start to suggest a new method of working. Gopas has painted shapes and colours onto the surface without concern for specific spatial relationships or defined subject matter. Although at first he did not commit himself to this method of picture construction, by 1966 he made an important breakthrough to his mature style. 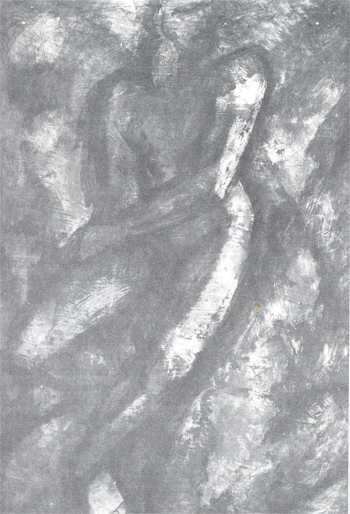 The 1966 paintings show a shift to outer-space for their subject-matter. Paintings like Nebula and Cluster of 1969 and 1968 continue what becomes an obsessive interest in the void of space, and the tiny particles of matter that make up the material world. These paintings show Gopas working at a new peak. He used fresh techniques to build up exciting surfaces of grit, PVA and iron filings on ivory-board and hard-board backings. His paintings now have an all over quality and conventional composition is largely dispensed with. 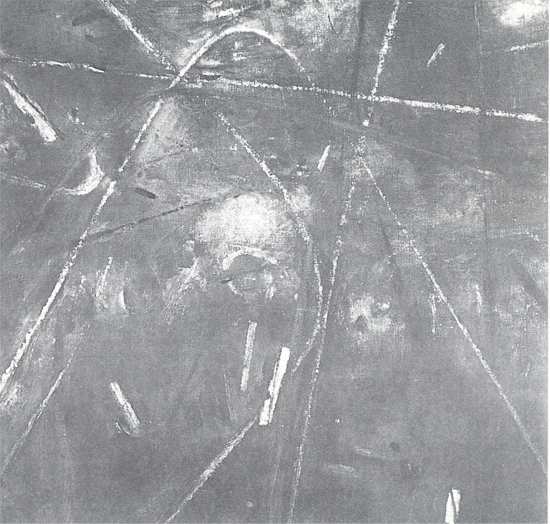 In these paintings Gopas reveals his true power as a colourist. He works with grey and black, deep blue, and, in Galactic (1966), with red and orange. In the later Galactic (1978) he returns to intense blues and greens. Based in part on his interest in astronomy, these paintings show Gopas moving away from his beginnings as an artist to an impressive new, and individual style. 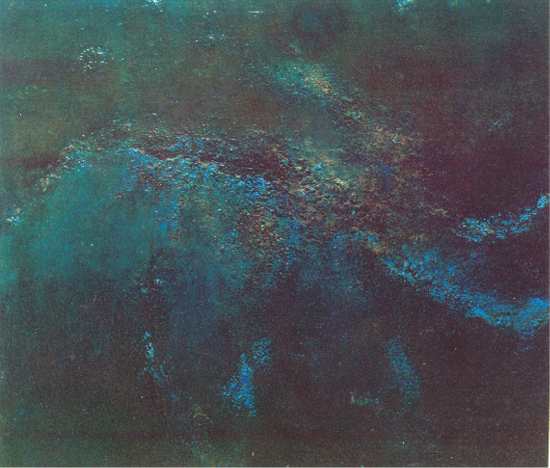 The highpoint of his career, and of the exhibition, comes with the late paintings made in 1975-76. Called 'Paintings for the Sun', they are in a series owned by the County Council, Ehrwald, Austria. Works such as That Narrow Zone of Life (1976), introduce a philosophical element previously lacking within his art. The dark expanse of the painting contains a small sun or star surrounded by the planets in their orbits-at once fragile and miraculous in their journey through the chill reaches of space.

The Paintings for the Sun give an apocalyptic view of the world and of the fate of man. in many ways they are depressing and bitter works in terms of ideas. Solar Explosion (1976) underlines the precarious nature of life as we know it and the certainty of ultimate extinction. Human affairs take on a puny and tentative aspect from Gopas's astronomical perspective.

In such paintings Gopas allows the texture of canvas and the staining of paint to do the work. There is a new economy of means; a concentration on essentials that is surprising and totally persuasive. And then come the words. Like Colin McCahon before him, and like Blake, Gopas finds in the written word a necessary tool to convey part of his message. 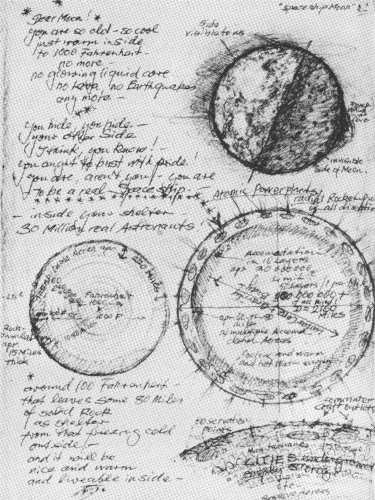 Self-Portrait as a Flea (1976) has lines of verse composed by Gopas that echo the lines of Blake's Songs of innocence and Experience. For example: 'Who is me/but a Flea/on the brow/of a Giant/'. In this work Gopas has painted the letters in irregular lines of printed lettering to one side of the painting.

Last of all, and most polemical, are the drawings such as I see, I See, (the Sun) (1976), Dear Moon (1976) and Cash-Dollar Cash. In these drawings Gopas combines diagrams, poems and drawn images to create individual and amazingly effective imagery. His debt to Leonardo da Vinci's scientific drawings is clear, as is his debt to Blake's illuminated books, but the end result is his own. His concern here with basic values, with life and death, with the ultimate value of art - e.g. Rembrandt Where Are You? (1976) - reveal a social conscience and moral philosophy rare in New Zealand art. It is tempting to compare him in this respect with Colin McCahon - making the necessary allowances. 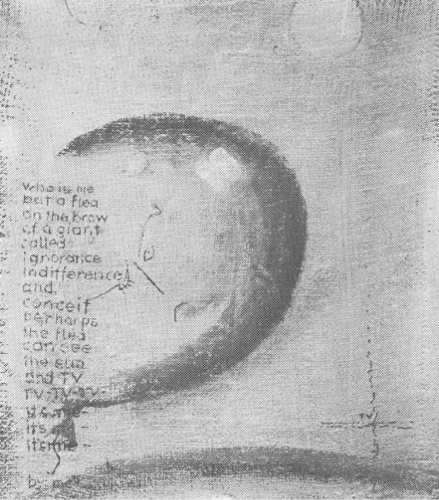 At present Gopas is known mainly for his' early paintings. It is an important function of this exhibition to point out that it is with the late works that Gopas becomes an impressive artist. Finally a note should be made of the good quality of the catalogue that accompanies the show. 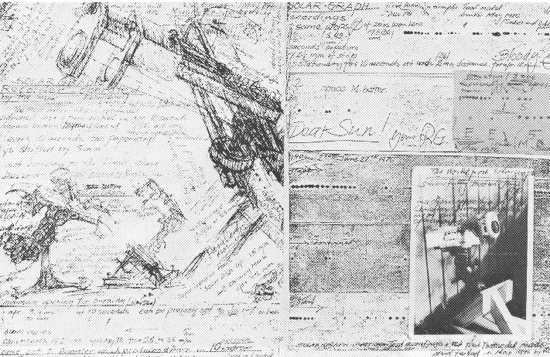