It is easy to take for granted the work of one's friends. But there was no need for indulgence at Cilia McQueen's performance, An Imaginary Music at Red Metro last March.

The two-hour piece blended poems, spoken and echoed on revox, with tapes synthesising poems, natural noises and fragments of speech. Visual elements, lines drawn from a familiar landscape, the Peninsula, or found images serially arranged, were drawn into the act. This difficult mix was performed with panache and absolute focus of idea and realisation.

In a blue boiler suit, at the controls of her tape deck with its slowly moving wheels, Cilla was like an aviatrix at the birth of the modern era. (Later she mentioned Pilot Small!)

Images of flight recurred:
The best thing is to turn into a bird and piss off over the ocean.

A green mike made a rare note of colour among the graphs that papered the walls. I thought of the pioneer photographer of the 'twenties and 'thirties, Margaret Bourke White with her matching outfits and camera clothes. A sense of style. Even the angle of cigarette and conciseness of the one sip of water had a place in the arrangement of lines, timbres and gestures. 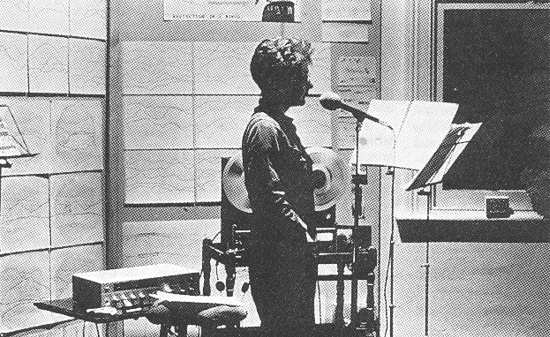 Acting in the interstices of visual and auditory worlds, Cilla sometimes referred to the nature of her synthesis.

It seems the landscape is music in itself/how to transmit it without intruments/leads me to couch it in the languages of line music and poetry...
I think it may be possible to line the systems up and find the jump wires between them
Isomorphism
and then she goes on about Muriel the cat and outside the slanting green hall.

If Muriel is a Cheshire Cat fading out the poet is Alice with her arms round the fawn always coming out of the wood where things have no names and giving a great leap of discovery -
Inside the room is liquid glass
and
Inside the poem is liquid glass
Lightness; precision; pleasure.

Pain too perhaps where senses are nerve ends, exposed. There is a solitude here approaching solipsism in the intensity of her looking. To describe: The piece opens with train sounds, long loud and convincing.

These sounds are later abstracted syncopated to a playful imaginary music - but towards the end of this two hour solo flight the high notes recur communicating a peculiar distress.

The main push of the piece is celebration of the thing seen or sensed. From among the cabbages at Careys Bay the fishing fleet, or carefully perceived and noted the careful flights of birds. The tape picks up sounds of conversation. 'say something it's easy' (to daughter, or, of mother, or daughter).
When she heard she was to learn the piano she was so happy, she sat in the bath all soapy and played arpeggios up and down the porcelain rim but as the music lessens the old lady hit her fingers drank tea all the time and ate biscuits, or: to dog 'what a performance'. It doesn't matter much what, is fed into the synthesiser. It is the pattern that counts.

Subject related and taut as catgut the lines on the walls come into play.

Because we are presented with syntax rather than drama, variation rather than change, one receives a similar statement/feeling from any one drawing or poem by Cilla McQueen.

But it was the complex structure she raised in the minds of her 'audience' that vivified, words and marks that to me on paper and separately have seemed oddly disembodied.

I can only wonder that her audience should be held rapt to what was in effect an extended haiku. And feel its length to be only another instance of her perfect tempo.

She could I imagine present this cerebral cabaret in abbreviated form anywhere, with only a few lines for backing.

Cerebal - but sensuous; sophisticated not quite dandyish. Aesthetism tempered by a simple response to sea-wind - daughter garden - house tasks.

And inside those environs circles of house, verandah, garden, hills, ocean - a kind of female Daedalus/ Icarus; in the labyrinth Pilot Small.

One aspect of postmodernism, Cilla reflects, might be the happy eclectism with which she chooses to be modern like Maya Deren, Julia Stratchey, Imogen Cunningham, H.D.; or Lois Lensky (pilot Small) or Alice.

Another, that this nursery modernist, formal acrobat, uses real time to play in: making even the intervals in her performance remarkable, the talk continuing sincere, gestures fixing themselves on the air. We, also there, holding it, did not have to suspend proprioception, change focus to become consumers for art.