Art in Auckland picked up quickly after the summer drought and, in no time at all, getting around the galleries started to look like a fulltime job. In terms of the many shows offering at a growing number of dealer galleries, the public galleries at the City Gallery, Outreach and the Auckland Museum, places like Room Service (a newish gallery with a repertoire of less orthodox artists) and The Last and First Café (another recent development - art while you eat) ... not to mention one-off occasions like student shows at the School of Fine Arts, car-sales art (the McMillan-Ford art competition), shows in artists' houses (as Lois McIvor had in late April), and even in about-to-be-demolished buildings (Rick Goldstone in a derelict City Council structure) ... all this serves to indicate that the sort of commentary or review space available is inadequate, given the sheer quantity of production.

Nigel Brown
at the Last and First Café

Relatively recent galleries like Space and The Last and First Café have been making a particularly strong impact: Space, which gave us a remarkable show by Peter Peryer last year, continued to promote the cause of photography with Anne Noble's consistently striking images from The Wanganui. Much of the interesting and innovative work being done in Auckland is photographic. Besides Anne Noble's exhibition, we have also seen a large and generally interesting group show from Photoforum members at the Auckland Museum; an arresting collection of large colour photographs from Christine Webster at RKS Art; and Glenn Jowitt's collection of Polynesian images at the City Art Gallery.

Jowitt's show preceded Anne Noble's by a little, and a certain similarity of subject matter made some comparisons possible. Jowitt's work for all the brilliance of images, facility of craft, retained a distance from the people imaged which made me uneasy.

Some local reactions went a long way past uneasiness: a reviewer for Auckland University's student newspaper Craccum lacerated the show for the falsity and political naivety of its pictures of happy natives. In this matter the intention of the artist is obviously crucial, but what the viewer has to deal with principally in making an assessment of the artist's intention is the images presented. Jowitt's very attractive colour photographs did not seem entirely to escape the mire of tourist-pix which they superficially resemble. I'm not suggesting that the resemblance is anything but superficial, nor that, as photographs they had anything to connect them to the mechanical manipulations of pose, viewpoint and lighting effect that the sellers-of-dreams deal in: but I had difficulty with these images in distinguishing between sympathy and stereotype.

Painting in Auckland in 1983 set off on a note that was anything but evocative or subtle: the first of Auckland City Art Gallery's Aspects of recent New Zealand Art series, New Image. This show was curated thoroughly and informatively by Francis Pound, and included a surprisingly varied range of works from (quoting from Rodney Wilson's introduction) 'a group of figurative painters who evoke memories of, or associations with, objects... linked... by a similar language, and by choice of colour, paint quality and surface.'

The works shown ranged from Chilcott and Hartigan's stylisations furthest of the group from 'the object' to Killeen's witty contrivances, and George Baloghy's parables on modern art and life. And Denys Watkins is seen to be an artist who appears at times to overstep Pound's 'no-angst' mark. Such is the black humour of Sunday Suicide. 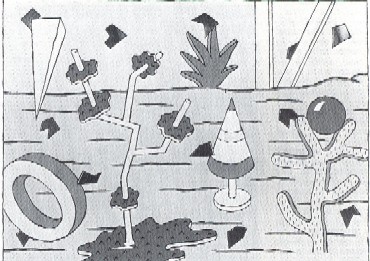 Besides variations in wit, the show was an interesting coverage of painting processes related to new image art: particularly the self-conscious nature of this sort of painting. A much more subtle acknowledgment of process than the obvious brushstroke, the heavy outline was apparent in works about making art: takeoffs and send-ups. Baloghy, Watkins, Frizzell, Killeen are all in on that act. It was a stimulating show, a good start for what should be a very worthwhile programme at ACAG.

Two of the artists featured in the New Image show have participated in the Art on the Wall exhibitions at The Last and First Café: others who have been there are Nigel Brown and Mary McIntyre, and among those to follow are Jacquie Fraser and Pamela Wolfe. That's a fairly comprehensive collection of local artists; and it is (pleasantly) surprising that so many artists are prepared to submit themselves and their art making processes to this sort of public scrutiny. What happens is that an artist has a month to make art on a large wall in this cafe. (it used to be a furniture salesroom, very large a very much street level: so that there are no intimate corners or getting away from the bright lights. What's more, your audience is an eating and drinking one, which might be seen as unfair competition.) The artists so far have in fact produced entertaining art for a lot of people. Frizzell, no doubt in his element as a sort of metamorphosed dancing chicken, is there right now. Nigel Brown's show, the one before last, was organised on a tight theme: working out further aspects of the life of James K. Baxter and his impact on New Zealand society. The artist hung completed works at the beginning of the month, and worked on further ones on the wall, thus completing the series. Characteristically these were paintings with much intensity and seriousness, strong images with considerable impact: somehow too sombre for their jolly location.  The Last and First Cafe is a splendid addition to, and alternative to, Auckland's white-walled cubes. It is good to see that Ray Castle, founder of the unfortunately defunct Closet Artists gallery, has found something else useful to do.

At the dealer galleries, art was a lot less exuberant. Many more established artists had shows which affirmed their reputations rather than breaking remarkably new ground: Brent Wong at Denis Cohn, Stephen Bambury at Petar/James; Stanley Palmer at Portfolio, Rob Taylor and Paul Radford at RKS Art. Newer artists like Dean Buchanan at Outreach and Dorothy Law produced shows of considerable interest. Buchanan's vibrant west coast landscapes, and Law's shrouded miniatures have been some of the most striking images on the local scene so far this year. 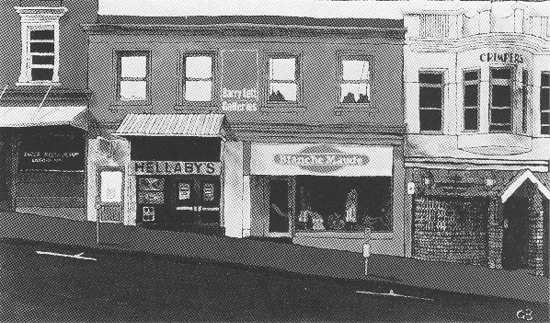 Helene Carkeek's attractive interiors, and Charo Oquet's more bizarre ones (at Denis Cohn and RKS respectively) produced good shows: and by the way illustrate 'that the statistical balance has been slightly in favour of shows by women artists. This is not at all an indication of strong feminist/political art presence in Auckland however: the Women Artists Association New Works by Women show was a pretty accurate picture of women's art here. The show included some works by feminist artists whose images and techniques drew on the breakdown of traditional art social hierarchies which characterises the work of the Women's Art Movement. But the show was not intended to simply reflect those concerns. On the whole, it represented works by artists who also happened to be women. Two shows by important women artists as part of the Auckland Festival in March further emphasised the non-political nature of most local women's art: Louise Henderson and Gabrielle Hope both shown in survey shows, at the John Leech Galleries in Remuera and Auckland City.

Both these artists drew strongly from the post-cubist, formalist tradition in local art, and Ross Fraser, in his introductory comments to the Gabrielle Hope show, by drawing attention to Hope's affinities with other neglected women artists such as May Smith, Maud Sherwood and Edith Collier, affirmed the important role that women artists played in this very important direction in New Zealand art history. While neither Henderson nor Hope can be described as 'political' in postliberation terms, the 'reclaiming' of their roles in our art by such shows is very encouraging. 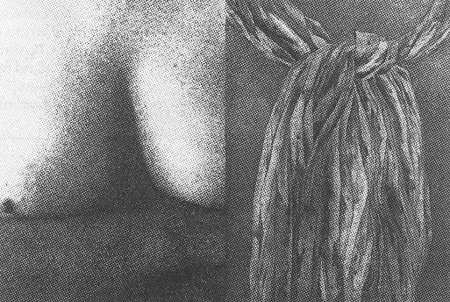 There is no confusion, however, about the political position of Carole Shepheard, who showed a collection of prints, Body Covers, at Portfolio Gallery in April. Her own commentary on the show stated: 'Identification and acknowledgement of female experiences are important aspects of feminist art for me, and although difficult to interpret because of the damage of the past in areas of paintings of women, there is a need to explore more fully the strength women have now in themselves, their bodies and their lives.'

Shepheard's attempt to record women 'as they honestly are, rather than as some might wish them to be' refers to that historical manipulation of nude women into objects of male scrutiny and sexual use that she referred to in the earlier statement. She attempts a corrective in two ways. Her bipartite images juxtapose the 'less obvious areas of sensuality' which her figure studies portray with images symbolic of strong personal relationships. Secondly, and stylistically, she reinforces this juxtaposition by using a diffused photo-etching technique for the figure studies, thus giving a sensual and tender quality to the images. This is then contrasted with crisply drawn images, using decorative patterning close to the surface for the gift/object panels. The complementary nature of he images is striking. Carole Shepheard is right about the difficulty associated with images of naked women, for male or female artists; she has confronted that difficulty directly and convincingly here.