Debra Bustin is a young Wellington artist who has exhibited a large number of works in the last year. At the Bowen Galleries, rooms were transformed into total environments for brightly-coloured, shiny-surfaced structures which convey the dynamic quality of growing creatures. The impact on the senses was immediate and the entertainment aspect of her work was increased by the presence of a magician and musicians on opening night. The individual pieces relate to one another and are themselves the opposite of reductive; Bustin has a process of working which has led to the invention of many forms, following through every possible variation.

Bustin's formal conventions are those of Calder and Oldenburg but, whereas the early Oldenburgs were made of plastic-coated muslin, Bustin uses wire to dangle forms in front of the larger painted surfaces and tape to create the surfaces. Taking a method of construction as a starting point Bustin has allowed the possibilities which the materials offer to dictate the kind of objects that can be created. In doing so she has developed her own language, in which painted wire protrudes from the 'canvas' to make 'drawings' in three dimensions, the picture-plane of the painting is cut and lifted out in great zigzag shapes, and leaf/wing/ claw forms are like little paintings connected to the larger one by twisted wires. 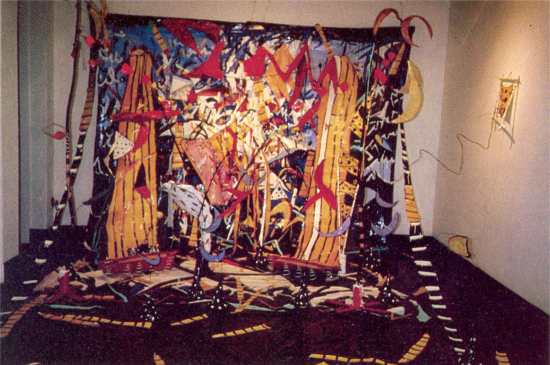 The context of the work is possibly larger than that of art (art commentators in Wellington have made references which range from Miró, Pollock and Debra Bustin's teacher, Robert McLeod to Calder, Gorky and Oldenburg to counteract previous reviews which suggest that a completely new art form has been created1). Bustin's work has a vitality which also draws on the contemporary world of 'Punk' colour and dress. She has a large box full of things she likes: wire, enamel paint and tape are joined by feathers, earrings, branches, chairs and a drum.2 Paint colours are primaries, with an occasional pink or green; objects are outlined in black, bringing the visual imagery into an area of cartoon drawing. In the later Wellington City Art Gallery exhibition, a kind of popular imagery has been added - that of the picture post-card: snow-capped mountains, green grass, blue sky carried into the nonsensical with sun and stars and with a cone-like growth, red and white striped, from which hangs a dancing human figure of wire. On the floor stands an object which is coloured yellow with black spots, extending a claw towards the three dimensional painting on the wail.

The colour is gaudy, yet kept in tight control: the largest piece (which utilizes the longest gallery wall by the daring placing of a row of the smallest constructions as well as a three-dimensional end-wall piece incorporating a mechanical kinetic part) has a background surface of blue, a slashed open area of white with flaps folded back, a twisted pink canvas coming forward, two yellow strips protruding even further, and red kept for a sort of washing-line arrangement in the foreground from which red diamond shapes hang. Within this scheme all the other forms are held in a fine balance of subordination: half-moon shapes, yellow balls and 'ladder' forms in black and white dance crazily, threatening visual chaos.

Although the second Wellington exhibition seems unwieldy, with the area of plastic-covered walls and floor becoming a dominant factor, and the dribbled paint and the evident speed of execution emphasising the sense of the ephemeral, a comparison of the two exhibitions, only a few months apart, allows the developments of Bustin's formal aesthetic to be examined.

There is a quality of inventiveness and stamina in the following through of ideas that is considerable. In the first of the two exhibitions Bustin used bamboo to make stretchers for the paintings; and, when the wet paint of the surface dried, the stretchers twisted. Bustin incorporated this chance happening into future works, so that in the second show there is a painting with a deliberately twisted support. Also in the first show was a work with sausage-like shapes protruding from pockets in the pierced surface of the picture-plane. This idea has been developed so that the twisted canvas in the later exhibition has long painted 'sausages' thrusting through the canvas, extending to about twenty centimetres on either side.

Other variations on the stretcher and picture-plane include the use of wire as a stretcher, and the painted surface suspended within, rather like a trampoline in a vertical position; a ladder of wire with only some of the spaces between the rungs covered to make a painted surface,- and canvases which are attached to their stretchers on three sides, with the bottom end failing to the floor and brought forward to provide a carpet for the animated standing objects. Sometimes canvas is knotted to the stretcher; sometimes it is perforated with sections pulled forward; and at others the canvas is layered and resembles a stage-set in its construction.

No analyses can fully convey the gaiety and exuberance of the impact on anyone entering a Bustin environment. The artist has worked consistently since leaving art-school in 1979, and holds an Arts Council grant this year to continue working in New Zealand.