Bill Brandt is the most eminent living British photographer. His photographs of the last fifty years are a determined expression of neo-romantic traditions in Britain's art. Brandt received his early education in Switzerland and Germany and was, essentially, a foreign resident for the first thirty years of his life. Paris, not London, was his earliest settled home. He trained in the studio of the surrealist photographer Man Ray between 1929 and 1931. Brandt's background also lies with those first comprehensive photographers of Paris: Eugene Atget and Brassai. Atget had surveyed 'Old' Paris between 1899 and 1922 with an eye that was dispassionately engaged in documenting change. Brassai concentrated on the nocturnal life of the city's inhabitants.

When Brandt emigrated for 'home' it was more as a European than British citizen. Brandt's achievement is that of having modernised a photographic tradition by transferring it to another country and widening the social base of his subject-matter. In his crucially modernist 'photo plus text' books A Night in London (1936), The English at Home (1938) Camera in London (1948), Brandt produced the profoundest visual document of British life in London since John Thomson's Street Life in London of March, 1876. A key to Brandt's neo-romantic stance is his regard for Giorgio di Chirico's work; in Camera in London he wrote: On an assignment I was looking for pictures to show autumn in Bayswater. I went and looked at a street I already knew well ... I felt a sense of futility looking at it again. I had better give it up. I felt tired and it was getting late. Perhaps I really needed some dinner. I stared absent-mindedly at some leaves in the gutter and forgot the picture I was looking for. Then I glanced up. There was the street suddenly lit by a low sun. The houses, brilliantly white, a mauve coloured thundery sky, were throwing gigantic shadows across pavement. The sun was rapidly sinking behind some distant roof tops. but for a minute or two this street in Bayswater had something of the dream-like atmosphere of an Italian piazza in a Chirico painting. There was all the nostalgia of an autumn afternoon, and there was my picture. 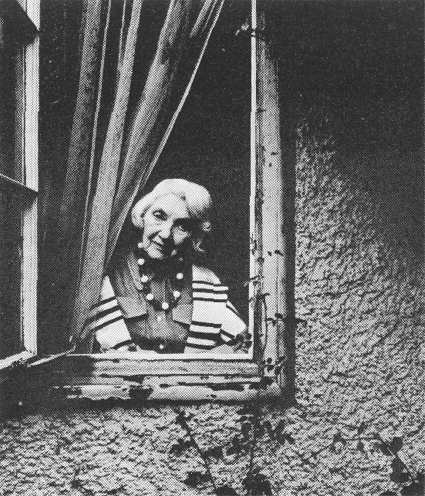 Brandt's photographs show the 'old order' changing into another form of British life. This publication is specifically a collection of portraits. Every person included here is a well-known, mid-century cultural avatar. They are all recorded by Brandt as either in direct communication with the photographer or contained within a private reflection. The photographs continually stress notions of a private life in a gothic drama. All Brandt's sitters are melancholic, intense members of first world society living in the spaces between relaxation and tension. By excluding ordinary people, people who are most often anonymous, Brandt has denied what they can contribute to the contemporary meaning of photographic portraiture. His 1937 Coal-miner's bath and Parlourmaid preparing bath before dinner, from The English at Home, go beyond a portrayal of individuals to indicate their position as social representations.

Francis Bacon Walking on Primrose Hill, London (1963) is an image of purposeful movement within a landscape at dusk. This frightening photograph exudes the strength of alienation observed in the pictures of Paul Nash, Hamish Fulton and Gwen John. Bacon walks on the contemporary painter's 'Pilgrim's Way', in a significantly deep space which is fully focused. Tom Hopkinson. the editorial force behind Picture Post magazine, wrote that the decisive feature of Brandt's photography was 'its sense of mystery ... there is a sense of justice and social contrast ... there is a sense of imminence, of something eerie just about to happen'.

The prints that Brandt supplied for this book undoubtedly concerned his publishers who stated, 'Bill Brandt has personally supervised reproduction of his prints, and has given his full approval to the final appearance of the pictures in the book'. Alan Ross, in a perceptive introduction, states that the print quality is impeccable. It is likely that Brandt's retouching with pencil, pen, and knife will not be evident to many who use this book for these changes are not directly obvious. But they are intrusive, and something that is, at present, aesthetically antithetical to both the Ansel Adams and Henri Cartier-Bresson 'Schools' of photographic practice. Duane Michels is the only contemporary photographer who uses surface retouching of final prints because he wishes to complicate senses of depth within the photograph's picture-plane.

All the plates are reproduced full size: a practice in design that can often refuse to recognise the size requirements necessary for the most powerful arrangement of images. For instance, Brandt took two portraits Of Edward Gordon Craig at Vence, in Alpes-Marine during 1956. Both are equally strong images of Britain's first modernist stage designer. Some other portraits are not included, the most important of these being Francoise Rosay, Belgravia, London (1943) and Joan Miró in his studio at Calmayor, Majorca (1964).

The captions of the portraits are also, perhaps, too brief. At other times Brandt has labelled his portrait of J. B. Priestly as J.B. Priestly relaxing in the grounds of a Bournemouth hotel. These 'grounds' have the finest collection of late victorian British sculpture, in a public place, in southern England.